Update: as expected, moments after the first circuit breaker was lifted, the furious selling returned, sending the Borsa Istanbul down 7.1%, and triggering a second circuit breaker for the day.

The local market collapse is an ominous signal because until Friday, stocks had generally offset the collapse in the lira, reaching all time highs before the relationship suddenly snapped over the past two trading days. Meanwhile, in USD terms Turkish stocks have continued to drift lower and are now back to levels last seen in 2004, confirming that the stock market is not a viable store of value during hyperinflation. 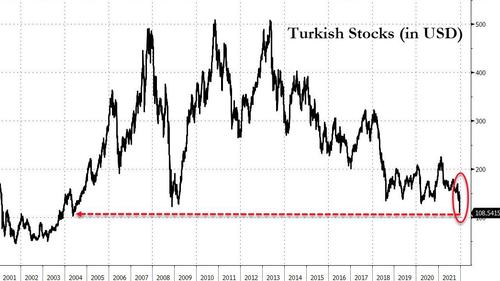 Turkish stocks crashed again following Friday’s historic rout, prompting a fresh automatic marketwide trading halt after the lira slid to a record low following Erdogan’s latest comments that he would not allow rates to rise. The Borsa Istanbul 100 Index tumbled 5%, after climbing as much as 3.1% earlier. Trading was set to restart at 4:23 p.m. Istanbul time, according to the bourse’s statement. 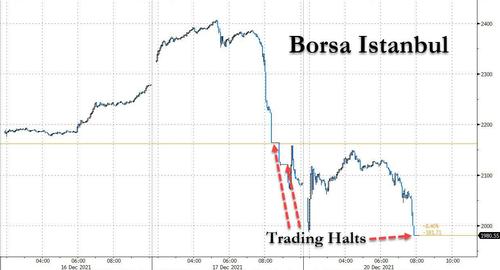 This was the second session in a row that Turkish equities’ trading is halted due to sharp losses. The index plunged as much as 9.1% on Friday, triggering automatic circuit breakers during the second-steepest selloff of the year. The slump was made worse by high levels of margin trading among local investors who have borrowed funds to join a recent rally in stocks.

While the exchange has since reopened, it is now down -6.7% and on pace for a second consecutive circuit breaker of the day.

Meanwhile, the plunge in the lira continued, dropping to a fresh all time low of 17.84 against the dollar as of this post, after Turkish President Recep Tayyip Erdogan pledged to continue cutting interest rates, referring to Islamic proscriptions on usury as a basis for his policy. 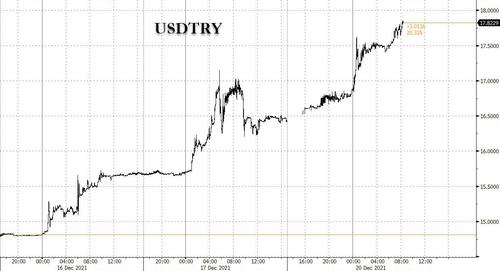 The lira’s 58% decline this year in the wake of 500 basis points of central bank rate cuts has sent local investors flocking to stocks to shield their savings, making Istanbul among the best-performing markets of 2021 in local currency terms, but the worst when measured in U.S. dollars.