China cut its benchmark lending rate for the first time in almost two years on Monday providing support to an economy showing strain from a property slump and sporadic coronavirus virus outbreaks, the SCMP reported. The one-year loan prime rate (LPR) – on which most new and outstanding loans are based – was cut from 3.85% to 3.8% at the December fixing, while the five-year LPR – which is a reference for mortgages – remained at 4.65%, according to the People’s Bank of China (PBOC). 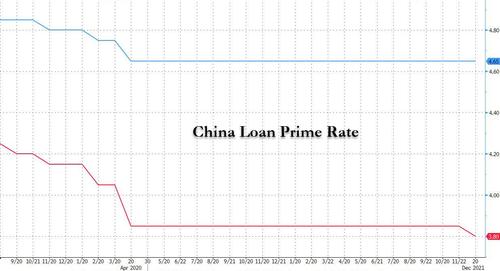 “The People’s Bank of China authorised the National Interbank Funding Centre to announce that on December 20, 2021, the market quoted interest rate (LPR) for loans is 3.8 per cent for one-year LPR and 4.65 per cent for five-year or longer LPR. The above LPR is valid until the next LPR is issued,” said the PBOC statement on Monday.

An earlier decision by the PBOC to lower banks’ reserve requirement ratio came into effect in the middle of last week, freeing up 1.2 trillion yuan (US$188 billion) worth of long-term funds.

The LPR – also known as China’s Libor – has been considered China’s de facto benchmark funding cost since 2019. The rate is decided by a group of 18 banks and is reported in the form of a spread over the interest rate of the central bank’s medium-term lending facility.  It remained unchanged for 20 months having last been adjusted in April 2020, in the immediate aftermath of the covid shutdowns, when the one-year LPR was cut from 4.05% to 3.85%.

“The cut reinforces our view that authorities are increasingly open to cutting interest rates amid looming economic headwinds,” said Xing Zhaopeng, senior China strategist at ANZ. However, he noted the decision to keep the five-year rate unchanged showed Beijing preferred “not to use the property sector to stimulate economic growth.”

“[The] cut will immediately feed through to outstanding floating rate business loans and should also lead to cheaper loans for new fixed rate borrowers,” said Mark Williams, chief Asia economist at Capital Economics, who described the one-year LPR as “another modest easing step”.

“We expect a cut to the five-year LPR before long which will make mortgages slightly cheaper and help official efforts support housing demand” adding that he expects “a further 45 bp of cuts to the one-year LPR during 2022.”  The PBOC has already pushed banks to increase the volume of mortgage lending.

“There was a marked increase in new mortgage issuance last month: targeted support for property buyers does appear to be limiting one of the more severe downside risks facing the economy.”

Last week, an influential Chinese think tank said China should lower interest rates and boost infrastructure investment to ensure the economy will grow by at least 5% next year. China’s year-on-year economic growth is expected to drop below 4% in the fourth quarter of 2021, way down from a 18.3 per cent rise in the first quarter. The fast decline has fueled concerns of an economic hard landing, triggering calls for more supportive measures.

“We expect a further 45 basis point of cuts to the one-year LPR during 2022. Just as important is what happens to quantitative controls on credit, including on borrowing by local governments. Early signs are these will be relaxed, but not greatly,” added Williams.

“The overall impression, including from [Monday’s] announcement, is that policy is being eased but not dramatically.”

Commenting on the cut, Tommy Ong, managing director for treasury and markets at DBS Bank said that there’s still a chance for the PBOC to cut its medium-term Lending facility in the near term, as the decision to lower the loan prime rate first was likely because it has a more immediate effect.

“Early last year PBOC cut MLF in two steps by 0.3% in total, while they cut LPR by the same magnitude,” says Ong. “It is only a matter of timing. Since this is an unsecured loan benchmark, it is better suited for the SMEs as compared to the MLF that is a lending rate with collateral.”

Yan Se, chief economist at Founder Securities, said China’s central bank lowered its interest rates by a smaller margin than global peers during the height of the pandemic last year, giving it room for additional easing now. He expects Beijing to lower interest rates on the central bank’s medium-term lending facility (MLF) by 10 bps in the first quarter of 2022, followed by more LPR reductions.

However, Li Wei, senior economist for China at Standard Chartered, expects no broad-based RRR cut or policy rate cuts in 2022.

“We maintain our call for no change in the seven-day reverse repo rate and the one-year MLF rate in 2022, as major central banks are expected to tighten monetary policy and China’s CPI should trend higher on PPI pass-through and rising pork inflation,” Li said.

Race to Cut Carbon Emissions Splits US States on Nuclear