While Cathie Wood’s ARKK has plunged about 15% this year – at the same time major market indexes are all up over 20% – the asset manager has doubled down on the strategy of general lunacy and, sounding like a guy standing next to the scratch off lottery ticket dispenser at your local 7-11, is now claiming that she’s “really concerned” that investors leaving her funds now are leaving on “downward momentum” and that they’ll miss the next swing higher.

Wood has called this pullback in most ARKK components “one of the best buying periods for her strategy,” Yahoo News/Bloomberg reported this week.

The “asset manager” said during a webinar organized by Bloomberg Intelligence this week: “Our concern for our clients is so significant that I get really upset when I think that they’re selling at the low or the other way around is buying into the high. At the high late last year and into January and February, I was saying, ‘We’re going to have a correction, keep some powder dry, keep some powder dry.’”

Now that U.S. listed Chinese names have also collapsed, Wood – who happened to be close to Archegos’ Bill Hwang, and his investments – talked about her foresight to hold off on investing in those names. 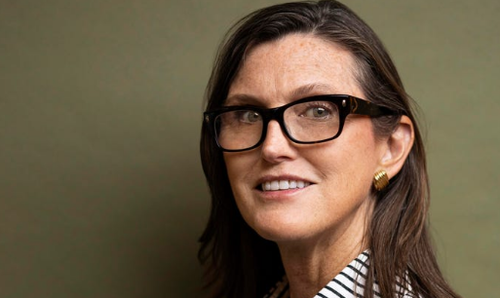 “We don’t think it’s true that China is un-investable. We’re just waiting for the valuation dust to settle and make sure the incentives for growth re-emerge,” she said, calling China a “very innovative nation”.

She also reaffirmed her allegiance to Tesla’s Elon Musk, who has peeled off billions of dollars worth of stock over the past two weeks. Wood commented:  “Tesla wants to save us from ourselves – wants to save humanity. Elon Musk is so convinced that we need to change our ways in terms of transportation and the environment that he’s dedicated his life to it.”

Tesla has been one of the sole saving graces of an otherwise laggard group of companies behind ARKK.

Hilariously, Wood also spoke out about funds who are “greenwashing” by claiming to be ESG when they aren’t: “We do not use the acronym ESG with our portfolios, but we will tell you when we’re asked the questions that our portfolios are intrinsically ESG.”

Wood concluded by claiming that the carbon footprint for her ARKK fund is 10% of the S&P. Sure thing, Cathie.