House Speaker Nancy Pelosi is considering a plan to hold votes on both massive spending packages next week – the (now) $1.75 trillion social welfare bill that Sen. Joe Manchin (D-WV) has tentatively signaled support for, and the $1.25 trillion infrastructure package that House progressives vowed to shoot down unless the first package is passed at the same time. 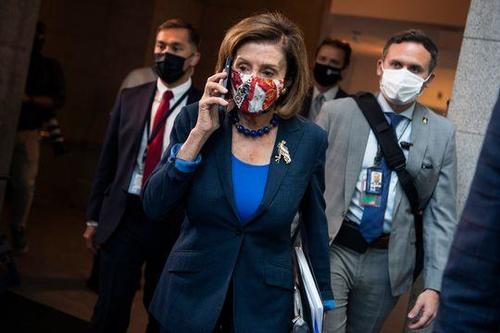 According to the Washington Times‘ Haris Alic, citing “A source close to Democratic leadership,” no official decision has been made – however there’s growing pressure to “move forward” as President Biden represents the increasingly chaotic United States while traveling abroad amid all-time low approval ratings. 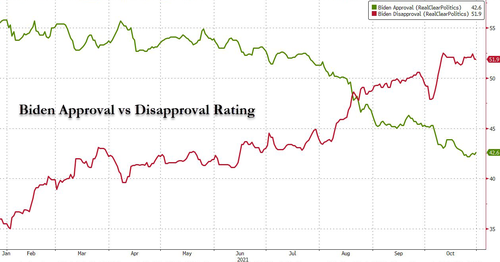 We have a brand new NBC News poll out this morning that’s filled with tough news for Democrats.

The country is headed —
In the right direction: 22
On wrong track: 71

More via the Washington Times:

Earlier this week, Mrs. Pelosi underscored the high stakes facing Mr. Biden as he prepares for meetings with leaders from the world’s 20 major economic powers and attends the U.N. Climate Change summit in Glasgow, Scotland.

“What this legislation will do is to help the president meet his goals, the goals of America,” said the speaker. “When he goes to meetings with the G-20 now and then to meet His Holiness, the pope, and to go to Glasgow, we want him to go as strong as possible.”

It remains to be seen whether progressive Democrats agree.

The 98-member Congressional Progressive Caucus has long said the infrastructure and social welfare bills are linked and will have to pass together. A significant hurdle towards that goal was overcome earlier this week when Mr. Biden agreed to a 1,684-compromise framework on the social welfare bill.

“We have the text, that’s what we needed,” said. Rep. Pramila Jayapal, a Washington Democrat who chairs the CPC.

Meanwhile, Bernie Sanders says not so fast – saying on Sunday that he wants to hash out what’s in the $1.75 trillion package of social benefits before it goes up for a vote in the House.

“I think there has got to be a framework agreed upon in the Senate that all of us know is going to be implemented before the members of the House vote,” Sanders told CNN‘s “State of the Union.”

“You don’t have to have all of the legislative language, but you have to have a statement which says A, B, C, D and E is going to be in the package and 50 members of the Senate are supporting it,” he added.

According to Sanders, he spent “all of yesterday on the telephone” in an effort to include provisions designed to cut prescription-drug prices,” adding “The fight continues.”

“That bill is still being worked on literally today. It’ll be worked on tomorrow. I believe we’re making some progress in making it even stronger than it is,” he continued. “I think we can put that together within the next short period of time.”

In short, next week is make-or-break for the Democrats.