In the aftermath of the ugly 2Y auction at 1130am, moments ago the Treasury followed up with its second coupon auction of the day when it sold $61 billion in 5Y notes. And unlike the “gruesome” tailing 2Y sale, this time demand was far more solid.

Printing at a high yield of 0.990%, the auction stopped through the When Issued 0.994% by 0.4bps, even if it too was the highest yield since February 2020 and decidedly above last month’s 0.831% now that the Fed’s tapering is officially in play.

The Bid to Cover came in at 2.37, which unlike the near record plunge in the 2Y BTC was actually a modest improvement to last month’s 2.35, and also printed right on top of the six-auction average. 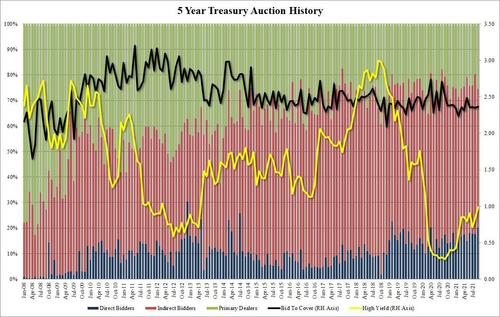 Overall, compared to today’s 2Y debacle, the 5Y auction was a decidedly stronger appearance, if leaving a bit to be desired.