Authored by Mark Glennon via Wirepoints.org,

President Biden and his allies in Congress are having a rough time winning support for a new, historic, gigantic spending plan, but they knew who to call for help.

On Friday, Gov. JB Pritzker joined Biden on a Zoom call to with local reporters to make the case for the pending federal legislation.

You may know the bill as the “$3.5 infrastructure bill,” which is what it has been commonly called in the media.

But that’s just a testament to media distortion. It’s not $3.5 billion and it’s not infrastructure. 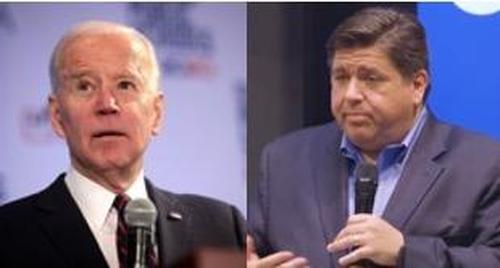 The true cost is likely to be $5 to $5.5 trillion over ten years according to the bipartisan Committee For A Responsible Budget.

A primary gimmick being used, it said, is pretending that programs intended to be permanent expire, which they say obscures “the true cost of the legislation and put program beneficiaries at risk.”

A Wall Street Journal editorial detailed various “time shift gimmicks” and also explained how some states will be stood up for paying, on their own, part of the cost of new, universal pre-K entitlement and free community college. Hence, their preface: “Behold one of the greatest fiscal cons in history.”

“The press has reported almost none of this,” said the Journal about the phony cost estimates.

The Biden’s Administration’s answer to the cost issue is astonishing, even by its standards. The cost is actually “zero,” they say. Biden himself said the cost is “nothing.” On what basis? They claim they will raise taxes enough to cover the cost.

How’s that for chutzpah? As long as you are billing taxpayers, you can say it costs nothing.

And infrastructure is only a small part of what it’s about, even by CNN’s charitable description: “The sweeping 10-year spending plan marks the biggest step in Democrats’ drive to expand education, health care and childcare support, tackle the climate crisis and make further investments in infrastructure.”

The bill in fact includes a massive expansion of multiple government dependency programs, which CNN tried to list, based on “what we know so far,” as they candidly put it last week. Does anybody really know besides a few insiders?

Adding to the guesswork, House Speaker Nancy Pelosi signaled over the weekend that the size of the bill may be negotiated down, but she also said the first vote may come as early as today, Monday. If that happens, don’t expect most members of Congress to have an honest understanding of what they will be voting on.

What’s most troubling is the timing of the expansion of dependency programs. If ever there was a time to move people out of government dependency and into employment it is now. It doesn’t get any better than this. Jobseekers today have the best job market in American history – over 10 million jobs are unfilled while just 9 million are unemployed. Many employers are desperate for workers. The bill’s supporters, however, measure success by how many can be added to government programs.

The U.S Chamber of Commerce has it right: “This reconciliation bill is effectively 100 bills in one representing every big government idea that’s never been able to pass in Congress,” Chamber President and CEO Suzanne Clark said. “The bill is an existential threat to America’s fragile economic recovery and future prosperity. We will not find durable or practical solutions in  one  massive  bill that  is  equivalent to  more  than  twice the  combined  budgets  of all 50 states.”

Getting back to the Pritzker and Biden Zoom call with local reporters, why did they do it that way? Why not also release the tape of the call so we could see for ourselves? Instead, we got only the media’s post-digestion remains. Dare I say that we should be suspicious of how Biden and Pritzker deal with questions and the media, and with what comes out at the end?

If the subsequent reports in Crain’s and the Chicago Tribune are correct, Pritzker spoke primarily about the expansion of benefits directed toward children. One is child care, lack of which “is holding back our recovery,” he said.

Child care costs no doubt have always been a problem that keep some people from working, but did it occur to any of the reporters on the call to ask Pritzker this: Why would child care be more of an issue today, with the state’s unemployment rate at 7%, than it was before the pandemic when the rate was under 4%? To our knowledge, nobody ever asks that question.

And think about the expansion of the per-child tax credit in the pending legislation, which is the most expensive element in the bill. In concept, that’s a popular idea and has significant bipartisan support, primarily because it is projected to lift many out of poverty. The credit would be for $3,000 to $3,600 per child, depending on age.

But it’s hardly for the poor alone. The credit does not even begin to phase out until relatively high income levels — $75,000 for single parents and $150,000 for married couples. There would be no work requirement to get the credit, and the pending bill would end long-standing rules requiring a child to be a relative of the person taking the credit, as CNBC reported. Instead, whoever is caring for the child could take the credit, regardless of whether they’re related. Seems like a formula for abuse and a step toward making the federal government the family provider.

Whatever the issues are with the pending legislation, Pritzker undoubtedly is thrilled with the prospect of more federal cash flowing into Illinois. That would allow him to kick the can again on addressing the state’s structural deficit, and continue to announce program after program of new spending as he has been doing recently with federal assistance already received.