Just days after Pyongyang said they’re open to “constructive” talks with South Korea, and two weeks after the rogue nation fired a “new type long-range” cruise missile, South Korea’s Yonhap News Agency reports North Korea fired at least one unidentified “projectile” from its eastern coast Tuesday. The latest tick-up in missile firings comes as tensions between the U.S. and China continue to boil, and a US British warship sailed through the Taiwan Strait on Monday.

Details are scant at the moment, and there’s no confirmation if the projectile was a ballistic missile banned under U.N. Security Council resolutions and or how many were fired and how far it traveled.

“Tuesday’s launch could be designed to test whether the South would still brand it as a provocation,” Yonhap said. It was noted the projectile landed in the Sea of Japan. 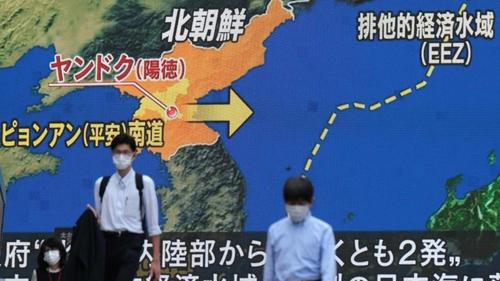 Three days ago, the powerful sister of North Korean leader Kim Jong Un, Kim Yo Jong, made a surprise statement indicating Pyongyang would be open to talks with South Korea but on condition that Seoul would press the Biden administration to relax the U.S. continued crippling sanctions on the isolated country. The latest firing may indicate talks are not going well.

Two weeks ago, North Korea test-fired a “new type long-range” cruise missile that would give the country a “strategic significance of possessing another effective deterrence means for more reliably guaranteeing the security of our state and strongly containing the military maneuvers of the hostile forces,” North Korea’s state-owned media KCNA said.

If the projectile is confirmed to be a ballistic missile, it would be the third launch this year.

Today’s launch most likely had Beijing’s full blessing (if not direct order) as Sino-U.S. relations continue to deteriorate.