Update (1550ET): Just minutes before the market closed on Monday, the Dallas Fed Bank CEO and President Robert Kaplan announced that he is planning to retire on Oct. 8, 2021.

In a statement, Kaplan said it had been his “great honor” to lead the Dallas Fed for the last six years. But unlike Rosengren who blamed health issues for his decision to retire, Kaplan noted in his statement to the public that his recent trading controversy had created “a distraction to the Federal Reserve’s execution of that vital work.”

It has been my great honor to serve as the President and CEO of the Federal Reserve Bank of Dallas for the past six years and to work with the superbly talented professionals at the Bank who are helping to build a stronger economy for all communities in the Eleventh District and our nation. It also has been a privilege to work with my Federal Reserve System colleagues and serve as a member of the Federal Open Market Committee. The Federal Reserve is approaching a critical point in our economic recovery as it deliberates the future path of monetary policy. Unfortunately, the recent focus on my financial disclosure risks becoming a distraction to the Federal Reserve’s execution of that vital work. For that reason, I have decided to retire as President and CEO of the Federal Reserve Bank of Dallas, effective Friday, October 8, 2021. During my tenure, I have adhered to all Federal Reserve ethical standards and policies. My securities investing activities and disclosures met Bank compliance rules and standards. I am proud of the work we have done at the Dallas Fed during the past six years and am confident that my colleagues will continue to play a vital role in supporting our nation’s economic recovery.

We are grateful for Rob’s six years of service as President of the Federal Reserve Bank of Dallas and as a valued colleague in the FOMC. He has been a passionate and forceful public voice on a wide range of issues, including the critical value of early childhood education and literacy. In addition, he strengthened the Bank’s economic research and played a very constructive role in Systemwide management, budget and technology efforts. We wish him well.

Under Rob’s leadership, the Dallas Fed has elevated its role as a convener to bring interested people together to solve problems that are restricting the economic performance of their communities. Rob was able to accomplish these things by emphasizing talent development at the Dallas Fed with a focus on diversity, equity and inclusion.

So, while the Board of the Dallas Fed understands Rob’s motivation to put the Federal Reserve System above any personal considerations, we accept his retirement with deep regret and believe the nation and the Eleventh District will feel the impact of the loss of his leadership.

The Dallas Fed board thanks Rob for his many contributions and wishes him the best in his future endeavors. He will be missed.

Fortunately for the Dallas Fed, First Vice President Meredith Black has graciously agreed to delay her impending retirement to serve as interim president during this transition.

In other words, Kaplan copped the the air of hypocrisy created by the he and his colleagues trading (and the public backlash to it).

A few weeks ago, Kaplan and Rosengren promised to dump their entire equity portfolios following the “outrage” generated by their trading scandals (Kaplan executed the most and largest trades among his colleagues, often making trades in the multi-million-dollar territory.

Some joked at the time that the whole controversy was a setup to allow the Fed leaders to dump their portfolios at the top.

The big question now is what will Fed Chairman Jerome Powell do? Will he also step aside? Or will he hang on to his post? Speaking during the Q&A last Wednesday, Powell said he had “nothing for you on that today”, a reference to his reappointment as Fed Chairman and whether the trading scandal might have an impact on that? At another point during the briefing, Powell said much of the trading conflicts he raised involved small lots of securities, like muni bonds he purchased years ago, long before he could have foreseen that the central bank wold be buying munis as part of the Fed’s emergency pandemic-inspired asset-purchase program.

At this point, the Fed should hire Ted Lasso to help “motivate” the remaining Fed branch bank heads (and board of governors’ members) to avoid their day-trading losses.

Boston Fed President Eric Rosengren, one of the senior Fed officials caught up in the trading disclosures scandal earlier this month, has abruptly decided to retire on Sept. 30, newswires report. 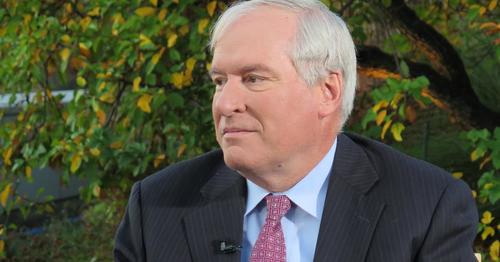 His first vice president, Kenneth Montgomery, will assume the role of interim president and CEO of the Boston Fed bank until a permanent replacement can be found. But crucially, as of now, Montgomery will be the one casting the Boston Fed’s vote on the FOMC starting next year, unless a permanent replacement for Rosengren can be found more quickly.

While many have already likely assumed Rosengren’s departure is related to the trading ethics scandal (and he was not the only senior Fed official to have been ensnared, with his colleague Robert Kaplan in Dallas and even Powell to an extent), according to Rosengren, he has a kidney condition, and staving off dialysis is dependent on him making “lifestyle changes”. Previously, he had planned on retiring in June 2022, in according with the mandatory retirement at 65 rule.

In a message to the Bank’s staff, Dr. Rosengren revealed for the first time that he qualified for the kidney transplant list in June of 2020, during the pandemic, upon the worsening of a kidney condition he has had for many years. Delaying the need for dialysis might be improved if he makes lifestyle changes now to lessen the risks of his condition.

Rosengren said, “It has been an honor to serve at the Federal Reserve System, in a job where one can be constantly engaged in pursuing the economic and financial well-being of the country and New England. I know that my colleagues will build on our progress, and continue making a difference for the public we serve.”

There were notably calls from some for the officials involved to step down from the Fed in the wake of the ethics scandal. Chair Powell has already ordered a formal review.

Fed Chairman Jerome Powell has already released a statement: “Eric has distinguished himself time and again during more than three decades of dedicated public service in the Federal Reserve System. He led the Fed’s work in managing several emergency lending facilities in two separate periods of economic crisis. In addition to his monetary policy insights, Eric brought a relentless focus on how best to ensure the stability of the financial system. My colleagues and I will miss him.”

As has Dr. Christina Paxson, the president of Brown University and chair of the Bank’s board of directors: “Eric’s leadership has been outstanding on so many fronts. As a result of his tireless work, the Bank is making cutting-edge contributions across all its functions, and positively affecting the economic and financial security of people in New England and the nation. His commitment to ‘Main Street’ economic issues and opportunity for all has inspired his staff, colleagues, and countless others to innovate in service to the public. And let me add that Eric is one of those rare people who combines the highest standards of intellectual rigor with the warmest collegiality, inclusiveness, and humanity. The directors wish him the very best as he focuses on improving his health.”

Rosengren’s premature departure from the FOMC will have a major impact on the pace of Fed policy since he would have become a voter in 2022, and is known for his hawkish stance.

And as for Rosengren’s kidney issue, we can’t help but wonder: is this a recent development? It’s not for us to speculate but the timing certainly seems…curious.

Rosengren retires because of health issues. From a week ago: He “made as many as 37 separate trades in the four REITS while the Fed purchased almost $700 billion in mortgage backed securities”. https://t.co/81ubXGqmOI

While we trust Rosengren’s health issue is serious, some couldn’t resist cracking a joke (with a kernel of truth: Rosengren agreed to sell his entire portfolio of stocks after the trading disclosures).

Readers can find Rosengren’s complete resignation letter to Powell below:

20210927 Rosengren Letter to Chair Announcing Retirement by Zerohedge on Scribd

As far as succession goes, the Boston Fed’s search committee will consist of the six non-banker board of directors members, and will be chaired by Dr. Paxson. According to US = law, only directors not affiliated with regulated banks or financial institutions are eligible to help select a Federal Reserve Bank president. The choice must be approved by the Federal Reserve’s Board of Governors.