Dow 40000 – A Huge Disappointment Of Promises

Dow 40000 – A Huge Disappointment Of Promises

Authored by Lance Roberts via RealInvestmentAdvice.com,

Dow 40000! Yes, it will eventually happen. Such should not be surprising given the massive amounts of global liquidity chasing fewer assets. But while Dow 40,000 will undoubtedly bring out the “Party Hats,” it is also a massive disappointment of the promises made to investors.

“Nothing says bull stock market like the Dow Jones Industrial Average (DJIA) crossing another thousand-point barrier. The recent rise above 34K sparked a special interest. The 1,000-point move from 33,000 to 34,000 was the third fastest on record,’ and the Dow’s move was ‘its fourth thousand-point hurdle cleared this year alone.’ – John Tobey

If price acceleration in the market is a sign of investor optimism, this chart should undoubtedly support that view. 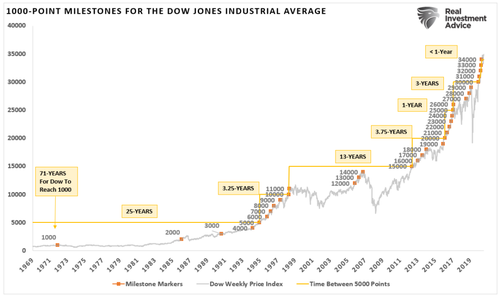 There were only three other times in history where the Dow advanced this rapidly:

Unfortunately, each of those periods ended in corrections and outright bear markets.

Maybe “this time is different.”

Or, it could just be that extreme exuberance by investors tends to be a later stage event.

What most investors tend to forget is the damage done by those market corrections and bear markets.

Here is a good example.

“Speaking from his annual investment conference in New York, Baron predicted the Dow Jones Industrial Average, based on historical moves over decades, will reach 650,000 in 50 years, with an over $500 trillion U.S. economy.”

If we do some quick math, that assumption requires a 6.6% annualized return on both the Dow and the U.S. economy. Such is undoubtedly in line with the economy’s long-term growth trends, and the charts below prove the point.

Of course, those returns are also what financial advisors promise clients who “buy and hold” an index-based portfolio.

Here is the problem.

It’s complete bulls*** on both counts.

Mr. Baron, as noted, was speaking at his “buy and hold” conference, and the tweet grabbed both attention and headlines.

The problem with being “bullish all the time” is that it is also perilous.

Such is particularly the case in late-stage “bull markets,” where seemingly ever-rising prices mask poor investment decisions and excessive portfolio “risk.” As a result, previously lousy investment ideas, products, and strategies tend to resurface in a different form or package. Investment strategies like “buy and hold” and “dollar cost averaging” become popular even though they are guaranteed to leave you well short of your financial objectives in the future.

The Economy No Longer Grows At 6%

Let’s start with the economy.

The economy has not attained an annualized growth rate of 6% since the 1950’s when the U.S. was the manufacturing hub of the entire world. Following WWII, the majority of Europe, and Japan following two nuclear bombs, got devastated. Today, the U.S. is no longer a manufacturing hub but a services provider for ever-lower costs. Services, as compared to manufacturing, have a very low economic multiplier effect. Given $28 Trillion in debt and climbing, attaining a sustainable 6% growth rate is not possible.

The chart below pretty much details the problem. 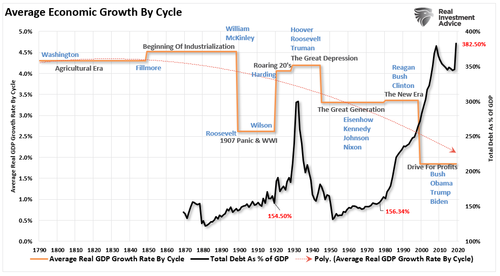 Many argue the U.S. economy has grown by more than 6% on average over the long term. (This is a true statement) However, it is also a very misleading statement. Average and actual growth are two very different things. 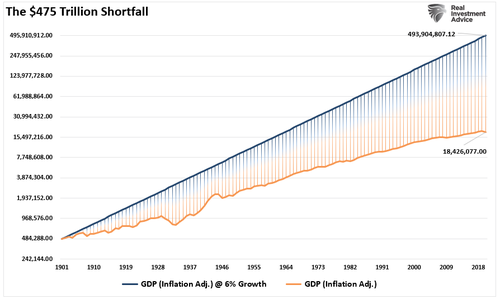 There were many years of low or negative economic growth.

The same factors hold with the Dow.

As noted, Mr. Baron suggests the Dow will rise to 650,000 in the next 50-years. So clearly, as a young investor, you should sock all your hard-earned savings into an “index fund” and hang on.

“The stock market is literally the same thing as a high-yield savings account.” – Jim J. (names have been changed to protect the stupid.)

The financial media states that markets have an average annual return of 8-10%. So, assuming the Dow had compounded at just 5% since 1901, we would already be past 650,000. 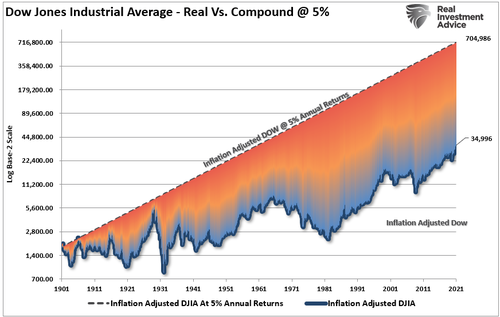 As with economic growth, there is a massive difference between compound returns and average returns. The historical performance of the markets since 1900, including dividends, has averaged a higher rate of return than just 5% annually. Therefore, the Dow should be much closer to 700,000 today than 650,000 in the next 50-years.

Why? Because crashes matter. Such is particularly the case when it comes to your financial goals and investment time horizons.

Think about it this way.

If “buy and hold” investing worked the way the media suggests, then why are the financial statistics of 80% of Americans so poor?

The three most significant factors are:

While lost capital gain eventually recover, the time lost “getting back to even” cannot be. Unfortunately, we don’t live forever, and time is our ultimate enemy. Such is also why, after two major bear markets, most “boomers” are simply unprepared financially for retirement.

Who wouldn’t love a world where everyone invests some money, the markets rise 6% annually, and everyone one’s a winner? 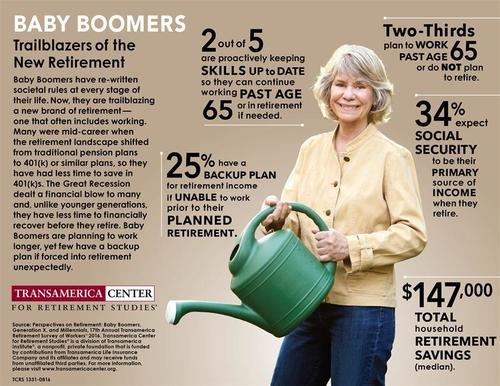 Unfortunately, markets don’t work that way. A vast difference exists between an “index” that benefits from share buybacks, substitutions and market capitalization weighting versus a portfolio invested in actual dollars. Yes, a “buy and hold” portfolio will grow in the financial markets over time, but it DOES NOT compound.

Read this carefully: “Compound returns assume no principal loss, ever.”

To visualize the importance of this statement, the chart below shows $100,000, adjusted for inflation, invested in 2000 versus a 6% annual compound rate of return. The shaded area shows the difference between the portfolio value and the 6% rate of return.

As noted, due to the impact of two bear markets, the investor that started in 2000 is still well short of the rate of return promised. The investor that began in 2007 only just recently achieved their goal. However, a bear market in the future will set them back markedly. 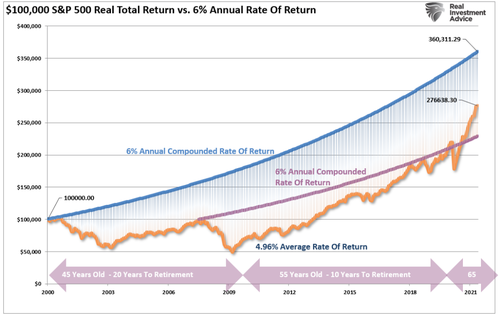 With markets now back to some of the highest valuations on record, forward returns over the next 10-years will be substantially lower than they have been over the past 10-years.

That isn’t being bearish. That is just math. 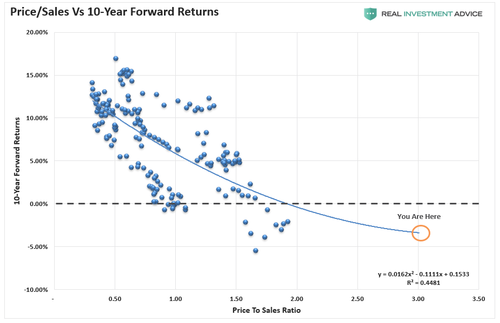 Throughout history, bull market cycles are only one-half of the “full market” cycle. Such is because during every “bull market” cycle the markets, and economy, build up excesses that are “reverted” during the following “bear market.”

Reversion To The Mean

As Sir Issac Newton once stated:

“What goes up, must come down.”

Looking beyond the very short-term overly optimistic view of “this time is different,” the coming unwinding of current speculative extremes will occur after completing the current market cycle.

When we look at 10-year trailing returns, there is sufficient historical evidence to suggest total returns will decline towards zero over the next 5-years from 12% annualized currently. (These are trailing 10-year total real returns, not forward) 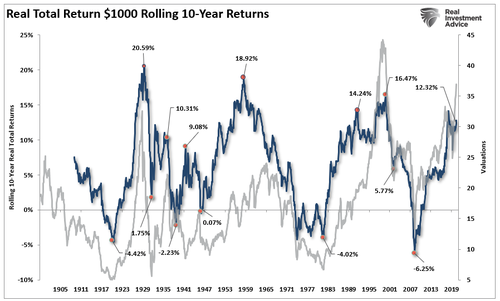 A decline in the next 3-years of only 30%, the average drawdown during a recession, will likely achieve that goal.

Why will a bear market eventually happen? It is a function of time (length of market cycles), math (valuations,) and physics (price deviations for long-term means.)

When will it happen, and what will cause it? No one knows.

There is one big secret in achieving long-term investment success.

“Being “right” in the first half of the market cycle is not as important as being “wrong” during the second half.”

You really should be disappointed in Dow 40,000.