The Italian public was shocked Thursday after a years-long legal drama resulted in an appeals court overturning convictions from a major mafia trial rooted in a string of shootings, bombings and assassinations going back to the early 1990s.

For many years there were widespread accusations that top Italian state officials were in collusion with powerful mafia figures, allowing the Cosa Nostra reign of terror based out of Sicily to operate with impunity and actually ramp up their brazen bombing and killing campaign against enemies and rivals, which also took many lives of innocent bystanders in busy urban centers. 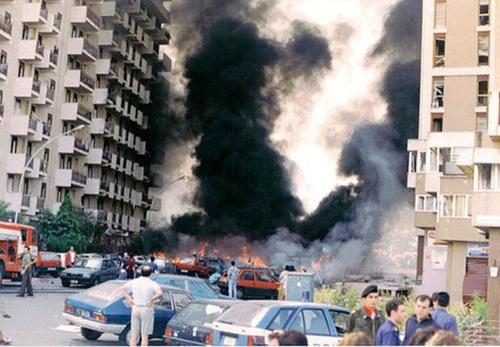 But as Reuters details, “In a ruling read out in the Sicilian capital Palermo, Judge Angelo Pellino said three former police investigators and a close associate of former Prime Minister Silvio Berlusconi had not committed any crime in the case which had captivated Italy.”

These included former senator Marcello Dell’Utri, and Mario Mori, Antonio Subranni and Giuseppe De Donno – all now acquitted by the appeals court. They had for years maintained their innocence.

Police and state officials had long argued that communications and “negotiations” with notorious mafia figures were necessary to protect society halt the violence, while prosecutors made a case that this had actually encouraged the mobsters’ open spree of violence and crime.

It’s being hailed as a “turning point” for Italian justice, while detractors of the decision have been shocked at what they see as a ruling which will only give impunity to state officials who turn a blind eye or willingly collude in mob-driven corruption of elected officials and police:

The case involved allegations state representatives had negotiated with the mob following a string of mafia bombs and assassinations that killed 23 people, including prominent anti-mafia magistrates Giovanni Falcone and Paolo Borsellino.

Former senator Marcello Dell’Utri, along with Mario Mori, Antonio Subranni and Giuseppe De Donno, have now been acquitted by a judge at an appeals court in Palermo. They had all maintained their innocence https://t.co/pnmsjgbd4n

The original verdict, now overturned, came at the end of an exhausting half-decade long trial which ended in 2018, but examined crimes that went back to the start of the 1990’s, as the Reuters report describes further:

According to prosecutors, talks between the mafia and the Italian state began after judge Falcone, his wife and three bodyguards were assassinated by a bomb under a motorway in 1992.

The state’s willingness to enter negotiations after Falcone’s murder encouraged further bombings, prosecutors said, including the one two months later that killed Borsellino because he had learned of, and opposed, the negotiations.

The following year Cosa Nostra stepped up the pressure with unprecedented mainland attacks on cultural and church targets, including Florence’s Uffizi Gallery. Ten people were killed in Milan and Florence.

The spate of these large-scale deadly attacks stopped in 1993, but led to accusations of police and government corruption and enabling the crimes ever since.

Italian prosecutors are now said to be examining the latest shock ruling and will decide if they want to take the appeal to the Supreme Court, something which is very likely as further angry reaction to the overturned convictions is felt among the Italian public and media pundits.