Europe’s energy crisis has claimed another victim, with Austrian fertilizer producer Borealis AG slashing the output of ammonia after the cost of the primary feedstock, natural gas, compresses margins in an industry already facing tight supplies, according to Bloomberg.

Borealis’ ammonia-producing plant uses natural gas to make fertilizer. The high cost of natgas makes fertilizer uneconomical to make. This is yet another sign of deepening woes for the industry after the UK government said it would provide “limited financial support” to help CF Industries restart one of its fertilizer plants this week.

The culprit behind surging natgas prices has been declining flows into Europe via Russia, though there are signs natgas shipments could increase in November. But that won’t alleviate high prices because stocks on the continent are well below average ahead of the winter season, indicating Europe’s energy crisis may drag on for months. 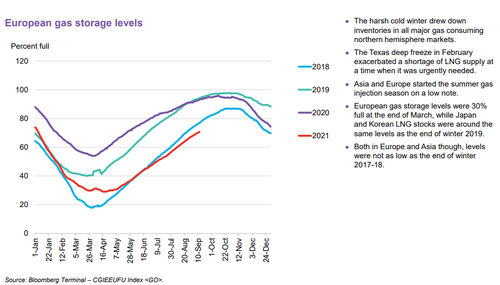 Disruptions of ammonia supply and other fertilizers have had a significant impact on the production of carbon dioxide supply in the UK, sending the industry into a tizzy and rippling through food supply chains, such as slaughterhouses to packaging to carbonated drinks to dry ice production.

Commodity analysts at CRU Group said half the continent’s ammonia capacity could be at risk due to dwindling production because of elevated natgas prices. Spot prices  of ammonia per ton in Western Europe have surged from around $225 per ton at the beginning of the virus pandemic to $700 per ton this month. 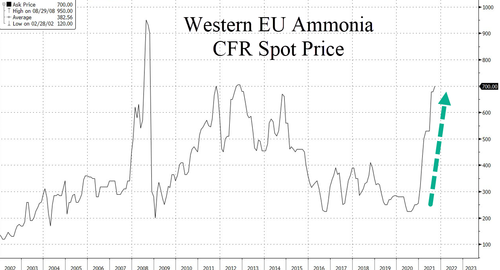 Borealis’ reduction in ammonia production is a sign the fertilizer crisis continues to ripple across the continent. The company said Thursday it would analyze the situation” regarding its plants in Austria, France, and the Netherlands – not much detail was given.

“This is an ongoing story. All the nitrogen producers in Europe will be reviewing what they do,” said Allan Pickett, head of analysis at IHS Markit’s fertilizer group, Fertecon. “With gas prices where they are, we would confidently expect that there will be significant pressure on many of the ammonia producers related to the fertilizer industry.”

Pickett said the fertilizer industry would remain under pressure as long as natgas prices remain high. There’s an increasing possibility that farmers may refuse to purchase fertilizer for the upcoming 2022 growing season because of high prices.

Bloomberg Intelligence analyst Jason Miner said the move by Borealis suggests “they’re running close to margins; otherwise, they wouldn’t have shut down.” He warned that “other plants will shut down unless natural gas prices change.”

A perfect storm of events, such as declining Russian natgas into Europe, triggering an energy crisis that now bears down on food supply chains in the UK and possibly Europe, has the potential to create widespread disruptions. As for the 2022 growing season, farmers might become hesitant to plant with fertilizer prices at high levels.