With Wall Street’s fascination with risk associated with Evergrande’s default fading fast, and the sellside pumping out charts such as this one showing that the contagion in China junk bond market is unlikely to spillover globally… 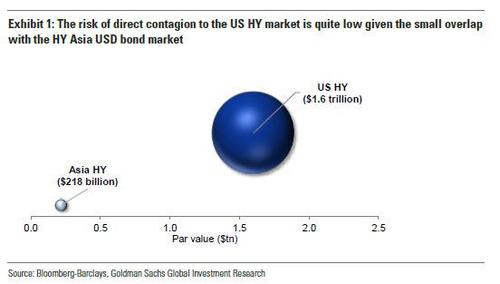 … the smartest men in the room are once again missing the forest for the trees because as we explained in detail over the weekend, and again reminded earlier this week…

Remember: for China this is not about Evergrande, it’s about preserving confidence in the property sector

… for Beijing the real risk is not whether foreign creditors are impacted – in fact Evergrande’s willingness to default on offshore bondholders while preserving operational cash flow and continuing to build homes shows just how much China “cares” about Blackrock’s P&L – but how an Evergrande crisis could impact China’s massive, $60 trillion, property sector, something which CCB International, the Chinese investment bank, touched on in a recent research note in which it said that Evergrande “contagion risk has spread from financing to land sales, property sales, project deliveries and home prices.”

And indeed, as the FT reports this morning, some very ominous cracks in China’s property market – which according to Goldman is the largest asset class globally – are starting to emerge.

In a letter to the Shaoxing municipal government in eastern Zhejiang province, the local office of developer Sunac China appealed for “policy assistance” as it was struggling through what it called a “turning point in China’s real estate industry.”

“We have never experienced such a radical change in the external environment,” Sunac’s Shaoxing office said, pointing to a 60% year-on-year fall in home sales over the summer.

“The market is almost frozen,” it added in the letter, which was first reported by the Financial Times. “The radical change in policy and environment has seriously disrupted our business and made it very difficult to maintain normal operations.”

The sudden, sharp collapse in China’s property market is shown in the charts below which reveal that the amount of actual land transactions was not only well below the land supply in recent weeks, an unprecedented divergence, but that volumes were 65% below year-ago levels as potential buyers are suddenly terrified of investing in real estate as the Evergrande fate remains in limbo, with some worried that some of the 65 million empty apartments could hit the market and lead to a crash in property values. 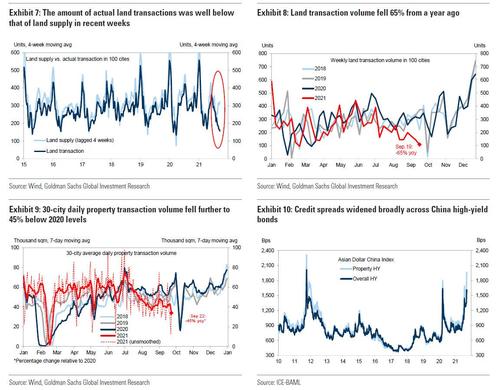 While the plunge in transactions is demand-induced, there are also concerns that an Evergrande insolvency and eventual collapse could lead to a supply crunch. As reported earlier, in July a Chinese city halted sales at two Evergrande projects alleging the troubled developer misappropriated funds by only depositing a portion of the proceeds from housing sales into the escrow accounts, according to a local government statement.  To ensure Evergrande doesn’t divert these funds, the housing bureau in Nansha district created an escrow account under its own name this month to take in proceeds from Evergrande homebuyers, cutting off the developer’s direct access to the money.

A lack of funds has already led to a construction halt on some unfinished housing properties, sparking social unrest among buyers. In Guangzhou, buyers surrounded a local housing bureau earlier this month to demand Evergrande restart construction.

As we discussed over the weekend, one of the most troubling downstream consequences from chaos in the property sector would be social unrest, and as we noted, maintaining social order has always been a key priority for the Communist Party, which has no tolerance for protests of any kind.

In Guangzhou, homebuyers surrounded a local housing bureau last week to demand Evergrande restart stalled construction. Disgruntled retail investors have gathered at the companys Shenzhen headquarters for at least three straight days this week, and videos of protests against the developer in other parts of China have been shared widely online.

Without a social safety net and with limited places to put their money, Chinese savers have for years been encouraged to buy homes whose prices were only ever supposed to go up (similar to the US before 2007 when even idiots like Ben Bernanke said that the US housing market never goes down). Today, buying a house (or two) is a cultural touchstone. And while housing affordability has become a hot topic in the West, many Chinese are more likely to protest falling home prices than spiking ones.

Which brings us to a must read report from Goldman’s Kinger Lau published overnight and focusing entirely on China’s property sector – instead of just Evergrande – where it addresses a glaring dilemma: Beijing’s desire to regulate and deleverage the housing sector even as it keeps property prices rising, a dynamic we summarized concisely earlier this week inside a tweet:

China wants both, will have to pick one

In his must read report (available for professional subscribers in the usual place) Goldman’s Lau explains that what is going on with Evergrande, and in fact the turmoil gripping China’s broader property sector is largely self-inflicted as “regulatory actions in China Internet have resulted in more than US$1tn market cap loss on the tech sector since mid-Feb, but in the past two weeks, investor focus has shifted to the US$60tn China property market which is linked to ~20% of Chinese GDP and represents 62% of household wealth.”

Specifically, Goldman notes that more than 400 new property regulations (shown in the appendix) that are largely tightening in nature have been announced ytd to restrain housing market activity, spanning supply, demand, funding, leverage, to price control measures. It is these measures that have contributed to a 14% year-on-year fall in property sales and $90 billion of market-cap losses among developer stocks in 3Q alone.

In his attempt to summarize the critical linkages between China’s all-important property sector and the broader economy (something we first tried to do back in 2017 in “Why The Fate Of The World Economy Is In The Hands Of China’s Housing Bubble“), Goldman first focuses on the immediate catalyst behind the current crisis, which according to the bank has to do with the unprecedented regulatory tightening “in the largest asset class globally.”

Or, as Goldman puts it succinctly, “Property is everywhere in China“ 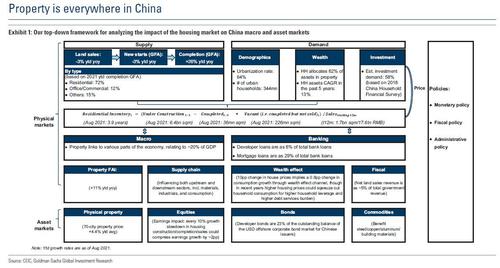 Some explanatory notes on the chart above: 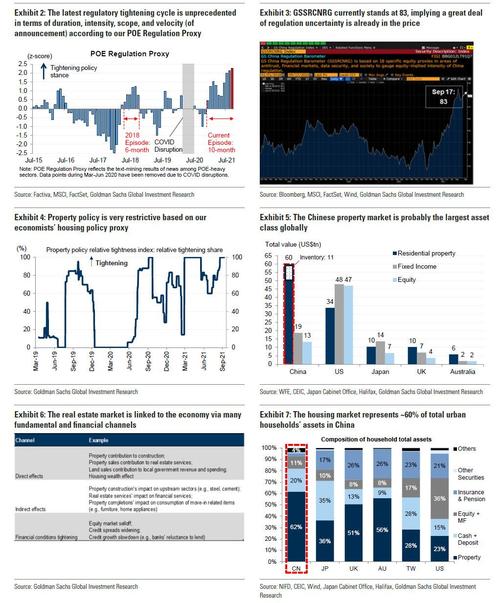 While a full-blown property crisis would impact virtually every aspect of the Chinese economy, starting with capital markets, shadow banks, and social stability, the most immediate one for global investors is of course, the equity market. Here are Goldman’s key observations on this topic:

The regulation headwinds have resulted in a noticeable slowdown in property activities in recent months: nationwide property sales have fallen 14% yoy in3Q21 alongside stable prices in the primary market but large declines of transactions in the secondary market; property FAI and new starts have fallend rastically, although completion growth momentum has remained strong largely on favorable base effects. 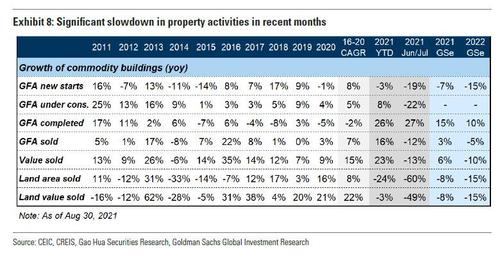 At the macro level, Goldman economists have laid out 3 scenarios to model the contagion impacts from reduced property impulse on macro growth. Overall, they see 2022 GDP growth hit ranging from 1.4% to 4.1% depending on the magnitude/severity of the property market slowdown and the tightening of financial conditions domestically, although their scenario analysis does not take into consideration potential monetary and fiscal policy easing in response to the property market declines. 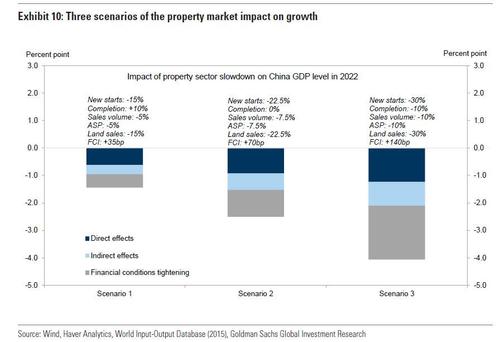 While listed developers only account for 4% of earnings in the aggregate listed universe, the housing market could be linked, directly and indirectly, to ~15% of corporate earnings, and every 10pp growth deceleration in housing activity could reduce profit growth of the housing market by ~2pp, all else equal.

A snapshot of the various top-down impact of the Chinese property cycle on corporate earnings is shown below: 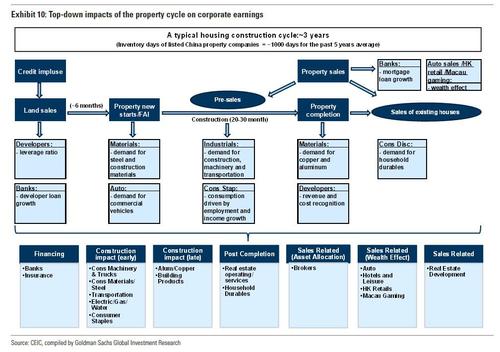 In sum, mapping Goldman’ base case assumptions on GDP growth and property activities for 2022 onto corporate earnings via these channels,the bank lowers its 2022E EPS growth for MSCI China from 13% to 7%, but as the bank warns “the earnings downside (delta) could be much more significant (-28pp) if their bear cases prevail.” 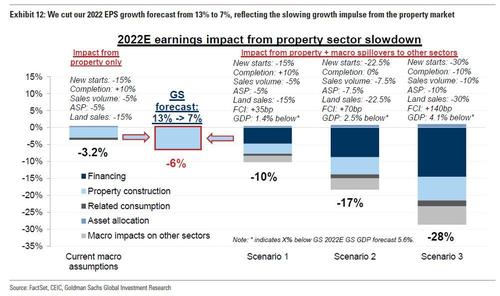 And should more companies warn that “the market is almost frozen” as a result of the Evergrande crisis, the bear case is virtually assured.

We conclude with Goldman’s observations on the contagion risks which according to the bank – and contrary to the market – “are building”, even if systemic risks can still be avoided.

While the restrictive policies have cooled the market, it has put highly-geared developers, notably Evergrande, in the spotlight as their deleveraging path becomes increasingly challenging. On one hand, Goldman agrees with us, and says that on a standalone basis, Evergrande should not be a serious systemic threat given that its total liability of Rmb1.9tn accounts for 0.6% of China’s outstanding TSF, its bank loans of Rmb572bn represent 0.3% of systemwide loan book, and its market share in nationwide commodity housing sales stood at 4% by 1H21. However, the real risks emerges in the context of the slowing property market: indeed, as in other systemic/crisis episodes, investors are concerned about specific weak links which could spread to the broader system via fundamental and financial channels in the case of disorderly default, and therefore the financial condition tightening risk could be much more significant than the Rmb1.9tn liability would suggest, according to Goldman.

How much risk is priced in? This is a popular question from investors but also a difficult one to answer given the fluidity of the situation. However, the following analyses lead Goldman to believe that the market may have priced in some degrees of degradation in macro/corporate fundamentals and possibly policy response from the authorities (i.e. a “muddle-through” scenario), but not a harsh scenario that is systemic and global in nature 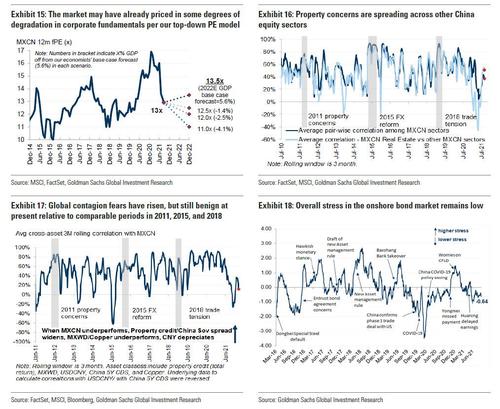 In light of all this, the good news is that in Goldman’s view systemic risks could still be avoided considering:

Ultimately, timing will be key to a happy ending: Given the outsized market value of China property, and its intricate linkages to the real economy and the financial markets, deleveraging the property market and improving financial stability – two contradictory concepts – could raise systemic concern if policy actions are pursued too aggressively, or without clear coordination among regulators and communication with the market.

Importantly, as market concerns over tail risk and spillovers start to build, there is increasing focus on the narrowing window for policymakers to provide the necessary circuit breakers to ring-fence the (collateral) damages and stop the downward spirals.

A key risk from continued delayed action would be a bigger snowball effect and more damage on markets and investor (already strained) confidence in Chinese assets. As such, Goldman expects the market to focus on potential actions that could be pursued, such as a combination of debt restructuring (bank loans, WMP, credits), conditional government involvement in working capital bridges and unfinished property projects, and a coordinated plan to divest and cash in assets.

Finally, as promised earlier, here is a summary of the key loosing (green) and tightening (red) policies in China’s property market. 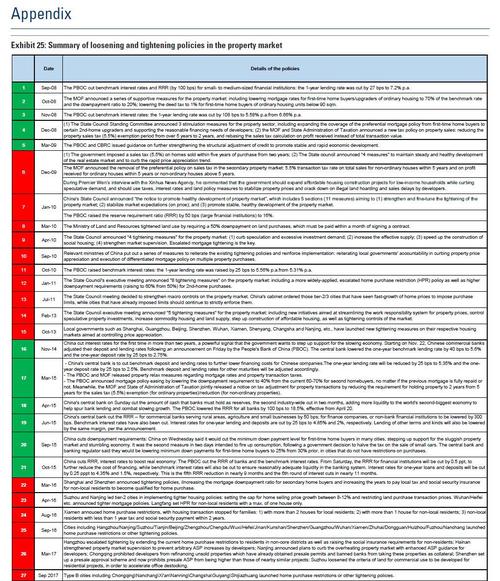 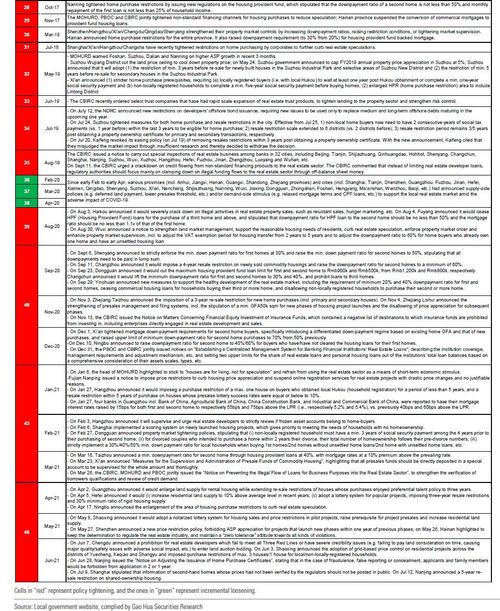