Amid regional concerns of China’s growing power in the Indo-Pacific, President Biden will host leaders of the Quad alliance at the White House on Friday, where they are expected to discuss the fight against infrastructure and technological cooperation, and the fight against Covid-19. Looming heavy in the background is the US-Australia-UK ‘Aukus’ deal unveiled over a week ago which has been loudly condemned by Beijing.

A senior administration official previewed Friday’s summit by saying, “At the outset of the admin the president indicated he wanted to take this institution that’s an informal gathering of leading democracies in the Indo-Pacific and basically lift it both to the leader level, and ensure we are working together to build better lines of communication and strengthening cooperation and habits of cooperation amongst us,” according to Reuters.

The official also said the Quad is part of the “larger fabric of engagement” that reflects White House priorities in the Indo-Pacific region, which has especially been focused on shoring up resistance to China’s influence among allies…

Heading into the first in-person leaders meeting, the survival of the current iteration of the grouping across two US administrations and changes in governments in Japan and Australia “speaks to [the Quad’s] durability and how, you could say, the quad is here to stay,” Sameer Lalwani, a senior fellow for Asia strategy at the Stimson Center, told Al Jazeera.

Importantly, The Hill highlights the US need to protect and ensure its semiconductor supply amid the global shortage:

Beyond vaccine production, the group will announce a supply chain initiative focused on semiconductors amid a global shortage of the key part for cars and other products. They will also detail a 5G diversification effort, as well as a fellowship sponsored by private donors that will send 100 masters or doctoral students — 25 from each country — to leading U.S. universities to study science and technology programs.

Interestingly just ahead of the Friday summit, the White House further sought to clarify the “unofficial” nature of the gathering and that the Quad is not in any way a military alliance. 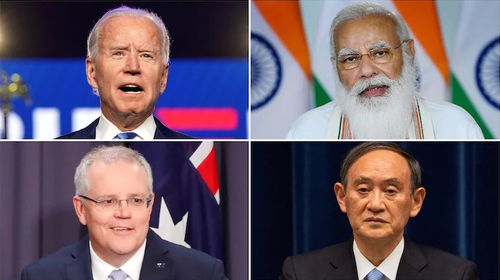 “I do want to underscore that The Quad is an unofficial gathering,” an administration official was cited in CNN as cautioning.

“Although we have a number of working groups and we are deepening cooperation on a very daily basis, it’s also the case that it is not a regional security organization,” the official sought to clarify.