Update (1015ET): US futures are giving back their kneejerk gains as the penny starts to drop that this is not the euphoric ‘all clear’ after all.

As we detailed below – and traders are starting to realize –  Beijing may have just found a brilliant solution to the Evergrande problem, effectively rescuing the company and averting a systemic crisis all at the same time:

And that is not what the market wants to hear… 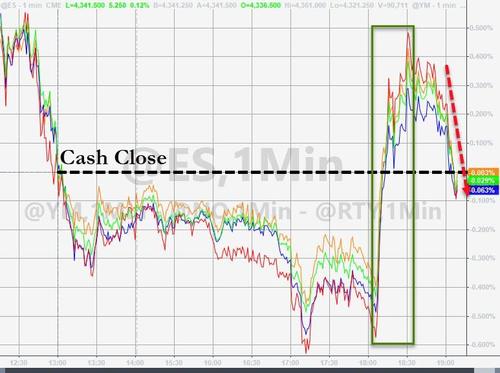 Chinese stocks are fading back too (after reopening from the holiday)… 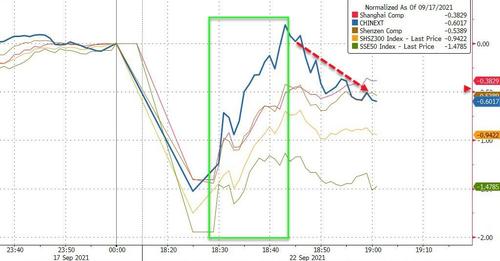 The question is – will Beijing use this as a strawman to judge the impact of such a restructuring strategy? And what will be the impact on the foreign dollar bond market after this?

We suspect Larry Fink wishes he had listened to George Soros now. 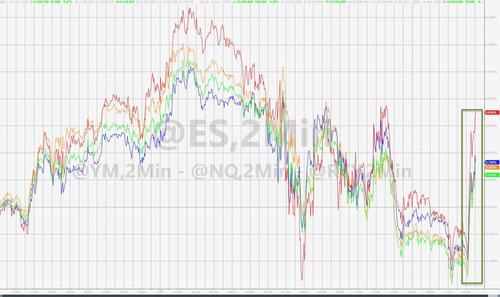 And bitcoin spiked too… 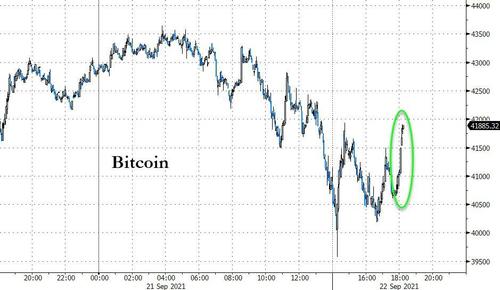 But the buy first, think later mantra may be in full play here as shortly after the first flashing red headline, Bloomberg reported that the September 23rd yuan coupon payment on local, yuan-bonds had been negotiated with bondholders (without clarifying the terms of the arrangement) but it was unclear what the fate of the upcoming Offshore bond coupon payment is.

Morgan Stanley had previously suggested this plan of action, forecasting that Beijing may initiate a managed debt restructuring of “a troubled property developer” in the coming week, followed by policy easing in October to contain spillover to the broader economy.

The world’s most indebted developer is supposed to pay bond interest totaling about $119.5 million on Thursday. Interest comes due Thursday on two Evergrande notes, even as it falls behind on payments to banks, suppliers and holders of onshore investment products:

In other words, Evergrande’s onshore property unit, Hengda Real Estate, will make interest payment for its 5.8% 2025 bond Thursday, according to exchange filing, while the 8.25% offshore, dollar-denominated bond remains in limbo. 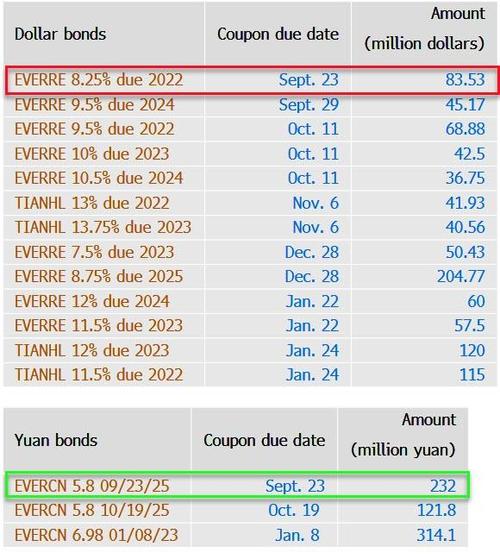 Or shown via the company’s org chart, the TIANHL coupon payment is being made by the onshore unit Hengda Real Estate, so as to preserve the Keepwell agreement, while the EVERRE bonds, issued by China Evergrande Offshore, remain in limbo. 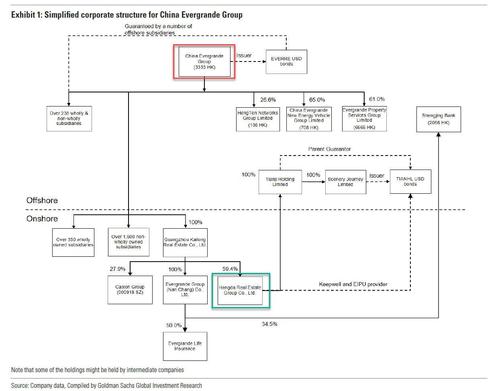 So, to repeat, Evergrande has managed to negotiate the coupon payment of the onshore note – though we do not know what kind of haircut was applied if any – but more improtantly, we do not know about the coupon on the dollar bond. Also remember this comes after the firm missed interest payments due Monday to at least two of its largest bank creditors. 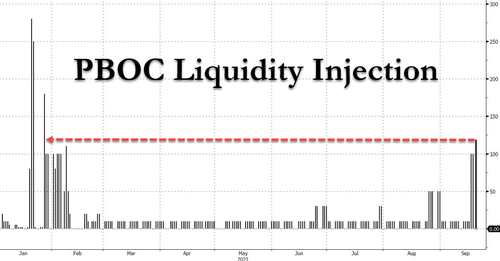 “This will soothe the tightness and keep liquidity loose. Next week will see big fiscal spending flows, which will solve the quarter-end liquidity issue.”

So the question is did Xi just convince Evergrande and its domestic creditors to work out a solution, in effect restructuring the company’s domestic bonds, and will the Evergrande plan leave foreign/dollar bondholders (and bank debtholders) in the hole while the domestic bonds are made whole?

More importantly, Beijing may have just found a brilliant solution to the Evergrande problem, effectively rescuing the company and averting a systemic crisis all at the same time: it will pay local bondholders and soft nationalize/bailout Evergrande, but will avoid allegations of backsliding on tightening/deleveraging promises and and “common prosperity” by stuffing foreign creditors.

For those confused, here is an explainer we published previously using data from Goldman on the difference between the offshore (EVERRE) and onshore (TIANHL) bonds:

Assessing holding company level indebtedness. The $14.0bn of EVERRE offshore bonds are issued by the parent company, with a number of offshore subsidiaries acting as guarantors (see org chart above). Therefore, to assess the potential recovery, one needs to assess the amount of indebtedness at the parent company level and the value of the parent companys investments. Alas, as Goldman notes, that cannot be accurately ascertained, as Evergrande provides financial results on a consolidated basis, with the most recent financial results from June 2021. However, we are able to obtain financial results from a number of their consolidated subsidiary companies, including Hengda Real Estate (the 59.4% owned onshore property development company, which is also their main operating entity) and two of their listed consolidated subsidiaries (China Evergrande New Energy Vehicle and Evergrande Property Services Group). This allows us to map out the distribution of Evergrandes total debt, which totaled RMB 571.8bn ($88.6bn) at the end of June 2021.

Assuming potential $21.5bn of debt at the holdco level. Exhibit 2 provides an estimated breakdown of Evergrandes total debt. In additional to the $14.0bn of EVERRE bonds, there is an RMB 8.2bn ($1.3bn) onshore bond issued by Hengda Real Estate (EVERCN 6.98% 8 Jul 2022) that has a repurchase agreement by the parent company. The rest of the indebtedness can be attributed to the various subsidiary companies, with the exception for an amount totaling $6.2bn of debts, which we term Other debts. If we conservatively assume that the $6.2bn of other debts and the RMB 8.2bn onshore bond are both parent company level debts, we arrive at a potential total amount of indebtedness at the parent company level at $21.5bn. Note that we do not assume any of the Hengda bank and trust loans have guarantees by the parent company. Based on Hengda Real Estates latest financial report, it does not state any of their indebtedness as guaranteed by the parent company.

Lots of unknowns, therefore caution is warranted. Given the complexity of Evergrande Group, and the lack of sufficient information on the companys assets and liabilities, it is difficult to ascertain a more precise picture of the recovery prospects. On the positive side, there are other assets that could provide additional value, and the chart below provides a basic breakdown of the assets of China Evergrande Group and their major consolidated subsidiaries. On the negative side, there is the all too realistic possibility of additional liabilities we have not incorporated, such as off balance sheet items. For example, on a fully consolidated basis, the company has provided financial guarantees (excluding mortgage facilities) totaling RMB 29.5 at the end of 2020, of which RMB 23.7 were provided by Hengda Real Estate. This suggests there could potentially be guarantees provided at the parent company level. All in all, given the uncertainties, much caution is warranted.

TIANHL bond recovery depends on Hendga Real Estate operations... One aspect of the recovery prospects for the $5.2bn of TIANHL bonds outstanding is the strength of the operations of Hengda Real Estate. In terms of book leverage (i.e., total debt divided by total debt plus book equity), Hengda Real Estate was at 56.0% at the end of June 2021, which is near the median level for China Property HY issuers. That said, the balance sheet is likely far more levered than indicated by the book leverage. The chart below lays out the balance sheet for Hengda Real Estate at the end of June 2021, and it indicates the company having RMB 755.9bn of trade payables and other current liabilities, rising from RMB 651.7bn at the end of December 2020. That tightness in onshore liquidity and in the credit markets meant that the company may have had to extend payment terms to their suppliers. Therefore, if one incorporates part of the payables as debt, the book leverage would increase substantially. For example, if 100% of the trade payables and other current liabilities are incorporated as debt, the book leverage would increase to 77.8%, and if 50% are included then it would rise to 70.5%.

…as well as the strength of the keepwell agreement. In addition to the uncertainties surrounding the leverage at Hengda Real Estate, there are uncertainties regarding the structure of the TIANHL bonds. As shown in the org chart above, the TIANHL bonds are issued by an offshore special purpose vehicle (SPV), with credit support from a keepwell agreement and equity interest purchase undertaking (EIPU) from Hengda Real Estate. Yes, when analysts figure out that they’ve put their money into yet another Chinese SPV, their heads will spin come Monday when they actually start reading this stuff. The strength of the keepwell and EIPU structure is unclear, and in our previous report, we assumed recovery prospects for keepwell structure bonds to be 50% below that for senior unsecured debt of the same entity.

Much will depend on the debt structure for Hengda. At the end of June 2021, Hengda Real Estate had RMB 405.5bn ($62.8bn) of debt outstanding, of which RMB 270.8bn ($42.0bn), or 66.8% of the debts, are secured borrowings (Exhibit 6). Another RMB 39.3bn of debts are guaranteed debt, which are debts that have guarantees provided by Hengda Real Estate, its subsidiary companies, or third parties, according to their latest financial results. The remainder consists of unsecured borrowings (RMB 10.9bn), onshore bonds (RMB 50.9bn) and offshore bonds (RMB 33.6bn). The company has also provided guarantees, possibly to non-consolidated subsidiary companies and to suppliers, which was RMB 31.8bn at the end of Jun 2021