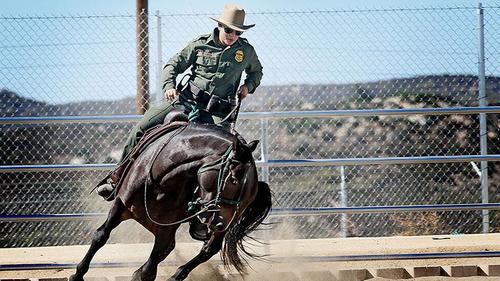 The claim was made after footage emerged of agents on horseback confronting migrants on the Southern border.

Far-left corporate media outlets such as VICE ran headlines like “US Border Agents Are Removing Haitian Migrants Using Horses and Whips,” and the claims were repeated on Twitter:

From @elpasotimes: As the Haitians tried to climb onto the U.S. side of the river Sunday afternoon, a border agent shouted: “Let’s go! Get out now! Back to Mexico!”

The agent swung his whip menacingly, charging his horse toward the men in the river.https://t.co/DejaoSQKwI

Border Patrol agents on horseback cracking whips and charging into crowds of Haitian asylum seekers in Texas, shouting at them to go back to Mexico — strong reporting from @psskow on the situation in Del Rio/Ciudad Acuña https://t.co/ZVeS6j3gnM

This is inhuman and utterly unacceptable.
I am calling for an immediate investigation into these videos and photos from Del Rio showing U.S. @CBP‘s treatment of Haitian migrants along the border.

Eventually, ‘Squad’ members AOC and Omar got in on the act:

These are human rights abuses, plain and simple.

Cruel, inhumane, and a violation of domestic and international law. This needs a course correction and the issuance of a clear directive on how to humanely process asylums seekers at our border. https://t.co/tdDN70Hz1z

It doesn’t matter if a Democrat or Republican is President, our immigration system is designed for cruelty towards and dehumanization of immigrants.

Immigration should not be a crime, and its criminalization is a relatively recent invention. This is a stain on our country. https://t.co/PZKYN4WLyj

And then, the White House chimed in, with serial question non-answerer Jen Psaki replying to frothing ‘reporters’, “I don’t think anyone seeing that footage would think it was acceptable or appropriate,” but admitting “I don’t have the full context. I can’t imagine what context would make that appropriate.”

How about the context of a full on invasion fuelled by your own administration?

Many, including the Border Patrol themselves, pointed out that the straps seen in the footage are not ‘whips’, they are horse reigns and there is no evidence that they were being used on migrants whatsoever. They are used to steer and control horses:

From a Border Patrol source: “Agents use their reins for a lot of reasons. Primarily it’s used to steer the horse, but agents will also spin them sometimes to deter people from getting too close to the horse…We are not aware of anyone being struck with the reins.” https://t.co/yxxyoAuklh pic.twitter.com/t3o3h9dJbL

Agent adds: “BP does an excellent job when it comes to use of force training. There is no way a horse patrol unit would be whipping aliens. Whips are not issued or authorized for use.”

The latest fake controversy comes as Border Patrol is attempting to deal with record numbers of migrants at the border in scenes resembling a third world country:

NEW: We are back underneath the international bridge in Del Rio, TX, this morning, where up to 12,000 migrants are still camped out after crossing into the US illegally. Conditions here are similar to a third world refugee camp. @TxDPS has secured area while BP works. @FoxNews pic.twitter.com/HKFPYuZZMp

Brand new merch now available! Get it at https://www.pjwshop.com/

In the age of mass Silicon Valley censorship It is crucial that we stay in touch. We need you to sign up for our free newsletter here. Support our sponsor – Turbo Force – a supercharged boost of clean energy without the comedown. Also, we urgently need your financial support here.