While Beijing is busy dismantling its crony capitalism socialism with Chinese characteristics socio-economic system, as it unveils new crackdowns, rules and quasi nationalizations against its most successful private (but not for long) industries every day, China is also putting the communist propaganda into overdrive and is set to educate its youth on the version of “Marxist belief” espoused by its president by infusing “Xi Jinping Thought” into the national curriculum, its ministry of education announced last week. 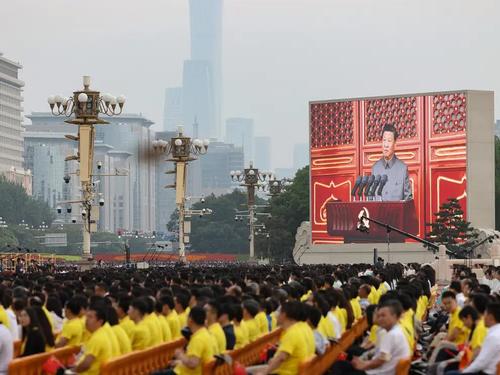 Already enshrined in China’s Constitution in 2018, “Xi Jinping Thought on Socialism with Chinese Characteristics in the New Era” will be taught to thousands of students starting from primary school level up into university, the Independent reports.

Aimed at indoctrinating Marxist beliefs at a young age as well as loyalty to the ruling Chinese Communist Party, the introduction of “Xi Jinping Thought” in textbooks – similar to what the USSR did – will help strengthen the “resolve to listen to and follow the party”, the state-run Global Times reported, citing an official statement.

It will also help teenagers gain confidence in the “path, theory, system and culture of socialism with Chinese characteristics”, it said. And with China announcing overnight it would limit children to playing online games for just 3 hours a week, think of just how much more effective China’s communist propaganda will be now in brainwashing its youth.

The national curriculum will be revised to accommodate the 14-point ideological text and will span basic, vocational and higher education in school. It will also be integrated into various subjects, the report said, quoting a member of the National Textbook Committee.

At the earliest stage, primary schools will be tasked with helping children cultivate a love for their country, the Communist Party and socialism, the report said. In middle schools, the focus will be on a combination of perceptual experience and knowledge study which will help students shape basic political judgments and opinions, all wrapped by the overarching intellectual prerogatives of communism, or at least “communism” where a handful of party oligarchs are worth billions and everyone else is an aspiring debt slave. Then at the college level, students will learn about theoretical thinking – by this we can only assume students will “learn” how to reverse engineer western scientific achievements.

The 14-point “Xi Jinping Thought” says that the Chinese Communist Party leadership should be ensured over “all forms of work in China”, the party should take a people-centric approach for the public interest, it should govern China with the rule of law and practise socialist core values like Marxism and communism among others.

It also says that the Xi Jinping-led party should have “absolute leadership” over the armed forces, and espouses an unerring belief in the One China principle what it comes to the country’s borders.

The above represents the latest move to cement the Communist Party’s position generally and Xi’s in particular. Which is fitting for a country which three years quietly became a dictatorship: The 68-year-old Xi abolished presidential term limits in 2018, extending his rule indefinitely.