Of the largest permanent changes to occur as a result of the Covid pandemic, none may be more favored by workers than a marked increase in working from home, or a “hybrid’ workplace.

Calling it “a radical transformation of professional life,” a new Bloomberg article speculates that the change in work-style could wind up “jump starting” economic activity and innovation.

Both industries and local economies are undergoing shifts to adapt to the change. While sales at the local coffee shop sandwiched between office buildings may have dropped, spending on household activities and leisure are up, the report notes.

And productivity is also up: working from home boosts productivity by about 4.8% the report says. That’s mainly as a result of replacing travel time. 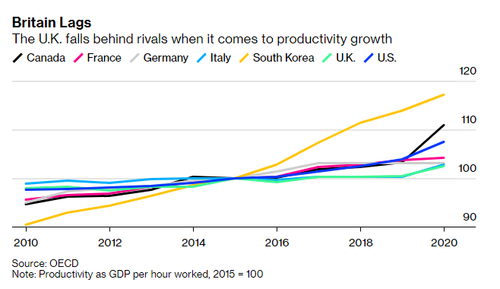 Steven J. Davis of the University of Chicago told Bloomberg that the positive effects of working from home “will be there indefinitely”.

Even Fed chair Jerome Powell commented on the shift this month, stating: “I think we know that we’re not simply going back to the economy we had before the pandemic, but it will take time to see exactly what the changes will be. It seems a near-certainty that there will be substantially more remote work going forward. So that’s going to change the nature of work, and the way work gets done.”

A 2013 study by Stanford also showed that working from home could boost productivity up to 13%.

Countries that are lagging in productivity, like the UK, “will be paying close attention”, the report says.

Former U.K. government advisor Giles Wilkes commented: “The ability to deliver products in different places, make more efficient uses of property, and so forth, that is productivity driving innovation.” 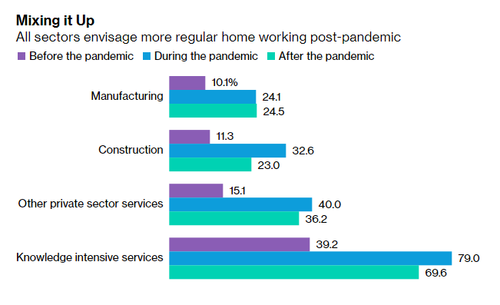 He continued: “Hybrid working represents a change in the patterns of both demand and supply in a way that moves the economy forward.”

International designer Yuri Suzuki, who formerly commuted 70 minutes each way in London, told Bloomberg: “After I came back home, I felt just exhausted — I couldn’t really think or create anything.”

Recall, weeks ago, we wrote that 65% of Americans would take a 5% pay cut to be able to work from home. In addition to just taking a pay cut, many respondents to a new survey said they would also “give up days off or put in more hours” in order to be able to keep working from home. 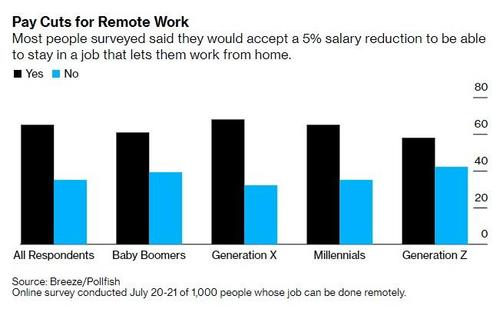 And amidst a historic labor shortage brought about by the Federal government subsidizing the entire country to sit around and literally lock down, companies are being forced to pull out the incentives to try and get workers to return to the office. Some companies are handing out prizes or even providing things like free lunch, child care, or yoga classes. 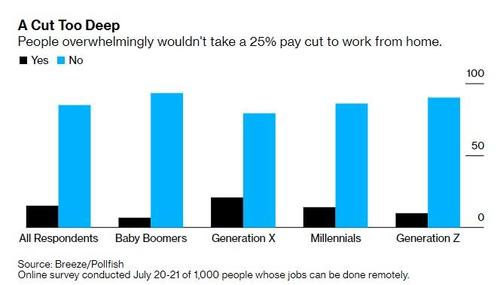