For much of the past three months, ever since the record highs earlier this year which saw bitcoin hit an all time high of $64,000 and ethereum rise as high as $4,200, bitcoin and ethereum had generally traded joined at the hip with a correlation approaching 1. However, for the past two hours there has been a notable divergence between the two largest cryptocurrencies. 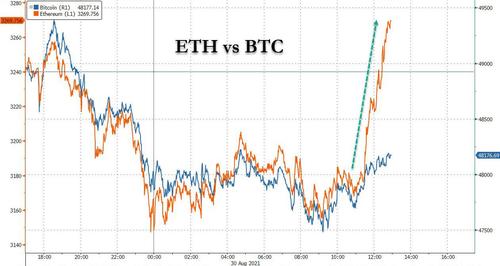 While there has been no clear catalyst for the move, it is possible that some traders are looking into what we noted last week, namely that the ETH’s 1-month forward premium to spot is now even higher than it was during the May all time highs, a signal that futures traders have never been more confident ether will trade higher in one month compared to today.

ETH/BTC’s 1M fwd premium to spot is now even higher than during the May all time highs. pic.twitter.com/EIYqS84UhA 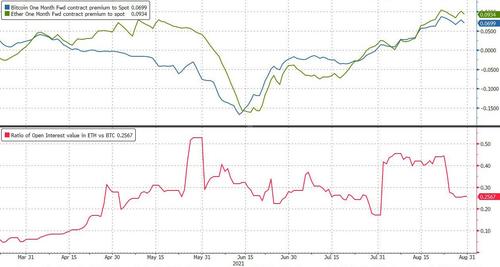 …. while the ratio of Open Interest in ETH to BTC continues to favor the second largest cryptocurrency amid what growing institutional interest and adoption of ETH over BTC.

There is another possible reason behind today’s spike in ethereum while is taking place as bitcoin remains largely dormant: traders are once again starting to pay attention to the renewed frenzy taking place in the NFT space.

Months after peaking in March, when NFTs first emerged on the stage with a bang only to see interest fizzle in the ethereum-based token, the NFT craze is back with a bang, and as the Block crypto writes, “July saw just over $300 million in trade volume across the non-fungible token space’s marketplaces. The vast majority of that took place on OpenSea, the a16z-backed market that announced a $100 million funding round that same month.”

While that monthly figure wasn’t the all-time high — March drew about $315 million led by Nifty Gateway — the July figure was part of a collection of data points that signaled a resurgence in NFT activity, particularly around collectibles, artworks — “jpegs” in the crypto trade parlance.

So fast forward to August and… well, hold on to your hats. 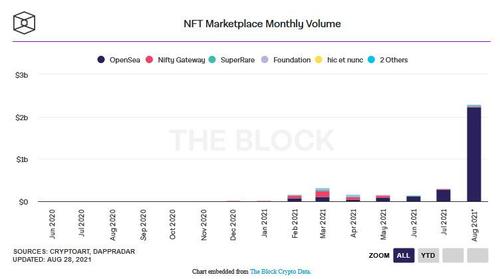 Yes, you read that chart right: August’s NFT market volume currently weighs in at $2.3 billion, with OpenSea contributing $2.23 billion to that figure in what the Block writes is a “definitive signal that OpenSea is now the dominant market for NFTs.”

Of course, OpenSea’s rapid success has come with problems. Just this morning, the market’s website went down, triggering a round of complaints on social media — a side effect, no doubt, of the fact that NFTs are this summer’s prevailing crypto narrative and, well, all eyes are on this particular corner of the ecosystem. – The Block Crypto

It’s not just OpenSea – other markets have also seen a sruge in volumes: SuperRare saw just over $23 million in August, up from about $6 million last month; Nifty Gateway rose from $7 million to $27.3 million from July to August.

As the next chart below shows, weekly data collected by The Block Research indicates that the bulk of the activity — particularly in recent days — is coming from the trade of NFT art and collectibles — think CryptoPunks, Art Blocks, etc. 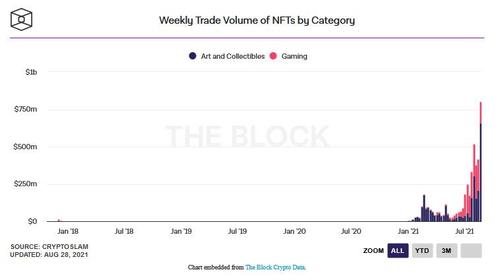 In summary, NFT “interest is high right now” staging a remarkable comeback from what many said was a market left for dead, “and that’s paying dividends for marketplaces catering to NFT trade activity — and, no doubt, those operating platforms like OpeanSea” where one can buy CryptoPunk #7252 for 1,600 ETH or  $5.5 million… 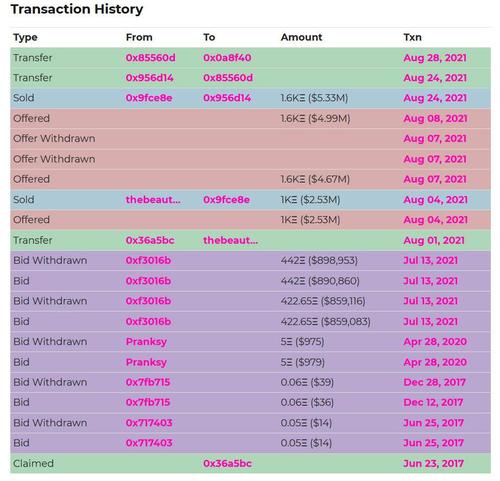 … and prompting observations such as this one:

The Block trails off, musing rhetorically, “speculation as to whether this is the peak or a harbinger to come” but whatever the answer, ethereum appears to be benefiting as most NFTs are part of the ethereum blockchain, and the more such “network effects” lead to trading volumes and wider adoption, the better it will be for ethereum which, as we noted last week, saw an abnormal surge in call volumes…

…. sparking speculation if it was set to soar to new all time highs.