Evacuations orders have been extended to the entire South Lake Tahoe as the massive Caldor Fire quickly spread through the region, according to the California Department of Forestry and Fire Protection, otherwise known as CAL Fire.

The map below shows the South Lake Tahoe evacuation area in blue and extends to Lake Tahoe’s edge, and even reaches the Nevada state line. 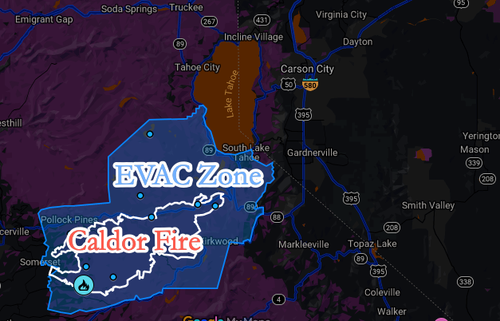 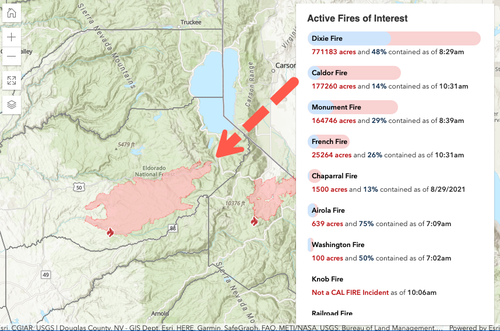 By the hour, evacuation orders have been issued. Today’s new orders for residents to immediately flee their homes or risk burning in an inferno are Tahoe Keys, Tahoe Island, Al Tahoe, Sierra Tract, Bijou, Tahoma, Fallen Leaf, Pioneer, Gardner Mountain, and Trimmer. What this means is that all of South Lake Tahoe is under emergency evacuation orders.

The National Weather Service in Sacramento has extended Red Flag Warnings for the area through Sept 1. The warning indicates weather conditions, such as hot, dry, and winds, could accelerate the spread of the wildfire. 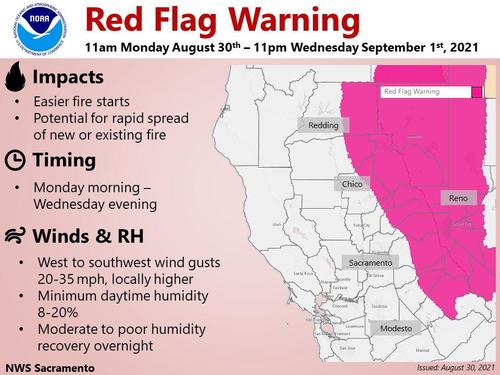 Since we last reported on Caldor Fire (last Friday), the blaze’s size has grown 29%, from 139,000 acres to 177,000. We noted at the time that weather conditions were just perfect, low humidity and increasing temperatures, for the fire to spread.

On Monday, at least 3,500 firefighters are battling the blaze that has destroyed over 650 structures since sparking on Aug 14. Due to heavy smoke, deteriorating air quality impacts human health and makes the air barely breathable in or around Lake Tahoe.

An air quality alert continues for all eight counties of the San Joaquin Valley due to smoke impacts from ongoing wildfires occurring throughout California. For full details and how to protect yourself from wildfire smoke, check: https://t.co/g4iJnZgUrE. #airqualityalert pic.twitter.com/otoHLDlxr6

On the ground, the devastation is absolutely shocking:

A massive traffic jam of cars trying to escape the fire.

Thank you @Van_Tieu for all the live looks of traffic on US-50 in S. Lake Tahoe #caldorefire pic.twitter.com/rBOH8UZql7

The #Caldorfire made a hard push into the edges of the Lake Tahoe basin overnight.

The #Caldorfire made a hard push into the edges of the Lake Tahoe basin overnight.

absolute monster of a pyrocumulus cloud created by the #caldorefire from this article on the situation in #SouthLakeTahoe https://t.co/nqwLoKFCXl pic.twitter.com/q2mWPQhbsK

Praying for South Lake Tahoe as the #caldorefire gets dangerously close. My Uncle and Cousin are out safe for now. Praying for their town, their home and the first responders 💔 This is where my uncle works during the winter😭 pic.twitter.com/DEXWqPHC4z

From a plane, the fire appears massive. 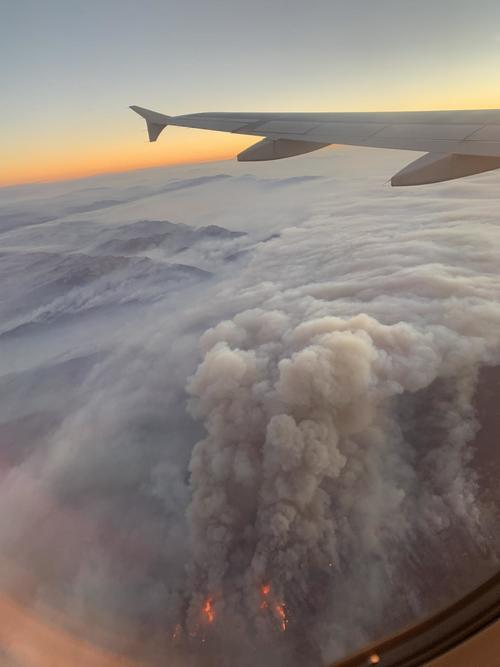 Reuters provides a recap on the fire.

The largest fire burning in the state is Dixie Fire, which has scorched 771,000 acres and is 48% contained. Across the US, 85 large fires and complexes have burned 2.5 million acres.