Authored by Charles Lipson via RealClearPolitics.com,

It’s easy to find politicians saying dumb things. Television news gives them plenty of coverage. Viewers like colorful voices, which are often the most extreme.

The resulting Kardashianization of politics doesn’t matter much unless these caricatures tarnish an entire political party, define its public perception, and compromise its chances of passing legislation and winning elections. 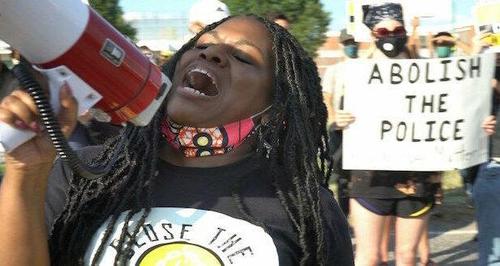 That’s the Democrats’ problem with “the Squad,” led by Rep. Alexandria Ocasio-Cortez.

This problem arose again last week when squad member Cori Bush told a national TV audience how eager she is to defund the police. She said nothing to convince anyone who rejects her views. She probably made matters worse with her transparent hypocrisy, defending her right to hire expensive private security guards while advocating less police protection for everyone else.

Rep. Bush hasn’t learned the single most important lesson about being stuck in a hole: Stop digging. The St. Louis Democrat doesn’t dig with shovels, either. She bought an industrial-size excavator and went to work. The hole she’s digging is “defund the police,” and polls show she’s mining for fool’s gold. The defund movement may be popular with some wealthy (white) elites, activists on the extreme left and, at least temporarily, some African Americans in congressional districts like Bush’s, though its popularity even in those precincts will fade as violence continues to rise. Everyone else is already staunchly opposed. They fear, quite reasonably, that defunding will lead to more crime, not only because there will be fewer cops on the beat but because those who remain will limit their active policing because they lack political support.

A new poll, just completed by Harvard’s Center for American Political Studies and Harris Poll, shows that 75% of respondents want more police and only 25% want less. About the same number, 72%, oppose defunding the police. A slight majority even favors restoring “stop and frisk” policies to “deter gun crime,” something New York did under Mayors Giuliani and Bloomberg before ending the practice because so many young minority men were being searched.

Pollster Mark Penn, co-leader of the Harvard/Harris survey, now says rising violence is the single most important issue for the 2022 midterms. “Crime is becoming the next crisis in America,” he concluded, “with overwhelming numbers seeing an increase in crime and Americans want stricter, not looser, enforcement of laws.” There’s no question which party has the advantage on that issue. The question for Democrats is: What can they do to recover?

Of course, many voters also want to see police reforms and greater transparency. Both are being put in place across the country. Most of all, Americans want police, prosecutors, and judges to do their respective jobs and protect them from predators. That means the left’s push to slash police funding has become a major electoral liability for mainstream Democrats, both nationally and locally. One sign that the political winds have changed is that two progressive cities, Seattle and Minneapolis, which gutted their police budgets last year, now want to increase them. They are not alone.

Cori Bush spit directly into that wind last week during her CBS interview. Correspondent Vladimir Duthiers asked Bush her response to critics who say it is hypocritical for you to support defunding police departments while she is spending lavishly on her own personal security.

“They would rather I die? You would rather me die? Is that what you want to see? You want to see me die? You know, because that could be the alternative. So either I spent $70,000 on private security over the last few months, and I’m here standing now and able to speak, able to help save 11 million people from being evicted.”

As if that answer wasn’t bad enough, she added,

“I have private security because my body is worth being on this planet right now. … I have too much work to do. There are too many people that need help right now for me to allow that.  So if I end up spending $200,000, if I spend 10, 10, 10 more dollars on it, you know what, I get to be here to do the work. So suck it up and defunding the police has to happen.”

The only way to summarize her response is:

That’s not an appealing message.

There’s nothing wrong with Bush wanting to stay alive. She might want to acknowledge that other people do, too. Since they can’t afford private security, they count on the police to help. She wants to deny them that help.

It is political malpractice for Cori Bush to embrace this kind of narcissism, hypocrisy, and cringing victimization on national TV. It’s even worse when your own party is scrambling to limit the self-inflicted damage done by the movement she advocates. Republicans will be happy to re-air that interview again and again. It’s that bad.

Voters now connect defunding the police with rising crime, and they connect both with the Democrats. Even though party leaders, including Joe Biden, Nancy Pelosi, and Chuck Schumer, have repeatedly tried to distance themselves from progressive demands to cut police budgets, they haven’t succeeded in the public eye, at least not yet.

Why do Democrats have such trouble with the crime issue, despite unwavering support from the mainstream media? The problem is all that darn evidence. All the cities that actually did defund police are governed by Democratic mayors and city councils. All the lax prosecutors, so reluctant to charge violent offenders and brazen shoplifters, are self-proclaimed “Justice Democrats.” Almost all the local judges who release prisoners are Democrats. Almost all the support for “no cash bail” comes from Democrats and has been implemented in blue cities and states. Those policies, supported by leaders like Vice President Kamala Harris, put perps back on the streets only hours after they’ve been charged with violent crimes. It was the Democrats who held a national convention last year and didn’t mention the rioting and looting going on for months. To their credit, party leaders now have to routinely say they oppose defunding police. But no top Democrat — not Biden, not Schumer, not Pelosi — has been brave enough to flatly condemn the progressives who support it and take them on.  The public has noticed. Voters realize that strident demands to cut police budgets, eliminate cash bail, and reduce serious crime to misdemeanors are elements of a larger progressive wish list that would limit all facets of law enforcement and criminal punishment.

Many of those wishes are being granted. In city after city, police know they no longer have the support of top elected officials. They know many of their arrests won’t be prosecuted. The predictable result is that more police are retiring and those who remain are spending more time sitting in squad cars and less time chasing criminals. They know hoodlums can walk into a store, scoop up $950 worth of merchandise, and stroll out to their car with implicit permission from city officials. District attorneys in several major cities, all of them Democrats, consider these thefts only misdemeanors and won’t bother prosecuting. So, police figure, “Why bother trying to catch the robbers?”

The inevitable public revulsion poses a political challenge that goes well beyond one or two Squad members with bad ideas and bully pulpits. True, some have pushed the defunding agenda more aggressively than others, but voters believe the whole party is implicated. Now that moderate members want to change course, those on the left, like Cori Bush, want to keep digging and proudly shouting their message to the world. Their colleagues on the center-left haven’t figured a way to climb out of the hole.

Next November, voters will bury them even deeper if their main concerns are rising crime and lawlessness on the southern border. If that reckoning comes, Democrats will have only themselves to blame.