ECB Preview: The First Meeting After The New Inflation Policy

ECB Preview: The First Meeting After The New Inflation Policy

OVERVIEW: Last week’s unveiling of the ECB’s strategic review has turned what was expected to be an uneventful meeting into one that could shape policy expectations for the coming years. The review has led the ECB to adopt a new symmetrical inflation target around 2%; something which is expected to be reflected in the Bank’s forward guidance on rates. No adjustments to rates or bond purchases are expected for the upcoming meeting. However, should the Bank wish to convey a more dovish pursuit of its new inflation mandate, hints over a beefed up/more flexible APP in 2022 or forward guidance tweaks could be one way to achieve this. Such a move could lean back on the perception that the review is merely a formalization of the approach the Bank was already taking. The bulk of the press conference (in its new format) will focus on the findings of the strategic review whilst outlining policymakers’ perceptions of the Eurozone recovery and impact from the spread of the Delta variant ahead of a more comprehensive assessment in September.

PRIOR MEETING: As expected, the ECB stood pat on rates and maintained the size of the PEPP envelope at EUR 1.85 trln, which will run until at least the end of March 2022. The key takeaway from the policy statement was the continued inclusion of guidance that the Governing Council expects purchases under the PEPP over the next quarter to be conducted at a significantly higher pace than during the first months of this year. At the accompanying press conference, President Lagarde stated that the decision on this front was unanimous. Meanwhile, the ECB’s macro projections saw little changes to growth forecasts, whilst 2021 inflation was revised higher to 1.5% from 1.0% amid transitory factors, and headline HICP is seen cooling to 1.4% by 2023, and therefore short of the ECB’s target. On a more optimistic note, the ECB now classifies medium-term risks as more balanced.

RECENT DATA: Flash inflation for June saw the headline Y/Y CPI rate slip to 1.9% from 2.0% amid a decline in energy prices. However, the outlook for prices is one that is set to be supported by increasing services inflation in the near-term as regional economies reopen. That said, much of this has already been labelled as a transitory phenomenon by the Bank with policymakers more concerned about the medium-term inflation outlook. On the growth front, Q2 flash GDP is not due to be released until the end of the month. Timelier survey data saw the Eurozone composite PMI rise to 59.5 in June from 57.1 amid a mild pickup in manufacturing output and the services sector posting its largest expansion since mid-2007. In-fitting with global trends, IHS Markit noted that firms are increasingly struggling to meet surging demand with labour shortages a contributing factor. Note, the July flash PMIs will be released the morning after the meeting and could reflect increasing concerns over the spread of the Delta variant.

STRATEGY REVIEW: The ECB’s much-awaited strategic review confirmed reports prior to the release by unveiling a shift away from its “close to, but below 2%” medium-term inflation target. Instead, policymakers will now opt for a “symmetric 2% target” whereby “negative and positive deviations of inflation from the target are equally undesirable”. Furthermore, “when the economy is operating close to the lower bound on nominal interest rates, it requires especially forceful or persistent monetary policy action to avoid negative deviations from the inflation target becoming entrenched. This may also imply a transitory period in which inflation is moderately above target”. Drilling down on inflation itself, HICP remains the metric of choice, however, the Bank will “take into account inflation measures that include initial estimates of the cost of owner-occupied housing to supplement its set of broader inflation measures”. ABN AMRO noted that the ECB has previously suggested that the inclusion of OOH into HICP would add 0.2-0.3% to the inflation rate. Elsewhere, the ECB formed an action plan to further incorporate climate change considerations into its monetary policy framework; a move that was interpreted as indicating a future preference towards green bonds or bonds from ESG-friendly corporates.

RECENT COMMUNICATIONS: Since the prior meeting, a bulk of the noteworthy commentary has centred around the strategic review. On which, President Lagarde recently noted “I think that what we will have to do now is redefine our forward guidance to align it with the strategy review”, adding that the upcoming meeting will see some interesting variations and changes. On the policy outlook, the President stated that when the current PEPP concludes in March 2022, it will need to “transition into a new format”. Elsewhere, Germany’s Schnabel has remarked that “inflation overshoots may be the result of the Governing Council exercising patience in adjusting its policy stance when faced with an improving outlook”. Adding, “higher inflation prospects need to be visibly reflected in actual underlying inflation dynamics before they warrant a more fundamental reassessment of the medium-term inflation outlook”. France’s Villeroy has signalled a patient approach to policymaking by noting that “strategy is long-term but policy can be adapted at any monetary council meeting,” however, “we have at least four such meetings between now and the end of the year.” Portugal’s Centeno has recommended that the ECB decouples its forward guidance on asset purchases from interest rates on the basis that “in the current format one of the decisions is anticipating the other in a way that I don’t think is effective”.

RATES: From a rates perspective, consensus looks for the Bank to stand pat on the deposit, main refi and marginal lending rates of -0.5%, 0.0% and 0.25% respectively. Current forward guidance that notes “rates will remain at present or lower levels until the Governing Council sees the inflation outlook robustly converge towards a level sufficiently close to, but below, 2%” will need to be adjusted to reflect the Bank’s new symmetrical inflation mandate. The overall signal from such a move has been interpreted to infer lower nominal rates for longer. However, with rate hikes some way off for the Bank, the tweak to forward guidance is set to have little bearing on the immediate policy outlook.

BALANCE SHEET: Any tweaks to the Bank’s pace of PEPP purchases are not expected to take place until September given that such decisions are currently made on a quarterly basis (previous review was in June). Given that hawks were calling for a slowing in the pace of purchases at the June meeting, analysts had expected to see a consensus for a reduction in two months’ time. The continued spread of the Delta variant and unveiling of the strategic review could challenge this assumption. However, even if the ECB proceeds with slowing down purchases in September, policymakers might opt to signal greater longevity to their bond-buying given that its 2023 inflation projection stands at just 1.4%. With an eye on the PEPP set to conclude in March 2022, President Lagarde has already hinted that the programme could “transition into a new format” next year. This would suggest a bolstering of the conventional APP (currently EUR 20bln a month). Such a move had been widely touted by desks for many months. However, a more explicit emphasis on this could lead desks to revise up their estimates of how much the APP will be enhanced in 2022. From a forward guidance perspective, ING notes that signalling for APP is pretty vague by noting that the programme is ‘to run for as long as necessary to reinforce our policy rates”. In order to lay the groundwork for a transition from PEPP to APP, the Dutch bank suggests that the ECB could opt to link APP closer to the inflation target.

PRESS CONFERENCE: President Lagarde will likely use the press conference as an opportunity to reaffirm the findings of the strategic review and explain how any adjustments to forward guidance align with the outcome of the review. It is worth noting that President Lagarde already hosted a press conference (8th July) and therefore a lot of the upcoming presentation will centre around already covered ground. However, with the Governing Council having met again since then, there may be some opportunity for the refinement of messaging from the President after canvassing the views of policymakers. On the more dovish end of the spectrum, members of the GC will wish that the review is seen as a more resolute commitment to pursuing easier monetary policy for longer. Whereas opposition views will see the review as more of a formalisation of the Bank’s approach that it was already taking and therefore there is no need to deviate from the current policy trajectory. How Lagarde comes down on this perception of the review will likely provide the key takeaway on the day. That said, the muted reaction to the review since its unveiling suggests that the market is not prepared to radically rethink its perception of thinking in Frankfurt at this stage. Interestingly, from a formatting perspective, Lagarde has informed market participants that “a new, more narrative-based, and more concise monetary policy statement will replace the introductory statement at our monetary policy press conferences”. Therefore, those who follow the usual formulaic start of the press conference will need to adjust to the new format. Elsewhere, the press conference will focus on the Eurozone recovery and impact from the spread of the Delta variant ahead of a more comprehensive assessment in September. 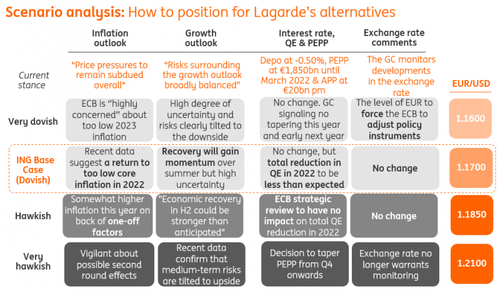 And here is a comparable scenario snapshot courtesy of VandaTrek. 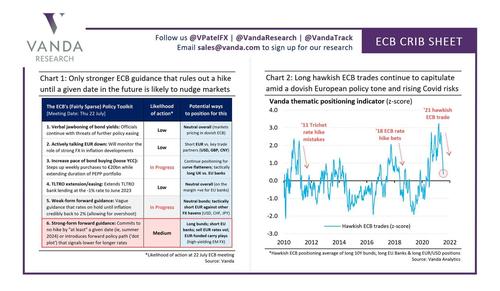