Amazon is pushing back against the Biden Administration’s effort to impose new anti-trust strictures on Big Tech by filing a complaint with the FTC asking that Lina Khan, recently confirmed as head of the commission, recuse herself from all dealings involving Amazon. 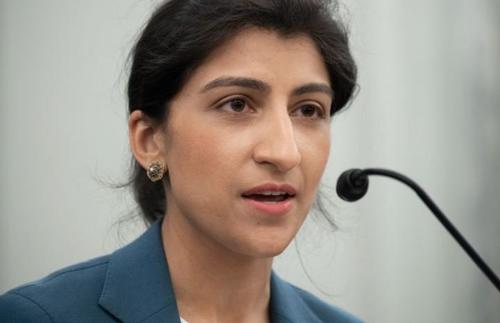 In its request, filed with the agency on Wednesday, the company argued that Khan should be barred from handling enforcement decisions involving Amazon because Khan “on numerous occasions argued that Amazon is guilty of antitrust violations and should be broken up.” Amazon added that “these statements convey to any reasonable observer the clear impression that she has already made up her mind about many material facts relevant to Amazon’s antitrust culpability as well as about the ultimate issue of culpability itself.”

“Given her long track record of detailed pronouncements about Amazon, and her repeated proclamations that Amazon has violated the antitrust laws, a reasonable observer would conclude that she no longer can consider the company’s antitrust defenses with an open mind,” Amazon said in a statement. “Indeed, doing so would require her to repudiate the years of writings and statements that are at the foundation of her professional career.”

The petition has been filed as the FTC is in the middle of a review of Amazon’s deal with movie studio MGM, which it’s seeking to acquire for a whopping $8.45 billion.

Other antitrust talking heads have said the deal would likely be difficult for the government to stop, though it did help revive complaints about the economic power of Big Tech. The FTC is also pursuing a wide-ranging anti-trust probe into Aamzon’s business practices.

Democratic Senator Elizabeth Warren asked Khan on Wednesday to ensure she conducts a “broad and meticulous review” of the MGM deal, saying the deal could have anti-competitive effects on video streaming.

“The FTC should disfavor approving deals involving parties with a known pattern of inhibiting competition and harming consumers and workers,” Warren said. “Allowing such firms to continue buying up competitors would only exacerbate these abuses of market power.”

Khan established her profile in the antitrust world with a 2017 paper she wrote while still a law student exploring Amazon’s dominance. Entitled “Amazon’s Antitrust Paradox,” the paper explained how the online retailer came to control key infrastructure of the digital economy and how traditional antitrust analysis fails to consider the danger to competition posed by the company.

Khan, a Democrat, currently leads the five-member commission which enjoys a 3-2 majority.

A federal judge recently delivered Facebook a major victory by dismissing an anti-trust lawsuit brought by the DoJ and a group of states’ AGs. Is Amazon hoping for a Hail Mary of its own?