“Scared Me To Death” – 2 Earthquakes Rattle Baltimore City In Days

“Scared Me To Death” – 2 Earthquakes Rattle Baltimore City In Days

Something very odd is happening around the Baltimore Metropolitan Area, where two earthquakes have been recorded in a matter of days. The occurrence of earthquakes in the metro area is rare.

When we think of earthquakes in the US, they’re usually in California, the Coastal Pacific Northwest, Alaska, Hawaii, among other hotbed areas.

WBAL-TV reports that a 2.6 magnitude earthquake rattled the area on Friday, and another 1.7 magnitude hit on Sunday. 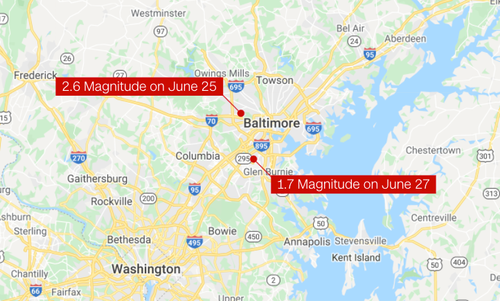 “These little ones like this are just a very quick jolt,” Dan Blakeman, a geophysicist with the United States Geological Survey (USGS), told The Baltimore Sun newspaper.

“The 1.7 — if it turns out to have been felt, and it’s possible — it’d just be by people very close to where it happened,” Blakeman said.

“There could be a couple of others here,” Blakeman continued. “A lot of times, you’ll get small quakes like this, and we’ll have maybe three or four of them, and we just call it a swarm, basically because there’s no real big aftershock. There’s no way to predict if there will be another one or not.”

Wanda Binns, a resident of Woodlawn, the epicenter of the first quake, told WBAL, “it scared me to death. Certainly, you would expect to see it on the West Coast. Who would think of something like this happening here?”

“It was a little scary,” said Kim Dixon of Woodlawn. “There was shaking of the house that I never experienced before.”

The last quake to strike the area was felt in 2011 when a 5.8 magnitude was recorded in Richmond, Virginia.

Is the awakening of an ancient fault on the East Coast in nearing?