After a past year of continued simmering Himalayan border tensions, particularly after the deadly June 2020 incident wherein Chinese and Indian border troops were in a fierce clash, India has escalated its stance by moving 50,000 additional troops to the Chinese border.

While the nuclear armed nation already has an estimated 200,000 stationed there, Bloomberg is reporting the alarming “historic shift towards an offensive military posture against the world’s second-biggest economy“.

New Delhi is framing this as a necessary response to China’s own high altitude build-up, which reportedly stretches back to last summer, when there were skirmishes particularly along the India-Chinese border Line of Actual Control (LAC) in Galwan Valley. China has even of late reportedly militarized high altitude civilian airbases along it border with India.

Chinese permanent or semi-permanent bases began to appear in that disputed region, as well as tanks and artillery units late last summer into Fall of 2020. The initial June 15 Galwan Valley incident which left 20 Indian troops dead and an untold number of PLA casualties, had been the worst incident in years.

Here’s more on the significance of this “Goliath vs. Goliath” moment which too few among Western pundits seem to be taking enough notice off via Rabobank…

While previous deployments were aimed at blocking Chinese intrusions, the latest reportedly allows “Indian commanders more options to attack and seize territory in China if necessary in a strategy known as an ‘offensive defense.'” This is in response to a Chinese build-up, including the construction of airfields, runway buildings, bomb-proof bunkers, fighter jets, long-range artillery, and tanks. Markets will ignore the very fat tail risks inherent in two Asian Goliaths acting like this because of the liquidity provided by the US central-bank giant – yet the latter has no real sway in this sphere.

So all of this means we could soon witness another deadly border conflict on par with the June 15, 2020 fight which resulted in multiple rounds of attempted military-to-military peace talks.

Is it a fresh threat perception or offensive defensive?

While those talks did appear to effectively diffuse the immediate potential for the outbreak of a wider border war, they clearly didn’t do much in terms of deterring a troop build-up on either side.

Below: map showing contested border regions with both Pakistan and China, including site of the last Galwan Valley clash, which gained international attention resulting in a series of threats and counter-threats at the time… 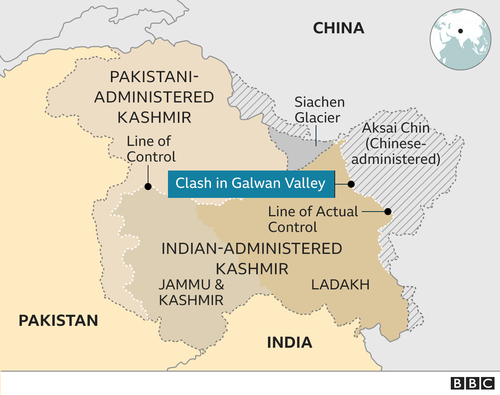 On this note, one Indian former army commander pointed out to Bloomberg that “Having so many soldiers on either side is risky when border management protocols have broken down,” given that “Both sides are likely to patrol the disputed border aggressively. A small local incident could spiral out of control with unintended consequences.”