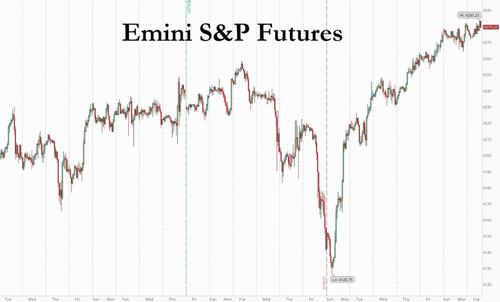 While sentiment remains buoyant, investors are growing concerned by the latest evolution of the Delta variant, which is increasingly seen as a growing threat to the ongoing economic recovery in many areas, said Pierre Veyret, a technical analyst at ActivTrades. Even if the economic impact is “unlikely to be significant” in developed countries, “the inconsistency in vaccination campaigns in other parts of the world is likely to lead to an uneven recovery,” he said.

Others echoed this sentiment: “The Delta variant has also emerged in our client conversations as a potential threat to reflation/inflation,” JPMorgan Chase & Co. strategists led by Marko Kolanovic said. “The economic consequences are likely to be limited given progress on vaccinations across developed market economies. It could, however, pose some risk of a delay in the recovery in countries where vaccination rates remain lower.”

In premarket trading, Morgan Stanley jumped more than 3% in pre-market trading after it said it will double its quarterly dividend. JPMorgan and Goldman gained 0.2% and 1.1%, as they hiked their capital payouts after they passed the Fed’s latest stress test. Facebook edged up 0.2%, a day after crossing $1 trillion in market cap and joining the likes of Apple, Microsoft, Saudi Aramco, Amazon and Google-owner Alphabet that now make up 10% of world equities. Energy companies drifted lower, with Exxon, ConocoPhillips, Schlumberger Occidental and Marathon Petroleum all falling between 0.3% and 2.5% as oil prices dropped nearly 1% on concerns around fuel demand outlook. Cruise operator Carnival Corp’s shares fell 1.6% in U.S. pre-market session. Other notable premarket movers:

In Europe, the Stoxx 600 Index traded modestly higher,  with automakers leading the advance with a gain of 0.9%. New limits on travel from Britain prompted by the Delta variant of the virus dragged on cruise operators and airlines. The Eurostoxx 50 gained 0.5%, with the DAX outperforming peers as auto and chemical names led gains. Renewable-energy stocks top the Stoxx 600 Energy index after JPMorgan said it sees a “catalyst-rich” second half for the sector. The broker upgraded its rating on wind-turbine maker Vestas, which rose as much as 6.3%. Here are some of the biggest European movers today:

The MSCI index of Asia-Pacific shares fell for the first time in six days as countries in the region struggled to contain the highly transmissible strain and rising concerns it will hamper an economic recovery. Financials and consumer discretionary sectors were the biggest drags on the MSCI Asia Pacific Index. The gauge slipped as much as 0.7%, poised to snap a five-day winning streak. China and Hong Kong led losses in Asia, while investors sold value plays in Japan. Cyclicals led a selloff in Singapore stocks amid lagging reopening plans. “The current weak market sentiment in Asia seems to be caused by the fear of a further spread of the delta strain of Covid-19,” said Kelvin Wong, an analyst at CMC Markets (Singapore) Pte. It has “also put a damper on the reflation theme play that is particularly sensitive for most Asian stock markets that are heavily weighted to cyclicals stocks,” he said. The MSCI Asean Index dipped again, headed for a fresh seven-month low amid extended virus curbs. The gauge fell in 10 of the last 11 sessions. Movement restrictions have also dented the performance of Asean currencies. Since June 21, the Thai baht has been the worst performer against the U.S. dollar, sliding over 1%, while the Indonesian rupiah and Malaysian ringgit have also lagged.

In rates, Treasuries were slightly cheaper across the curve although yields remain within a basis point of Monday’s close following muted Asia and European morning sessions. Treasury 10-year yields around 1.48%, slightly cheaper on the day along with rest of the curve; bunds lag by 0.5bp and gilts by 1bp. Bunds lagged ahead of the EU’s sale of 5-, 30-year NGEU debt; gilts also underperform. Bloomberg notes little attempt to fade Monday’s rally with month-end remaining in focus. Key employment releases and activity data due later this week may also keep investors sidelined.Supply dynamics favor Treasuries with bond supply on hiatus until mid-July while month-end demand may also add support.

In FX, the Bloomberg dollar spot Index advanced as the greenback traded higher versus all of its Group-of-10 peers apart from the yen; the euro fell to a one-week low of $1.19. The pound fell to its lowest level in more than a week amid broad dollar strength as investors positioned for quarter- and month-end flows. Norway’s krone slumped with oil prices as the coronavirus resurgence raised concerns about demand ahead of an OPEC+ meeting this week that could see the alliance boost some halted output. The Australian dollar drops on risk-off price action spurred by lockdowns in Sydney and Darwin to contain outbreaks of the highly contagious delta strain; the New Zealand dollar also dropped. RBNZ Governor Adrian Orr says economic activity is returning to its pre-Covid levels, supported by the nation’s ability to keep the virus contained along with significant monetary and fiscal stimulus. USD/JPY little changed around 110.60 after declining for three consecutive sessions; super-long bonds in Japan were weighed by concern of potential increase in supply.

In commodities, oil fell again as a coronavirus resurgence raised concerns about demand ahead of an OPEC+ meeting this week that could see the alliance boost some halted output. While the crude market has tightened, the latest flare-up could play a part when OPEC+ gathers Thursday to decide on output levels in August. Crude futures dropped with WTI down more than 1%, through Thursday’s lows, before finding support near $72. Brent slips lower, supported near $74. Spot gold drops ~$7 to trade near $1,771/oz. Base metals are mixed: LME aluminum rises over 1.25%, nickel drops 0.75% to underperform peers.

Despite oil’s recent loss of momentum, prices are still up about 9% this month. Key regions including the U.S. and China are rebounding from the virus, while India’s biggest refiner is boosting fuel production. Futures and swaps in leading pricing locations are in a bullish backwardation structure, although the spread is narrowing in what could be early signs of some weakness.

Going ahead, all eyes will be on a crucial monthly employment report on Friday and the second-quarter earnings season, beginning July, which could decide the path for the next leg of the equity markets. A reading of the Conference Board’s consumer confidence index, set to be release at 10 a.m. ET, is expected to rise to 119 this month after steadying in May.

A quick look at global markets courtesy of Newsquawk

Asian equity markets traded subdued with the regional bourses mostly lower after the mixed performance on Wall Street where cyclicals/value were pressured but tech outperformed amid a decline in yields to lift both the S&P 500 and Nasdaq to fresh all-time highs, although US index futures have since eased off their record levels during overnight trade. ASX 200 (-0.8%) was pressured as strength in tech was nullified by weakness in the commodity-related sectors and with risk appetite also subdued after further lockdown announcements concerning Queensland and its state capital of Brisbane, as well as Perth and Peel in Western Australia. Nikkei 225 (-0.8%) declined as exporters suffered from detrimental currency inflows, while the data from Japan has been mixed with better-than-expected Retail Sales data offset by a worse-than-feared increase in the Unemployment Rate. Hang Seng (-0.9%) and Shanghai Comp. (-0.9%) also conformed to the negative tone with the decline in Hong Kong led by China’s oil majors after the recent slump in crude prices and amid ongoing frictions with US where President Biden is said to work with Congress on the China competition bill. Finally, 10yr JGBs were higher following the recent bull flattening in the US but with gains only marginal for the Japanese benchmark amid mixed results at the latest 2yr JGB auction.

Bourses in Europe have adopted more of an upside bias (Euro Stoxx 50 +0.5%) following a relatively mixed cash open – which did coincide with a bout of upside volatility across European equity futures at the time. US equity futures meanwhile are contained with a mild downside bias, with the NQ (-0.2%) narrowly lagging its ES (Unch), RTY (Unch), and YM (+0.2%) counterparts following the recent tech outperformance and as yields clamber off recent lows. Back to Europe, it has been a quiet morning thus far in terms of news flow and commentary with a light calendar ahead for the day. Sectors are mostly in the green with defensives lagging and cyclicals outpacing. Chemicals, Autos & Parts, Oil & Gas, and Banks lead the gains, with the latter potentially experiencing a tailwind from US banks resuming and upping dividends after passing the Fed’s stress tests last week. The Basic Resources sector resides as one of the laggards amid losses in the base metals complex. In terms of individual movers, Rexel (+4.5%) tops the Stoxx 600 table amid upgraded guidance. Tui (-4.3%) resides at the other end of the spectrum after a convertible bond announcement. While IWG (Unch) pared gains of over 7% after CC Capital Partners refuted pre-market reports that it is mulling a takeover offer for the group.

In FX, the Buck is broadly firmer vs all major and most EM counterparts, with the index forming a more solid base around 92.000 and looking in a better position to retest recent highs even though rebalancing models are flashing red for Wednesday. It may well be that many have already completed the bulk of their business for month, quarter and half year end given that spot in the currency markets was yesterday, though one can never rule out final position tweaking that at least one bank believes could occur over the NY close today or tomorrow. Nevertheless, the Greenback is grinding higher in the meantime and taking advantage of weakness in other currencies for specific fundamental and technical reasons, as the DXY hovers towards the upper end of a 90.078-91.852 band. Ahead, US consumer confidence is probably the headline macro release following a speech from Fed’s Barkin.

In commodities, WTI and Brent front-month futures are choppy after recently coming under some pressure (before trimming those losses) despite a distinct lack of news flow but heading into a turbulent week for the complex, with the Iranian nuclear situation brewing in the background (with no developments), whilst OPEC+ ministers are poised to assign production quotas at least for August. Sources suggested the group is mulling a further easing of curbs, although the specifics have not yet been ironed out – with analyst forecasts ranging from 100k BPD to 1mln BPD of oil returning to the market in August. ANZ, ING, and S&P Global Platts all expect August quotas to increase by 500k BPD, whilst RBC Capital Markets forecasts OPEC+ to boost output by 500k-1mln BPD at the July 1st meeting. On the other end of the forecast range, Rystad Energy calls on OPEC+ to take a more cautious approach and opt for a production increase of 100-200k BPD in August – citing a jagged path of recovery and fragile demand (full primer available on the Newsquawk headline feed). Note, the JTC meeting will start at 12:00BST/07:00EDT in which the technical committee will review supply/demand data. At the time of writing, WTI Aug and Brent Sep reside around USD 72.50/bbl (72-73/bbl range) and 74.00/bbl (73.40-74.20 range) marks respectively. Over to metals, spot gold and silver have declined in tandem with an uptick in the Buck, whilst some technical factors may have exacerbated losses – i.e. spot gold dipping under USD 1,775/oz and spot silver losing USD 26/oz-status. The precious metals complex remains on standby for macro developments whilst month-end factors are also to be eyed as June and Q2 draw to a close. Base metals have seen a leg lower in recent trade with 3M LME copper flirting with USD 9,250/t (vs high 9,392/t) at the time of writing – with some continuing to cite China’s crackdown in the complex – also reflected in the losses across Dalian iron ore and coke futures overnight.