The first half of this week will be quiet before the tempo picks up substantially with Thursday’s ISM print and Friday’s Non-Farm Payrolls which consensus expects to print at 675k on Friday up from previous 559k, if well below where the number has to be for the labor market to normalize by end 2021. Then, one week from Tuesday, Q2 earnings season begins.

In terms of what to expect from payrolls, Deutsche Bank economists are forecasting a +700k increase in nonfarm payrolls following May’s +559k reading, which in turn should send the unemployment rate to a post-pandemic low of 5.7%. That said, even with a +700k increase, the total number of nonfarm payrolls would still be – 6.9m beneath its level in February 2020. Ahead of payrolls, the jobs plentiful / jobs hard-to-get series within tomorrow’s June consumer confidence release will be interesting as it has been been highly correlated with the unemployment rate. Wednesday’s ADP employment survey (+550k consensus vs. +978k) will also be watched even if has been well above payrolls of late.

The jobs data has been the one clear soft spot in US economic data points that has given Powell reason to hold the line despite a number of hawkish FOMC speeches last week and elevated inflation figures. Although one report wont severely alter the Chair’s t,ming, we see a good number  as further confirmation that we remain on track for policy hints to be dropped at the Jackson Hole meeting come late August.

We also get the US ISM report (Thurs) and consumer confidence (Tues). Both should hold at firm levels with the former again highlighting the supply chain strains that are putting up costs and boosting the chances that inflation stays higher for (much) longer (as long as 4 years according to BofA).

June ISM is expected to come in at 61.0, little changed from the May reading of 61.2 and continuing to signal broad-based growth in activity. Demand for manufactured goods remains elevated with the new orders index climbing to 67.0 from 64.3 in May. New orders are expected to remain strong in June. This along with the strong reading in May should support some growth in the production index, which has fallen by 9.6 points over the past two months reflecting the effects of the supply chain shortages. Meanwhile, the supplier deliveries index, which increases when delivery times are slower, should remain elevated and could very well increase given the recent shutdowns in ports in China. This could lead to inventories falling below the breakeven level (50.0) again. Demand for goods remains strong which should support hiring activity. Moreover, the industry generally offers higher paying jobs that should not be as susceptible to disincentives from the generous unemployment insurance benefits. That said, lack of goods inputs may limit employment gains. Meanwhile, the prices index will remain at historically elevated levels reflecting the ongoing demand supply imbalance, rising oil prices, and high shipping costs.

Conference Board confidence is expected to decrease moderately to 116.0 from 117.2 previously. In May, the Present Situation Index, which measures consumers’ assessment of current business and labor market conditions, rose to 144.3 from 131.9. However, the Expectations Index, which captures consumers’ short term views for income, business, and labor market conditions, decreased to 99.1 from 107.9.  Although stronger economic growth is expected this year, consumers still remain concerned about COVID and higher inflation. 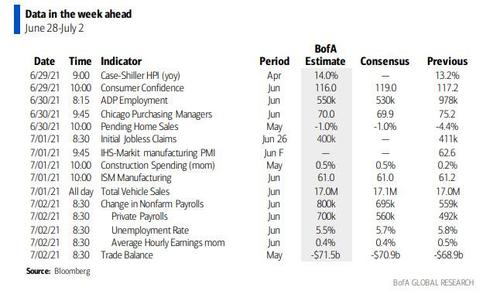 Elsewhere, OPEC+ holds their latest monthly meeting on Thursday. Sources suggested the group is mulling a further easing of curbs, although the specifics have not yet been ironed out, reports suggested a curb-easing of 500kBPD. Look out for more sources in coming days.

We also get the June auto sales number on July 2, which is expected to come in flat compared with the prior month at 17mn SAAR. Auto demand is running way ahead of traditional economic indicators such as the unemployment rate and consumer confidence, but supply side constraints will limit the sales upside in the near term.

Here is Goldman with a focus on key US events: The key economic data releases this week are the ISM manufacturing index on Thursday and employment report on Friday. There are several speaking engagements from Fed officials this week, including from President Williams on Monday.