Tesla’s “Autopilot” feature has been a major discussion following a fatal crash in Texas last month. “Autopilot” in itself implies full autonomous driving capabilities, though Tesla officials told regulators last week that it may not achieve full self-driving technology by the end of this year. Nevertheless, a number of Tesla owners have abused Autopilot.

On Tuesday, California Highway Patrol (CHP) arrested a 25yo man for reckless driving of a Tesla while sitting in the back seat headed toward Oakland from San Francisco.

Param Sharma was arrested without incident on Interstate-80 and booked into the Santa Rita Jail on two counts of reckless driving. 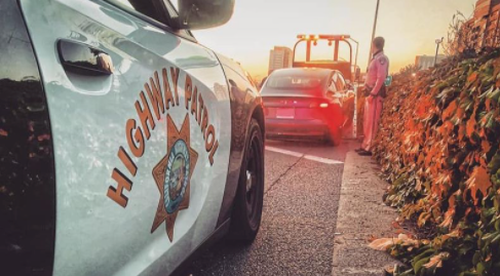 Before the arrest, CHP said members of the public recorded someone who resembled Sharma sitting in the backseat of a Model 3 without a driver.

Local news KTVU’s Henry Lee provided a video of Sharma “in back of this @Tesla ⁩with his foot on the wheel on the Bay Bridge, I-80 & across the region.”

This guy’s been seen riding in back of this ⁦@Tesla⁩ with his foot on wheel on the Bay Bridge, I-80 & across region. ⁦@CHP_GoldenGate⁩ investigating. No evidence of ⁦@MagicofRahat⁩ or Knight Rider hiding-in-seat trickery. ⁦@instagram⁩ 📹: @paressadalycity pic.twitter.com/y30gBGOaN1

Fresh out of jail, Lee interviewed Sharma on Wednesday morning, who said he’s going to keep doing that because “I just pioneered all this…I don’t drive, and I don’t fill up gas.”

UPDATE: Fresh out of jail after being busted by @CHPoakland for driving – or riding – @Tesla Model 3 from backseat, Param Sharma tells @JesseKTVU in exclusive interview he’s going to keep doing that because “I just pioneered all this…I don’t drive, and I don’t fill up gas.” pic.twitter.com/9fqYXWc7rG

Lee asked Sharma if his Tesla crashes and hurts someone, what would you say to that family? Sharma responded: “They’re not going to get hurt – the car doesn’t make mistakes.”

According to Tesla Deaths, there’s been a number of crashes that Autopilot was on.

Multiple videos show a gray Model 3 with California license plate number “BJ09C06” with someone resembling Sharma in the backseat. There was no confirmation if this is Sharma and these videos are from weeks ago.

“The safety of all who share our roadways is the primary concern of the CHP. The Department thanks the public for providing valuable information that aided in this investigation and arrest,” the CHP wrote on Facebook. 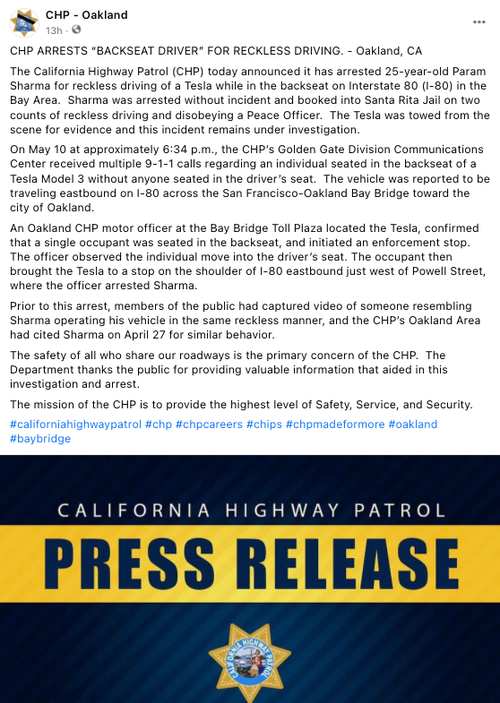 The CHP had asked that anyone who sees “an unusual incident such as this one” immediately call 911 with as many details as possible because it’s illegal in California for autonomous vehicles to operate without humans behind the wheel.

Some have said it’s impossible to operate a Tesla in full self-driving mode without someone in the driver’s seat. But Consumer Reports recently noted that its testers got a Tesla Y to drive without someone behind the wheel.