The Most Hyped Corners Of The Stock Market Come Unglued

The Most Hyped Corners Of The Stock Market Come Unglued

Authored by Wolf Richter via WolfStreet.com,

And they’re joined by the IPO hype-boom stocks, including the spectacularly hyped highflyers that got shot down, such as Zoom (-49% from peak), Coinbase (-29%), or Airbnb (-35%), and they’re in turn joined by the ARK Innovation ETF (-34%). This whole thing has come unglued.

The EV SPAC boom-and-bust is reflected in the WOLF STREET EV SPAC Index, which has collapsed by 57% since its peak on February 17. The index tracks seven EV-related companies that have gone public via a merger with a SPAC: Nikola, QuantumScape (batteries for EVs), Canoo, Lordstown Motors, Romeo Power (batteries for EVs), XL Fleet (EV drive systems for fleets), and Lucid Motors. Since February 17, these seven stocks combined have shed $35 billion in value, which they should have never had in the first place. Easy come, easy go, except when it’s your money (data via YCharts): 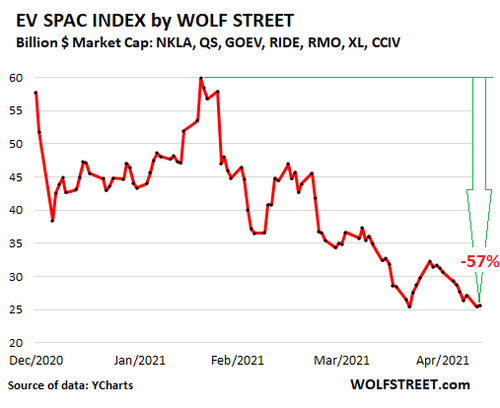 The individual stocks in the EV SPAC index have collapsed even more spectacularly as the individual peaks came with different timing: 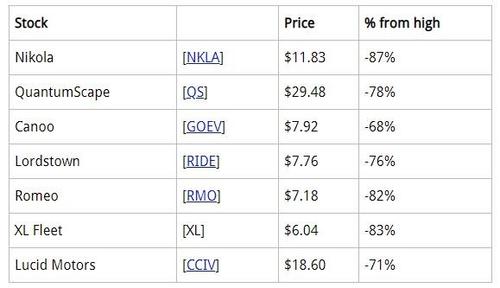 The SPAC boom has been unwinding more broadly, as depicted by the Defiance Next Gen SPAC ETF [SPAK], which tracks SPACs before and after they merge with a target company. The SPAK has plunged 33% since February 16, to $23.35 Tuesday at the close, below where it had been when it was launched in October last year (stock data via YCharts): 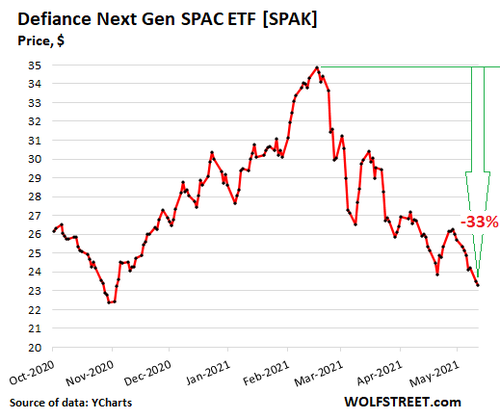 The Renaissance IPO ETF [IPO] has dropped 26% from the intraday high on February 12, after a maniacal rally that started in March 2020 and ended 11 months later, during which the index soared by 252%. And by the looks of it, those stock still have a lot of air under them (stock data via YCharts): 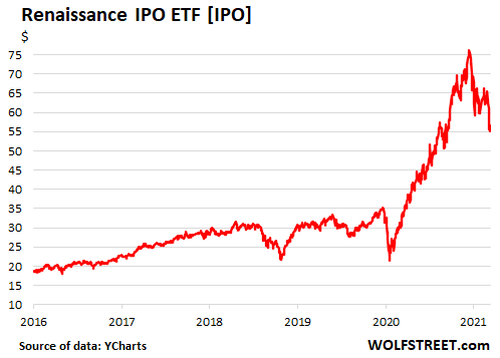 Here are some of the notable top stocks in this IPO ETF: 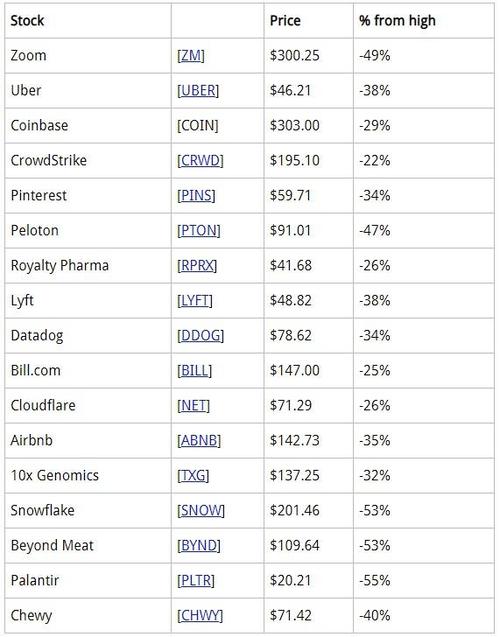 The ARK Innovation ETF [ARKK] stretches into a different direction. It attempts to track “disruptive innovation,” which it defines as a “technologically enabled new product or service that potentially changes the way the world works.” A rather modest goal. This baby is down 33% from its peak on February 12. 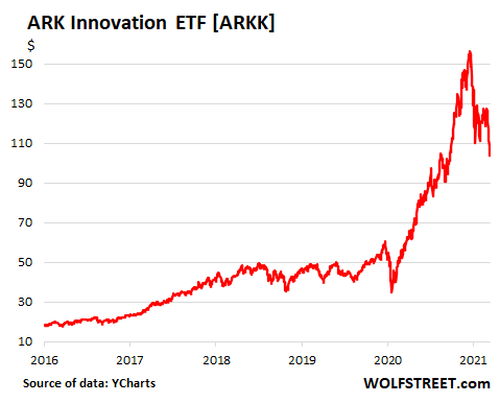 The ETF includes some very large stocks that have had a huge run, such as its largest holding, Tesla, which weighs over 10% in the ETF. Here are the largest five holdings and the drop from their highs:

These stocks and ETFs here were in the most hyped crowd, and many of them had experienced gravity-defying and logic-defying ascents. And those stocks have now come unglued, one after the other, on their on terms, with different timing. And there wasn’t a single trigger.