One week ago, when we reported that Montana was the first state to cancel unemployment benefits in response to the unprecedented worker shortage which was laid bare by the dismal Friday jobs report, we said that “one can only hope that more states follow [Montana Gov] Gianforte’s extremely unpopular, if extremely prudent decision, before the US is mired in 1970s style hyperinflation” but that “we won’t be holding our breath.”

In retrospect, we were badly underestimated the willingness of at least some people to do the right thing, because just hours later South Carolina announced it too was joining Montana in ending all supplemental unemployment benefits programs, which in turn sparked a wave of Republican states following through with what would be a career-ending move for any Democratic politician.

As the WSJ reports overnight, at least nine Republican-led states have rejected enhanced federal Covid-19 pandemic unemployment payments, saying the extra $300-a-week supplement is providing an incentive for some people to avoid work at a time when employers are struggling to find labor.

On Tuesday, Iowa and Tennessee joined the list of states that are moving toward the elimination of the extra benefits ahead of the program’s scheduled expiration in September, which even the U.S. Chamber of Commerce blamed for the sudden collapse in labor supply as millions of Americans opt to stay home and collect benefit checks instead of working.

“Federal pandemic-related unemployment benefit programs initially provided displaced Iowans with crucial assistance when the pandemic began,” Iowa Republican Gov. Kim Reynolds said in a statement that called for the pandemic-related benefit to end June 12. “But now that our businesses and schools have reopened, these payments are discouraging people from returning to work.”

As a result, there are now 9 states that are ending the generous handouts are: Iowa, Mississippi, Missouri, Montana, North Dakota and South Carolina, which have sent letters to the Labor Department asking to end their participation in federal programs including the $300 supplemental benefit and extended payments and benefits for gig-economy and other workers not typically eligible for unemployment benefits. Alabama, Arkansas and Tennessee have announced publicly they plan to opt out of the programs early, but the states hadn’t sent letters to the Labor Department as of Tuesday.

Iowa’s unemployment rate was 3.7% in March, the most recent month available, well below the national average of 6% that month. The rate also isn’t much higher than the 2.9% recorded in the state early last year before the pandemic arrived.

Meanwhile, President Biden on Monday defended the enhanced benefits – which as the latest NFIB survey showed have resulted in the most difficult environment for small businesses to fill job openings… 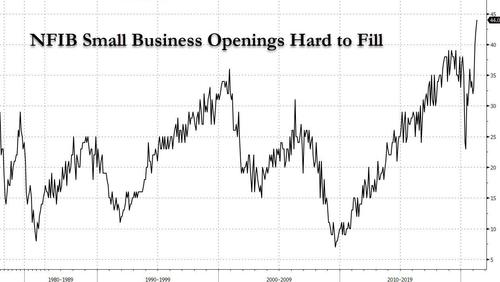 … led to and said his administration would make clear that people can’t turn down suitable jobs and keep collecting benefits, except in specific circumstances. His Democratic administration has said that other factors are keeping workers on the sidelines, such as fear of getting sick during the pandemic and a lack of full-time child care.

… or restaurant legend Wolfgang Puck who said, “I don’t think we should pay people to stay home and not work if there are jobs available.”

Meanwhile, as private employees compete with the US government’s generous wages (to do nothing), inflation is soaring as today’s CPI – the highest since 1981 – showed.

Furthermore, BIden’s Trillions is now self-defeating: spurred in part by a flood of federal pandemic aid, the U.S. economy is poised for blistering overheating as vaccination rates climb and consumer and business activity picks up. A much weaker-than-expected employment report released Friday, however, has fueled concerns among some economists and policy makers that a shortage of workers is slowing the pace of recovery.

Republicans on Capitol Hill say enhanced benefits for unemployed workers are holding back the recovery by making it harder for businesses to fill openings, especially in lower-wage sectors where the enhanced benefits may be bigger than a paycheck.

Unemployed workers are eligible for an additional $300 a week on top of regular state jobless benefits, which average $318 a week, according to the Labor Department. That means the average benefit recipient earns slightly more than the equivalent of working full time at $15 an hour. How much? Former Obama Admin Treasury counselor Steve Rattner recently tweeted that “with enhanced benefits, workers (take Pennsylvania, for example) can now make more on unemployment than they did at their jobs.”

He also showed a chart according to which as of this moment, tens of millions of US workers, in jobs ranging from dishwasher, to hotel clerk, to preschool teacher, to anyone on minimum wage, can now earn more from unemployment than from their regular job. 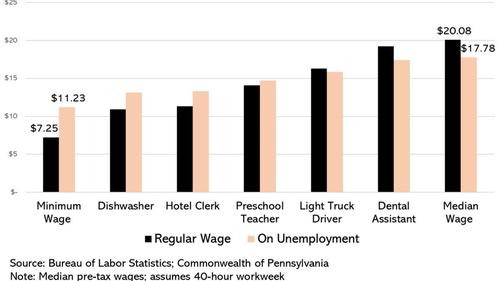 So instead of rewarding sitting on one’s ass, the mostly republican states are pursuing back to work policies: Montana’s Republican Gov. Greg Gianforte said residents would instead be eligible for a $1,200 “return to work bonus” if they were receiving unemployment benefits as of May 4 and subsequently took a job and completed at least four paid weeks of work. Idaho implemented a similar one-time bonus of as much as $1,500 last year.