Authored by Paul Antonopoulos via GlobalResearch.ca,

800 paratroopers from the 82nd Airborne Division of the U.S. Army departed from Fort Bragg in North Carolina last Friday morning for a Swift Response exercise. They were dropped into Estonia in a “joint forcible entry” operation in the early hours of Saturday. The airborne exercise is designed to test the fast response capabilities of the U.S. to defend Estonia in case of a hypothetical war with Russia. It is also part of larger NATO exercises that includes the participation of 30,000 troops doing drills with battlegroups led by the UK in Estonia, Canada in Latvia, Germany in Lithuania and the U.S. in Poland. 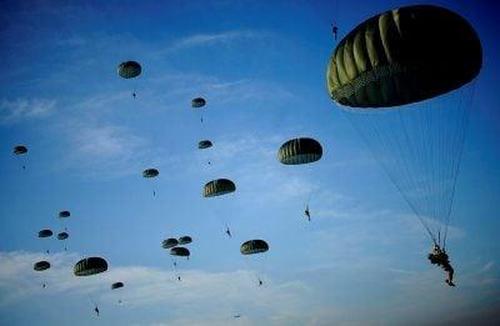 In effect, NATO has mobilized tens of thousands of troops right onto Russia’s border. Moscow has repeatedly expressed concern about a NATO building up in Europe and Russian Presidential spokesperson Dmitry Peskov stated that Russia does not threaten anyone but will not ignore actions that could endanger its interests.

On the Estonian television program Välisilm, Colonel Paul Clayton of the Royal British Armed Forces, unashamedly expressed, in the context of NATO’s military exercises, the types of pressure that NATO is attempting to impose against Russia. He admitted that the Alliance is helping Ukraine train its troops and praised the Estonian government for its readiness to devote more than 2% of its GDP to defense. He also recommended more frequent co-operation with Latvia and Lithuania. In his opinion, this is all the more crucial because NATO’s “Northern Division” is being built in Riga, which consists of military units from the Baltic States under the command of Denmark.

The NATO contingent deployed in the Baltic States is under the pretext of “countering Russian aggression.” Moscow emphasizes, under the pretext of concern for the security of the Baltic States, that NATO has in fact provocatively brought its military bases closer to Russia’s borders. The Kremlin has also repeatedly stated that it has no plans to attack, but NATO continues to grow its potential and Russia has been forced to provide an asymmetric response to its military plans.

It is for this reason at the end of April, by presidential decree, the U.S., UK, Ukraine, Lithuania, Poland, Latvia, Czechia, Estonia, Australia and Georgia were put on a list of countries that are “unfriendly” to Russia. Although Germany and France frequently criticize Russia, Moscow recognizes that they are to some extent independent in their decision making and are not as beholden to Washington’s interests like the listed countries are.

Effectively, what Moscow does by establishing such a list is identity countries that enact policies completely aligned with Washington. Unsurprisingly, all the European Union countries to make the list are former Warsaw Pact members, and this points to two observations.

By creating a list of unfriendly states (which nearly perfectly corresponds to the states involved in large scale NATO military drills on Russia’s borders), Moscow has broken Washington’s ultimatum of “us” or “them.”

By not including France and Germany on the list, Russia is recognizing that the two leading countries of the European Union have agency that can shape and influence the destiny of Europe independently from Washington.

Although the U.S., UK and its vassals are attempting to intimidate Russia through its enormous military exercises, the show of strength does not reflect the reality that will unfold in a hypothetical war as there are huge divisions within the European Union and NATO. The overwhelming majority of member states are unwilling to go to war with Russia despite enthusiasm from Poland and the Baltics, rendering the joint NATO exercises as not an accurate reflection of a real war scenario.