The best way to decrease the risk of Alzheimer’s disease could be a Mediterranean diet that is rich in fish, vegetables, and olive oil, according to a new study.

The research, titled “Mediterranean Diet, Alzheimer Disease Biomarkers and Brain Atrophy in Old Age,” was published in the online issue of Neurology, the medical journal of the American Academy of Neurology, and found a Mediterranean rich diet may “protect” the brain from protein build-up and shrinkage that can lead to the debilitating neurological disease.

The study examines abnormal proteins called amyloid and tau. The amyloid-beta precursor protein plays a vital role in neural growth and repair. However, later in life, a corrupted version can destroy nerve cells, leading to memory loss, while tau is a protein that forms into a tangle. Both are found in the brains of people with Alzheimer’s disease but may also be found in the brains of older adults with healthy brain function.

While there is no single definition of the Mediterranean diet, it is typically high in fish, vegetables, fruits, whole grains, beans, nuts and seeds, and olive oil. The diet has a low intake of saturated fatty acids, dairy products, and red meat. 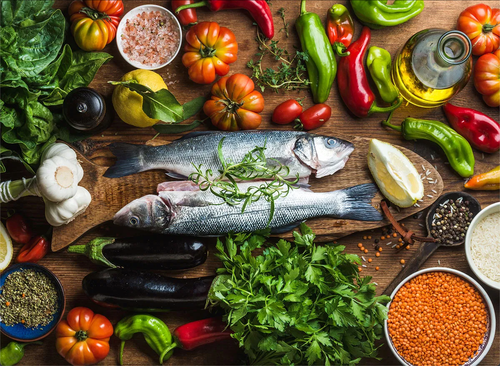 “Our study suggests that eating a diet that’s high in unsaturated fats, fish, fruits and vegetables, and low in dairy and red meat may actually protect your brain from the protein build-up that can lead to memory loss and dementia,” said study author Tommaso Ballarini, Ph.D., of the German Center for Neurodegenerative Diseases (DZNE) in Bonn, Germany. “These results add to the body of evidence that shows what you eat may influence your memory skills later on.”

Ballarini and his team observed 512 people in the study. Of those, 169 were cognitively healthy, while 343 were at higher risk of developing Alzheimer’s disease. Respondents were asked a series of questions about how closely they followed the Mediterranean diet.

Researchers found people who did not follow the diet scored worse in memory tests than those who did.

“More research is needed to show the mechanism by which a Mediterranean diet protects the brain from protein build-up and loss of brain function, but findings suggest that people may reduce their risk for developing Alzheimer’s by incorporating more elements of the Mediterranean diet into their daily diets,” Ballarini said.

For the tens of millions of Americans who chowed down on western foods with high intakes of dairy and red meat during the pandemic – perhaps one should rethink their dieting habits if they want to be cognitively there when they grow old.