Three Places Where “Permanently” Higher Inflation Could Come From

Three Places Where “Permanently” Higher Inflation Could Come From

Tomorrow we get a CPI number which according to consensus at least, will be historic: it will be the first 0.3% sequential increase in core (not the much higher headline) prices this century… 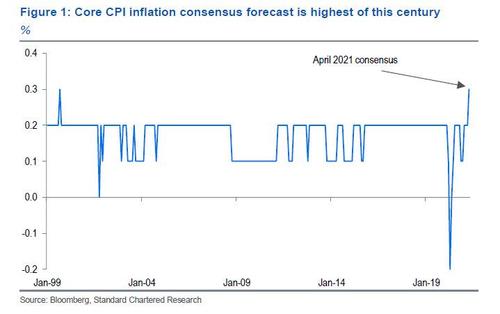 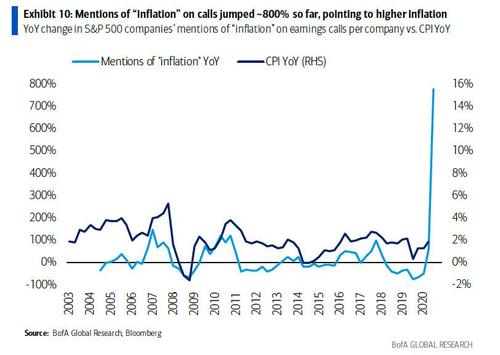 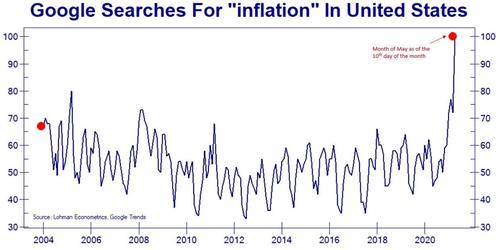 Yet while households are growing more convinced with each passing day that higher prices will stick, with the NY Fed’s latest survey of consumer expectations revealing that over the next year consumers anticipate gasoline prices jumping 9.18%, food prices gaining 5.79%, medical costs surging 9.13%, the price of a college education climbing 5.93%, and rent prices increasing 9.49%… 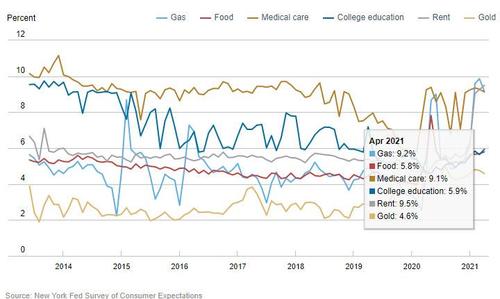 … neither the Fed, nor sellside analysts are willing to concede as much yet. Take BofA’s chief economist Michelle Meyer, who expects core PCE inflation, the Fed’s preferred measure, to peak at 2.3% this quarter, before settling back down to 1.9% by the end of 2021. Meyer then expects prices to trend slightly higher over the medium term, eventually surpassing the Fed’s target consistently enough (and in an environment of full employment) that interest rate hikes will be warranted, possibly not until the second half 2023.

Needless to say, the market disagrees, and especially the bond market, where traders are pricing in far more inflation and faster Fed hikes than that. But, as BofA’s Jared Woodard notes, they often do, and are usually very early: as shown in the chart below, since 2007, rates implied by Fed funds futures have been, on average, 54bp higher than actual interest rates one year later. 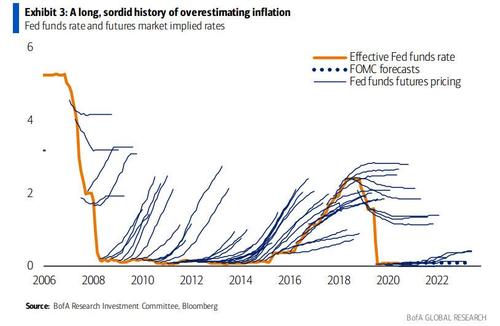 But maybe this time will be different? As Woodard counters, the challenge for those who expect permanently higher or harmful inflation is to explain where it will come from. In response, the BofA strategist says he can see three possible sources of “permanent” inflation, if no no plausible ones.

In 2020, many firms cut capacity and reduced inventories, expecting a long recession. The faster rebound has meant shortages in lumber, corn, copper, etc. Some bottlenecks may lack quick fixes (e.g. semiconductors), but many others can be resolved. 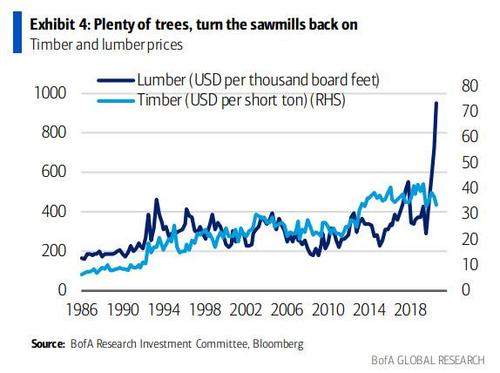 More importantly, whether necessitated by Covid or by the reorientation of supply chains toward reliable democracies, a period of higher capex should be tolerable. Many companies have proven pricing power, and in Q1, US corporate profit margins are at record highs. 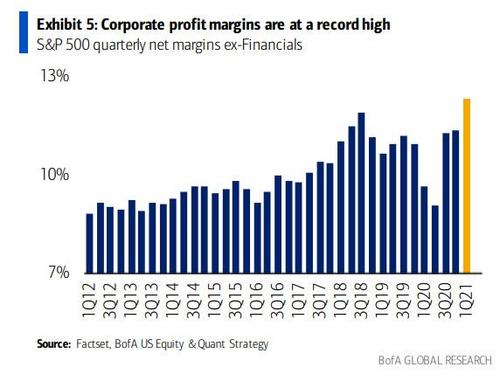 Woodard then predicts that there are also good reasons to think that any sharp surge in wages will end by Q4 for the following reasons:

Indeed, we have 9.8 million unemployed workers and BofA economists expect an additional 2mm+ returning to the labor force by the fall, by which point the Biden unemployment checks will have expired. 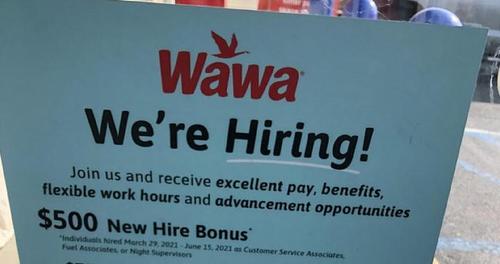 … are a sign of a temporary mismatch, not an incipient spiral. “A bonus is not a raise”, according to BofA… although it’s a key part of one’s compensation – we wonder how many BofA bankers would work without one.

In any case, BofA believes that a higher long-term trend in wage growth would be positive for GDP and productivity: of the firms that said they will not raise capex in the latest Duke CFO survey, 2/3 said it is because they “have no need to expand capacity.” Persistent higher demand is necessary for sustained corporate investment. It’s, therefore, hard even to imagine a wage-spiral tail risk according to Woodard who argues that it would take steady wage gains of 10-12% to push inflation to the levels of the 1970s & 80s… 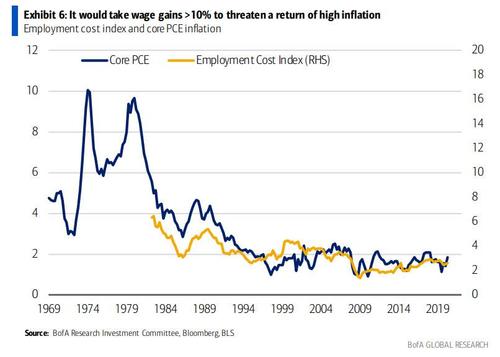 … and the US economy is structured very differently today. Non-elite unions are politically toothless. Technology penetrates every industry. The offshoring of more services is coming.

The last argument against persistent inflation is that there are also no signs of excess demand. The latest BofA consumer appears to affirm a “fiscal liquidity trap” thesis.

While we are confident that many readers will disagree, Woodard concludes that “in sum, we expect high inflation levels to be transitory because structural deflationary forces are very strong, most supply shortages can be resolved, wage increases are modest (and helpful long-term in any case), and there is no evidence of excess demand.”

Bullshit, you say. Between the trillions in stimulus and the monetary pump, this time is different.

Perhaps, but there is another problem: anyone wishing to hedge against soaring inflation faces a daunting high cost (one could almost say “inflationary” cost).

As shown in the chart below, historical data show that a permanent portfolio allocation to inflation assets only hurts returns (unlike a deflationary bias). Allocating $1 in 1974 equally to a basket of commodities, gold, global value, and European equities – i.e. inflationary assets –  was worth $38 today; at the same time, an allocation to IG corporate bonds, Treasuries, US growth stocks, and the S&P 500 was worth $104. 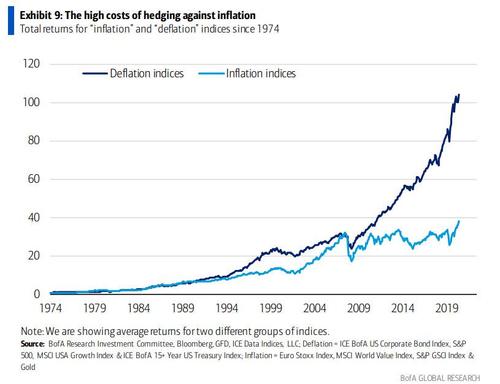 Curiously, even a tactical allocation imposes a significant cost unless timed perfectly. BofA economists expect 3.6% average inflation for Q2. Over the last 30 years, there were five occasions when CPI surged above that level (May’01, Sept’05, June’06, Oct’07, June’11).

On average, investors who bought inflation assets on those triggers suffered losses over the next year: commodities -10%, value vs growth -2%, EU vs US equities -3% and cyclical vs defensives -1%. Only TIPS and small vs large saw positive average returns. And today, 10-year TIPS yield -0.93%, just 19bps from record lows.

In conclusion, Woodard writes that “the best time to buy inflation protection would be after the next “natural” recession, not when inflation expectations are already at 13-year highs.”

While that may true, one thing Woodard refuses to admit – or perhaps forgot to acknowledge – is that in a world where even the BIS admits it is in the business of manipulating gold lower, crypto has emerged as the best inflation hedge in the world. In that case, his entire argument about “expensive” inflation hedges can be thrown out, because one look at the return of bitcoin, ethereum, or the various DeFi tokens in the past year, and the conclusion is that the market is convinced that what is coming will make the Weimar and Zimbabwe hyperinflations seem like a walk in the park…