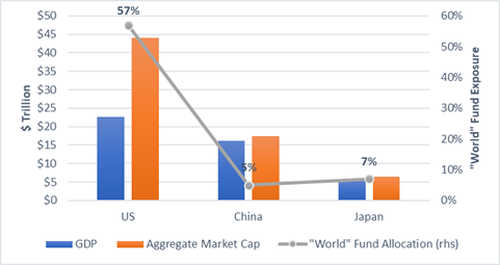 Relative to GDP or total market capitalization, global equity indices, and by proxy most investors, are massively underweight Chinese stocks. The case for upping exposure to China looks even stronger when we look at the selection opportunity, liquidity and growth, especially relative to China’s Asian competitor, Japan. China has 2x the number of listed stocks as Japan, and those stocks have 3x the median market cap of Japan.

Despite a massive difference in historic growth rates, the MSCI Japan index returned the exact same amount as the MSCI China index over the past decade, and with way less heartburn along the way.

This is in large part because investors paid a hefty premium to own Chinese stocks throughout the decade. The growth differential, it appears, was more than priced in. The picture today is little changed from a decade ago: the price differential between the two is still one of the biggest for countries outside of US markets, a concerning data point for China bulls.

Chinese stocks are around 25% to 200% more expensive than Japanese stocks, depending on how you measure them.

But this simple analysis assumes a Chinese public equity is the same thing in kind as other developed-market public equities like a Japanese stock. There is a relevant quote, often misattributed to Stalin: “I consider it completely unimportant who in the party will vote, or how; but what is extraordinarily important is this—who will count the votes, and how.” For minority voting shareholders of Chinese “public equities,” we think both may be extremely important. This is because Chinese public equities are neither “public” nor “equitable” to the extent we can measure.

As shown below, Chinese equities have a public float of 45% on average, making them technically not public. Despite China’s maintenance, until recently, of the democratic-sounding “one share, one vote” law, in practice, this means that state-owned or quasi-state-owned institutions will often maintain full control according to academics and Pulitzer Prize winning journalism. This is a system of collective equity that might be thought of as having less of the nuance of James Madison and more of the nuance of Mao’s 1949 concept of The People’s Democratic Dictatorship. This “democracy for the people and dictatorship over the reactionaries,” is most likely why the reactionary practice of shareholder activism is “quite uncommon” in China, according to legal experts.

But why rely on the opinions of experts and academics in their ivory towers? As shown below, when you ask Chinese people themselves, they routinely rank themselves alongside Bhutan, the Kyrgyz Republic, and Colombia on most every metric related to the equitable treatment of shareholders, again making them not technically “equities” to the extent we can measure this.

Finally, in comparing Chinese to Japanese equities, it may be useful to consider not just the valuation and transparency risks but also the debt markets these equities are subordinated to.

Below is the aggregate amount of corporate ex-financial debt in China and Japan over the last 20 years. The financial statement growth that makes Chinese equities so attractive compared to Japanese equities has come at the cost of skyrocketing debt.

And while the Chinese ratings agencies have ranked most all issued domestic bonds in the AAA to AA investment grade range, when the imperialist swine at S&P Credit Ratings applied their independent analysis on the publicly available Chinese accounting data, this resulted in a downgrade of the same sample of Chinese issuers from exclusively investment grade to largely speculative and junk grade.

China is a unique market. We can think of only one historical analogue to a country like China today. A country whose capital markets rose at breakneck speed from the ashes of war and economic catastrophe. A country with a market that emerged as nearly dominant globally after prolonged sustained growth, at massive scale, with high valuations and extremely accommodative corporate lending. A country that adopted many capitalist standards to get there while allowing the government and complex webs of corporate crossholdings to play a heavy-handed role in directing national industrial and technological efforts before hitting peak population and a non-performing loan crisis. That country is Japan in the 1980s, before the asset bubble burst.

But China is quite different from the historical example of Japan for many reasons, including that China is one of the very few officially Marxist-Leninist countries surviving today. North Korea, Laos, and Cuba don’t really have markets, let alone stock markets. As such, this extreme survivorship bias makes it difficult to estimate your long-term probability of realizing a return on (or return of) your capital in Marxist-Leninist states. We are left with only rough comparable examples like the Ho Chi Minh City Stock Exchange in Vietnam and Venezuela’s Caracas Stock Exchange. We can’t say much empirically on such a limited sample, but for what it’s worth, all three markets joined the UN’s Sustainable Stock Exchanges Initiative, giving your capital what some would argue is two layers of communist oversite.

It may be tempting to assume that when you put your money in a foreign country, no matter which one, you will get it back a decade later, as has occurred quite regularly since the ’70s. Capital controls were really something that only our grandparents had to worry about. But foreign investors thinking about Chinese exposure over the next decade have neither the assurance of constrained law nor credible deterrence. Meanwhile, in Japan, investors enjoy the backdrop of a close ally with a pluralistic liberal democratic constitution and the geopolitical insurance policy that only a division of US Marines in Okinawa can provide.

For these reasons, we think of allocation decisions to the largest countries outside of the US as more complicated than a weighting of fully interchangeable financial instruments.

Our conclusion is that, compared to Japanese public equities today, Chinese public equities are not technically public or equitable to the extent we can measure. They are massively more expensive and are probably subordinated to much more dubious lending practices than the government-approved ratings agencies would let on, according to S&P’s mathematical standards. But we must admit that the trailing and one year forward growth is red-hot in the market that’s marked-to-Marxist.