Financial writer John Rubino says there is no easy way out for the financial and political mess the United States has created for itself. 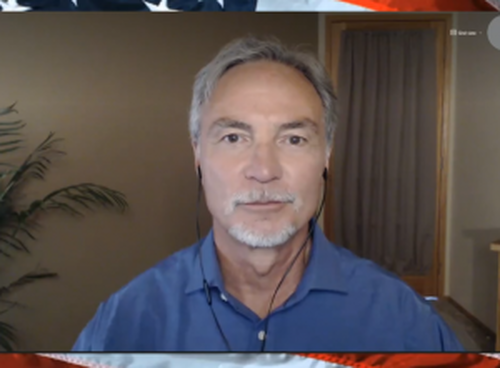 Rubino starts with the economic problems and explains, “Now, inflation is starting to spread…”

“Look at lumber.  If you are trying to build a house, it’s $35,000 more now than it was two years ago just because of lumber.  Iron ore, house prices, grains, food and you name it, we’ve got inflation going on.  At the same time, we have an apparent labor shortage.  All these companies are coming out and saying we would love to take on all the business we are being offered to us, but we don’t have enough people.  Even Uber and Lyft cannot find enough drivers.  It’s weird it is happening this soon, but we should not be surprised since we dumped tens of trillions of dollars into the economy over the past year.  This is what you would expect if you get the money supply going up 30% or 40%, which it did.  This is what you get.  The economy overheats.  Now, we are confronted with the nightmare scenario in a fiat currency system.  Inflation starts to pick up, which it is.  That sends interest rates higher, which is happening.  That threatens all the heavily indebted people out there because as rates go up, their costs rise.  Then they go bankrupt in increasing numbers, and the system collapses.  We are in the early stages in that kind of a process, and I don’t think anybody knows what to do about it.”

It seems Sam Zell knows what to do.  Who is Sam Zell?  Rubino says, “Well, Sam Zell is one of the biggest real estate investors in the world.  The guy has a history of being right at the big turning points…”

”  He will build a massive commercial real estate empire with billions and billions of dollars of offices and shopping malls and stuff like that.  Then towards the end of the cycle, he will start selling.  He will basically get out at the peak of the market.  Then the market tanks, and he buys back in.  So, he’s a really good indicator of where the economy is going because he has such a history of being right.  So, now, the guy is buying gold.  I think this is the first time I have ever heard of him doing that.  He usually just sells his real estate and goes to cash.  Now, he’s selling out of some of his real estate, and instead of putting it into a bank, he’s buying gold with it.  This is a good sign from a smart guy…This guy is right so frequently, the fact that he is buying gold is a really good gold buying signal.”

Rubino goes on to warn, “I think the next stage in the market psychology is when people figure out there is no adult supervision left in these markets…”

”  Daddy is not going to come home and fix this.  We are at the point where there are no solutions, and that’s when things spin out of control…

This is beyond the ability of any individual to fix.  We can’t save the system.”

Join Greg Hunter as he goes One-on-One with the founder of DollarCollapse.com, John Rubino.