ARK Funds Sold A Third Of Their Apple, Bought More Of Their Own ETFs, Amidst Continued Rout

ARK Funds Sold A Third Of Their Apple, Bought More Of Their Own ETFs, Amidst Continued Rout

As ARK readies itself for what could be another tumultuous day on Tuesday, with the firm’s assets dropping below $20 billion to their lowest level since January, more eyes are turning to how Cathie Wood is steering her firm through the “rough seas”.

ARK’s flagship fund was down another 5% in pre-market trading on Tuesday — falling below the psychological level of $100 per share — and has fallen for 9 of the past 10 sessions, according to Bloomberg, who noted that the decline “accelerated on Monday in the biggest slide in about seven weeks”.

At this point, the “chicken and the egg” argument between ARKK, shares of its components – notably heavily held (and potentially extremely overvalued) names like Tesla and Palantir – and the indicies where its components reside, becomes meaningful conversation and not just fodder. 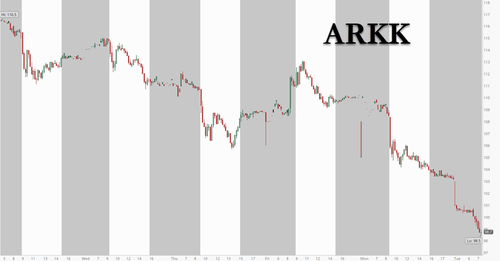 In addition to Tesla selling off sharply Tuesday morning, as we noted, other key ARK holdings like Teladoc and Roku were down about 5% each in the pre-market session.

To make matters potentially worse, it doesn’t appear as though Cathie Wood wants to simply batten down the hatches. ARK Invest appeared to continue its strategy of selling off risk-adverse tech names on Monday of this week, with the firm collectively selling off 30.4% of the Apple shares it held during Monday’s tech pullback. 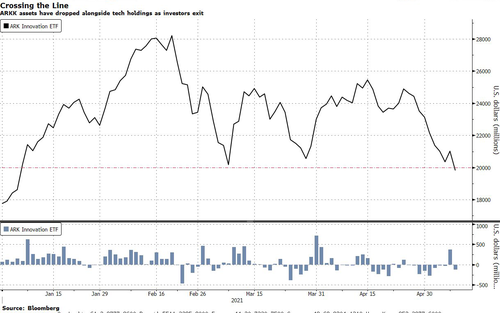 Bloomberg released the figures on Tuesday morning, noting that: “Ark Fintech Innovation ETF, Wood’s only fund that holds stake in Apple, sold 87,560 shares of the iPhone maker and now holds 200,387 shares, according to Ark’s website”. 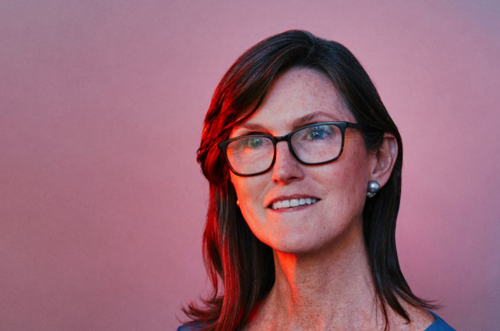 The sale of Apple is noteworthy because it appears to be proof that ARK’s Cathie Wood is following through on her “strategy” of selling liquid big tech names in order to free up liquidity for smaller, illiquid and speculative names – a strategy we have written about numerous times over the last few months. Wood has also been turning around and “investing” that liquidity into other ARK ETFs. For example, on Monday, Wood bought more of its own 3D printing ETF, PRNT, in its new ARKX Space Exploration ETF.

On Friday of last week, with the NASDAQ volatile, Wood took to CNBC to say she “loved the setup” heading into the new week, where so far her flagship fund is nearing a drawdown of almost 10% for the week.

“Oh, I love this setup,” she told a bemused Wilfred Frost last week, although her shareholders who are down 30% in a few weeks probably don’t share her “setup” love.

“From our point of view, 5 year time horizon, nothing has changed but the price.” Of course, on Wall Street changing prices is all that matters and everything leads from there, as Bill will probably explain to Cathie after a few more church meetings.

Ark Invest’s Cathie Wood says the pullback in tech stocks is not a cause for concern, and that her long-term bets will continue to move higher. “I love this set up.” https://t.co/EJXjv0CnpF pic.twitter.com/n67p8wpeqn

Wood also predicted a 25% to 30% compounded annual growth rate over the next five years. When asked about outflows, she said: “First of all, I don’t have to worry about redemptions. The ETF ecosystem is a beautiful thing for portfolio managers, I highly recommend it. The ETF ecosystem – they are facilitating our flows. And they are doing it many ways with algorithms and derivatives. We have experienced no problems. There has been hardly a disturbance in our spreads.”

Then, in a stunning revelation that had not been made public previously, Wood admitted that Hwang provided the seed capital for ARK: “So yes, he did provide the seed for our first four ETFs and we were very grateful to him.”

And Wood’s risk management – like Hwang’s – might eventually be called into question. In March, we also noted when ARK Funds filed to allow for larger concentrations in names, including overseas ADRs.

Investors have pulled $500 million from ARK’s flagship fund since the beginning of May. Could the rout continue? As we predicted yesterday…

naz will keep sliding until ark is archegoed