“Transitory” or not, Goldman’s global head of commodities research, Jeffrey Currie, told Bloomberg this week that “we’re in a new world,” and nowhere is that more evident than in the record-setting increase in the price of commodities across the globe.

From US/Canadian lumber to Chilean copper and Chinese Iron Ore, prices are soaring with Bloomberg’s Spot Commodity Index up a stunning 62% YoY – the fastest pace since January 1980. 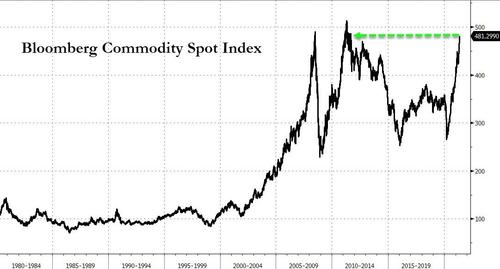 “The boom in commodity prices is good news for the materials or the cyclical sectors,” said  Rupert Thompson, chief investment officer at Kingswood Group in London.

“It cements the idea that you’ve got further rotation towards value and commodity sectors. But on the other hand, you’ve got the clear risk that it does exacerbate worries about inflation.”

And scratching below the surface, the drivers of this massive inflationary spike in underlying commodity costs looks anything but ‘transitory’:

For copper, the long-term outlook is also being bolstered by a likely surge in demand as governments target huge investments in renewables and electric-vehicle infrastructure. While copper’s last march to record highs in 2011 was driven by China’s economic boom, analysts expect this rally to be supported by a much broader rise in metals usage.

Steelmakers in the rest of the world, such as ArcelorMittal SA, are also enjoying a boom as demand bounces back from pandemic lows. “There is a chance that ex-China demand can come back to such an extent that we still see steel demand pick up globally and that will see iron ore demand remain at these elevated levels,” CBA’s Dhar said.

Many are optimistically hoping for a ‘Goldilocks’ scenario with restrained wage pressures enabling central bank dovishness amid a global boom, but judging by recent ISM/PMI surveys, management are expecting to (and are already) passing on cost increases to end-users. So while the “goldilocks” may work for markets, it is crushing to the middle- and lower-income classes… and doesn’t look set to slowdown anytime soon.

“There’s still quite a lot of room to go,” Evy Hambro, global head of thematic investing at BlackRock Inc., said on Bloomberg Television.

“What we’re really doing is we’re testing the upper ranges of commodity markets to work out what the new price range is going to be.”

Finally, we note that the last time commodity price inflation was this hot, 10Y Treasury yields were over 13%, and if you’re banking on The Fed’s “all-knowing” eye to “monitor” this “transitory” event, DoubleLine’s Jeff Gundlach has some sage words of advice.

“I’m not sure why they think they know it’s transitory… how do they know that?”

“it’s not clear to me that inflation is going to go back down to around 2 to 2.5%… we don’t know, nobody knows… but we’re most concerned with the fact that The Fed thinks they know.“

Because their track-record is not so hot…

“when I go back to the global financial crisis, when we almost had a complete meltdown of the financial system, Ben Bernanke completely missed all of the problems that led to the crisis.”

Simply put, The Fed is “trying to paint the picture” of control, but as Gundlach makes clear: “they’re guessing.”

Do you feel lucky?