Redditors Were Right; Chipotle Increases Wages To Average $15 Per Hour

Redditors Were Right; Chipotle Increases Wages To Average $15 Per Hour

Update (0905 ET): Redditors on Chipotle Mexican Grill r/ Chipotle were absolutely right over the weekend when current employees said, “there will be a big press conference on Monday.”

Chipotle announced it would increase restaurant wages on Monday morning, resulting in a $15 average hourly wage by the end of June. The press release went on to say General Manager positions could earn as much as $100,000 per year.

Additional details of hourly and salaried restaurant employees’ wage increases will be rolled out later this month. It said, “hourly crew member starting wages range from $11-$18 per hour.”

We noted Sunday, multiple Chipotle restaurants across the US were shuttered or working on limited hours as employees walked off the job over low pay. They’re taking advantage of stimulus checks via the Biden administration that pays more to sit at home than work. 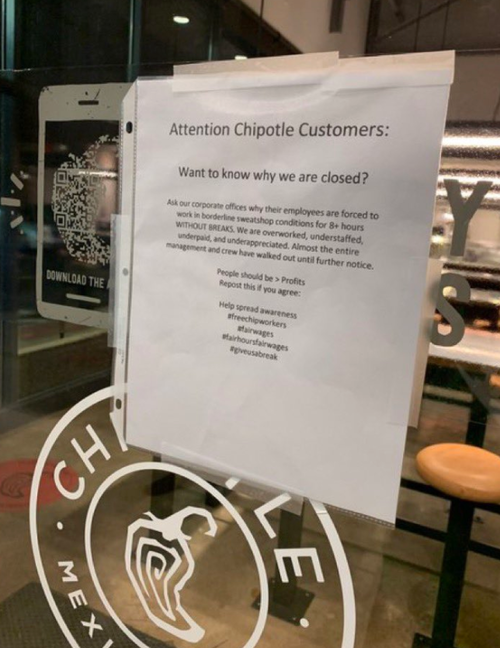 Chipotle’s announcement comes on the heels of fast-food workers across the country walking off the job in protest of low wages.

McDonald’s workers in 15 cities are expected to strike on May 19 ahead of the company’s annual shareholder meeting. Workers say they’re not being paid a fair wage.

That’s the theme in a Biden economy where sitting at home collecting government checks yields more money than working – forcing companies to raise wages that will ultimately increase product or service costs and be pushed to consumers. So much for the “transitory” inflation spike we see today – it’s something that will be sticking around for quite some time.

Thanks to the robust vaccine distribution and more and more states easing pandemic restrictions, on top of a labor shortage sparked by the Biden administration’s generous stimulus checks disincentivizing people to work while collecting free money from the government, restaurants large and small are grappling with a lack of workers.

“When it comes to recruiting workforce, in January, 7 percent of restaurant operators rated recruitment and retention of the workforce as their top challenge; by April, that number had risen to 57 percent,” Riehle told The Epoch Times.

“With fewer people in the workforce, the stimulus supports still in place, worker safety concerns, the need for caregivers to remain at home, and much greater competition with other industries for workers, operators are returning to pre-pandemic recruitment techniques for hiring,” he said.

The latest restaurant chain to experience a possible labor shortage is Chipotle. Unconfirmed reports on Chipotle Mexican Grill r/ Chipotle have cited moderators of the Reddit forum are deleting posts about an alleged conference call on Friday addressing pay raises set to be announced Monday. The plan is to increase the pay of workers to address the labor shortage.

“Just to let y’all know chipotle is warning everyone to take down posts about the new announcement or you can get fired, they’re doing a press release Monday and until then they want everyone quiet,” one Redditor said.

“We’re getting performance reviews and raises of up to two dollars,” a Redditor said.

The potential rise in wages comes as others on the social media platform reported, “some stores in California and Florida are not even opening, entire teams quit.” In a thread below, someone said, “my location in Ohio isn’t even open on mainline most days just because we’re short-staffed, not even because of covid.” 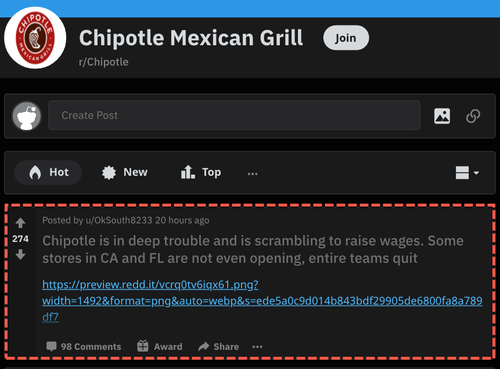 Another person said: “Same, and I’m also in SW Ohio, Cincinnati area. All stores around here are having a lot of issues getting new workers.” 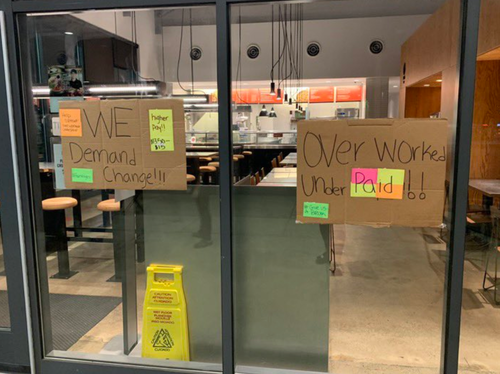 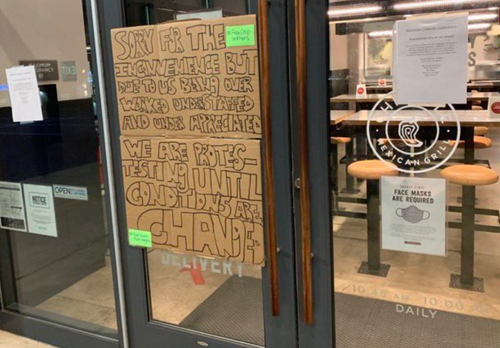 Someone else mentioned the Friday conference call: “We were just told in a conference call this morning about pay raises. Everyone is getting about 1-3 dollars more and starting rates for new hires; FOH will start at 15-15.50 and BOH will be 15.50-16 in Southern California. Apparently, there will be a big press conference on Monday.”

All of the comments above are from Reddit and are unconfirmed. Still, what people are saying (sounds like some are current and former employees) is that Chipotle is being forced to raise its wages to attract workers from the sidelines to squash a labor shortage that has materialized at stores across the country.

… and what does this all mean for patrons? Higher menu prices, of course, Chipotle will likely pass on the costs.

So much for that “transitory” inflation spike, Federal Reserve members keep squawking about… Maybe inflation is here to stay.