The Pivot To Gold Has Begun

The Pivot To Gold Has Begun

For the past few weeks I’ve incurred the wrath of what I’m now calling “Gold-Only” bugs for constantly haranguing them about bitcoin and cryptocurrencies. These are the folks which state only gold can beat the central banks. 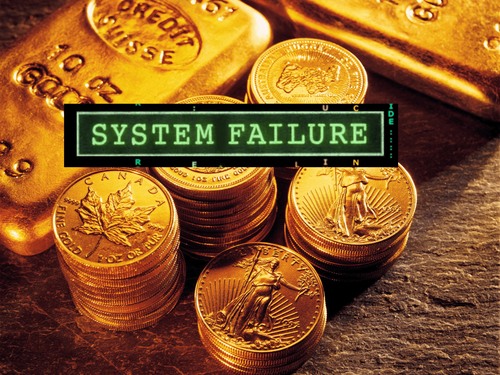 I’ve made my position very clear, in a world of digital money and accelerating technology there is room for both assets as stores-of-value for different types of investors and taking a ideological position for either is stupid as well as arrogant.

Like all things, there are reasons why putting all of your eggs in one basket in markets as cocked-up and purposefully manipulated as these is simply bad asset management. Risk is, ultimately, not someone else’s problem no matter how much Wall St. tries to convince of this otherwise.

Risk is your problem.

The gold and crypto communities have been at each other’s throats for months now, as bitcoin continued rallying off the Coronapocalypse low from last March while gold peaked in August and has ground out a truly demoralizing eight-month bear market.

The envy coming from Gold-Only bugs has them missing one of the great opportunities for wealth creation in anyone’s lifetime. You don’t have to love bitcoin to make money from it. Just like you can hate Facebook but own its stock and cash it in when it’s too expensive versus another asset, say… I don’t know? Gold?

But that inverse relationship is finally changing. Bitcoin and gold are getting back into phase. And it’s right on schedule.

Gold double-bottomed a few weeks ago in the $1670 area and since then a number of small announcements gave it some spine, mostly coming from China — allowing its commercial banks to import up to 150 tonnes of gold. That stabilized the price while at the same time Bitcoin has been building a new base between $48,000 and $64,000.

Consolidation is the word of the day. Both bullish but coming off of different recent trends.

Gold is the standard by which all store-of-value assets is judged. Those that make their living hanging on every word from the Fed are looking at their traditional cross-asset valuation models, seeing U.S. real interest rates rise and had no interest in bidding up gold.

To many of them this bitcoin thing isn’t a real market. Cryptos are a tulip bubble and no one serious takes it seriously. They rightly see the insane situation in Dogecoin and simply have zero frame of reference for what’s going on out there.

Humans are really good at a few things and one of them is rejecting outright something more than one standard deviation away from their previous experience. Dogecoin is something even us veteran crypto advocates look at and shake our heads.

For the past six months however, that perception has slowly changed as one big institution after another bows to bitcoin’s strength and the demand for it. On the best of days those of us in the crypto space have a hard time keeping up with the speed of adoption and the proliferation of new investment products, aspirational projects etc.

So I don’t blame these guys for looking at a sagging gold price and thinking the central banks still have things well in hand. They’ve been telling us inflation is tamed and the recovery is coming as we pull out of the lockdowns. Bitcoin may have been screaming otherwise, but gold wasn’t, so you go with what you know, right?

And then that narrative collapsed.

Today’s horrific jobs report finally revealed the reality behind the recovery narrative. 266,000 jobs. Not nearly 1 million. As Zerohedge points out, a 3.7 sigma miss.

Reality slapped everyone in the face. Gold spiked, bonds were bid. The dollar dumped and everyone is looking at the Fed going, WTF Powell?

The reason there is no jobs recovery is because the U.S. government, on the orders of The Davos Crowd are paying people to stay home. Why work when you can live rent-free in someone else’s house protected from eviction?

Why work when the government will pay you nearly as much to stay home?

This jobs report validates everything libertarians and Austrian economists have been saying about minimum wage laws for two generations and turned it into a cartoon. Moreover, this is happening while cost-push inflation for real goods is running far ahead of whatever heuristically-adjusted nonsense they call the CPI says.

That’s been the “Gold-Only” Bug’s argument and it’s also the Bitcoiners’ argument.

I’ve said this before, it’s a GIGO economy. Garbage in equals garbage out until you finally stop believing the garbage isn’t foie gras. Look up Rene Girard’s Memetic Collapse and you may finally realize who important today’s jobs report was.

And because of that all of a sudden those guys who thought real yields were somehow positive are now radically revising their models based on real world data which says the exact opposite. As such, gold has quickly left $1800 in the rearview mirror and should now be one its way back to the August all-time high. 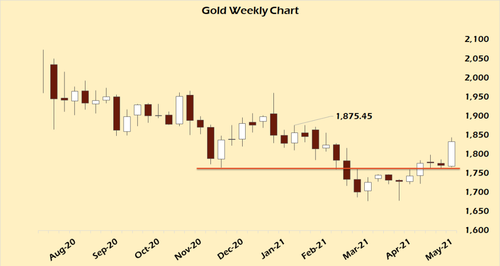 Today there is now the slowly dawning realization by so many big name money managers that both the Gold Bugs and the Bitcoiners may have been right all along. Gold and bitcoin are the safe havens from central banks and government operatives hell bent on changing the rules of the economy completely.

They are now coming out and complaining about stimulus and support screwing up the labor market. Job openings are at record levels while the Biden administration continues trying to keep everyone at home rather than go back to work.

A moment of silence for The Onion, please https://t.co/FzgHXEhsN7

This is The Davos Crowd’s Great Reset in real terms. This was all part of the plan, folks. Supply chains of basic goods and services are breaking down all over the place and still these people want to keep us locked in our homes until we all get their DNA-altering jabs against COVID-19 which we’re still supposed to be scared of.

That narrative is used to justify, in effect, Universal Basic Income and the destruction of risk capital as an asset class. Let’s just give everyone new digits without backing and send them out to buy another two-liter of Woke-a-Cola Classic, order a cardboard pizza, Netflix and chill.

While denying the reality that in places where there are no mask mandates and no lockdowns the COVID-19 numbers are irrelevant. At this point we are trying to tease signal out of noise. Every day more and more people are tired of it while the corporations who were promised a rose garden by Klaus Schwab continue to try to force everyone to accept masks, social distancing and vaccine passports as the New Normal.

But that New Normal is quickly morphing from The Great Reset to the Great Reject as the revolt against this, frankly, adolescent view of humanity is fought by enough people to ensure its abject failure from here out.

We live in a narrative-driven world created by half-truths and outright lies. The “Gold-Only” Bugs have things mostly right, their desire for the world to get back to things that are ‘real.’ I get it and share it with them. As I said in a recent post, however, reality isn’t only that which was but also incorporates what is and what will be.

In fact, that’s the whole purpose of human endeavor, to turn today’s dreams into tomorrow’s reality. It doesn’t matter which tools we use to get us there, only that we use the right tool for the right task at the right time. Gold’s Achilles’ heel has always been its lack of yield which allowed the central planners to destroy its ability to keep its network of users from collapsing. Once that was achieved divorcing the derivatives, national currencies, from it was child’s play.

Today bitcoin is assisting gold find its place back into the world’s monetary system. It’s helping accelerate the realization by a critical mass of people that those in charge hate us, and only want us around if we kowtow to them as digital serfs in a dying world. They believe they can leave us behind by walling us off the gifts of their world.

But those gifts are shackles, of the mind, body and spirit.

Meanwhile the “Gold Only” Bugs are still hunkered down while the Bitcoiners and those with a foot in both camps are building new alternatives to the digital serfdom of The Davos Crowd.

Returning to a world of real ownership and custody begets a world of responsibility and discipline. Bitcoin and cryptocurrencies have, like all other technologies, the capacity to become corrupted and that’s why gold should always be there to keep us in line.

As The Great Reset unravels and the central banks’ fail to outcompete bitcoin and cryptos, there will come a day where today’s gold reserves, which they control, become the last line of defense for governments intent on maintaining control. And that’s when things really get interesting.

Join my Patreon if you love gold and bitcoin