Just hours after we wrote an article titled “ARKegos Looming” on Thursday, which compared ARK Invest’s Cathie Wood to Bill Hwang and started to ask some critical, pointed questions about how many times ARK can closely sheer the NASDAQ sheep from which it is making its living, the firm’s matriarch appeared on CNBC late on Friday for some urgent damage control an interview about the recent performance of her funds. Her flagship ARKK fund is now down about 31% off its 52 week and all time highs near $151 per share.

During Wood’s CNBC interview on Friday, she admitted on national television what we had been reporting weeks ago: that Bill Hwang was a backer of ARK Funds. Responding to a question about the Bloomberg report that first called her relationship with Hwang into question, Wood told CNBC: “I know Bill Hwang. I met him through church, we were both advisors to the Financial Services Ministry. That was in 2013. And on our way back from that event, we were exchanging stock ideas back then.”

Wood talked about how Hwang was interested in Netflix, one of the first names they discussed. “He hadn’t been involved at all in U.S. stocks, so he was very interested. We chatted a bit about media generally in the U.S.,” Wood said. Notably, media names like Viacom and Discovery were key parts of Hwang’s portfolio that were liquidated after it blew up.

Then, in a stunning revelation that had not been made public previously, Wood admitted that Hwang provided the seed capital for ARK: “So yes, he did provide the seed for our first four ETFs and we were very grateful to him.”

“Bill was very intrigued with the stocks we were interested in, he was just beginning to learn about them” she continued. When asked about whether or not she had spoken to Hwang after his blow up, Wood said: “I have not spoken to him. I send him a note after the unfortunate events we witnessed.”

When asked if Hwang still had a position in any ARK funds, Wood replied: “To be honest, I have no idea. I never asked him if he kept the money in. We’ve never had that conversation.”

When asked about the volatility in her names, notable in her innovation fund, Wood showed no caution whatsoever. “Oh, I love this setup,” she told a bemused Wilfred Frost, although her shareholders who are down 30% in a few weeks probably don’t share her “setup” love.

“From our point of view, 5 year time horizon, nothing has changed but the price.” Of course, on Wall Street changing prices is all that matters and everything leads from there, as Bill will probably explain to Cathie after a few more church meetings.

Ark Invest’s Cathie Wood says the pullback in tech stocks is not a cause for concern, and that her long-term bets will continue to move higher. “I love this set up.” https://t.co/EJXjv0CnpF pic.twitter.com/n67p8wpeqn

She also predicted a 25% to 30% compounded annual growth rate over the next five years. When asked about outflows, she said: “First of all, I don’t have to worry about redemptions. The ETF ecosystem is a beautiful thing for portfolio managers, I highly recommend it. The ETF ecosystem – they are facilitating our flows. And they are doing it many ways with algorithms and derivatives. We have experienced no problems. There has been hardly a disturbance in our spreads.”

The admission of being so close to Bill Hwang drew some attention from FinTwit, who couldn’t help but speculate…

This has gotta be the icing on the cake. @CathieDWood admits doing business with Bill Hwang.

Truth is stranger than fiction.

This market cycle will be an incredible movie. https://t.co/4mael5u5Tb

This strongly suggests the possibility that Cathie Wood’s “genius” is based upon Archegos buying out-of-the-money call options—using prime brokers as a front—on stocks in which Hwang was secretly but directly invested thanks to his seed funding of ARK. https://t.co/IZdXKN6mdD

What’s next for ARK?

Meanwhile, as we noted late last week, ARKK is “in the midst of its worst stretch since 2018”, according to Bloomberg, as the NASDAQ teeters back and forth, trying to decide how to react to what appears to be the end of an 18 month gamma squeeze, coupled with the widely accepted consensus that significant inflation is on its way.

As one trader simply noted…

This is beyond ugly – $ARKK pic.twitter.com/PqBoY5g6cG

ARKK’s plunge appears to mark the decoupling between real rates and riskier tech names. As real rates fell over the last week, NASDAQ names have not responded in the manner with which they had over the last 18 months (but for Friday), where stooping real rates would put a bid under risky names.

The change could be due to rising concerns about inflation. Matt Miskin, co-chief investment strategist at John Hancock Investment Management, told Bloomberg: “Even though the bond market is suggesting that tech should be doing better, commodities are what the equity market is listening to and that is causing less of a bid for technology. Commodities are whispering in the ear of the equity market and saying inflation is coming.”

This has also led to $785 million in outflows for ARKK over the last 6 days, according to Bloomberg. Hedge funds, during the same time, have cut their exposure to technology to the lowest since December, the report notes.

Dan Suzuki, Richard Bernstein Advisors LLC’s deputy chief investment officer, said: “With the data continuing to suggest a faster than expected recovery, the recovery/reflation trade is winning and expensive growth becomes a source of funds. The rising inflation expectations indicate that people’s confidence in the reflation trade is picking up.”

And we literally just noted – days ago – that prime brokers had begun to slash leverage as a result of the Archegos blowup. As momentum charged higher last year, riding a sea of liquidity, every stock market ‘guru’ bought the junkiest junk… 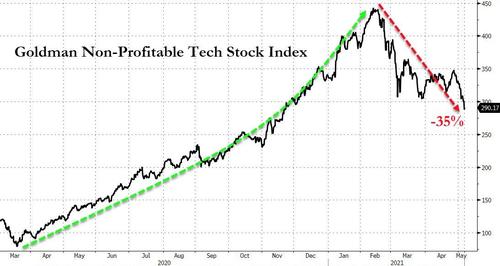 …with the most leverage. 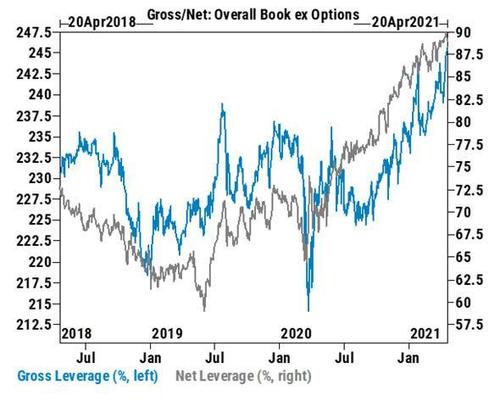 As a result, hedge fund leverage – both gross and net – hit record highs in late April, according to Goldman’s Prime Brokerage. And that has now prompted prime brokers to slash available leverage for their hedge fund clients:

…managers of small hedge funds who lack the negotiating clout of trading whales are grousing. For the little guy especially, the saga will make it harder to borrow money from banks to finance bets.

While specific measures will vary by bank and client – and in many cases are still being ironed out – the talks and tensions point to greater pressure on clients to reveal their biggest wagers, stricter margin limits on those positions, more frequent collateral adjustments and more rigorous audits. The deliberations were described by executives close to prime brokerage desks and money managers.

At its most extreme, Credit Suisse, which was the hardest hit among Archegos’ primes, drastically adjusted risk tolerances and practices, slashing lending to hedge funds by a third.

And so the analogues to Bill Hwang continue to be tough to not notice. In April, we pointed out the tie between Hwang, who had recently blown up, and Wood, noting that Wood could also be on the precipice of her own “Jesus Take The Wheel” style moment. We knew at the time that Bill Hwang was a mentor to Cathie Wood and that both investors had a penchant for bringing religion into their investing methodology, as we noted in a report we published earlier in April.

In that report, we shone light as to how close Wood and Hwang were in the investing world. A Bloomberg report released in April said Hwang was “on the same trajectory” as Wood. For example, in 2016, Hwang was invited to a weekend retreat put on by Princeton Theological Seminary that was set up to “connect Christians in finance”. The Saturday keynote dinner that weekend featured Wood, who was then a startup manager and and an adviser to the ministry.

After then, Hwang became an investor in Wood’s firms, and “Archegos and ARK collaborated on industry research,” the report noted. Hwang was/is “a backer” of Wood’s. Wood, like Hwang, holds Bible study meetings in her office.

And Wood’s risk management – like Hwang’s – might eventually be called into question. About a month prior, in March, we also noted when ARK Funds filed to allow for larger concentrations in names, including overseas ADRs.

ARK funds filed an amendment to its prospectuses for its ETFs in March, making some little recognized changes that were caught by @syouth1 on Twitter at the time.

First screencap shows language that was removed re ownership of ADRs, warrants, etc. (in red). Second shows language removed re limits on investing 30%+ of assets in a single firm and investing in 20+% of firm’s shares (also encircled in red). Source: https://t.co/yDVAHJTf6Y pic.twitter.com/ZJUlRSxQ5n

As the tweet noted, the ARK SEC filing did several things. First, on a perfunctory note, it specified risks related to investing in SPACs, noting that they are “subject to a variety of risks beyond those associated with other equity securities”.

But then the filing got very interesting – language was removed that allowed ARK funds to take even larger concentrations in names – in addition to over-the-counter traded ADRs, which are notoriously riskier products than normal equity.

The amendment removed ARK’s limit to invest 10% of its total assets in any active fund in ADRs that are traded over-the-counter.

The amended prospectus also removed language that formerly limited ARK to investing no more than 30% of a fund’s total assets into securities issued by a single company.

Another “rule” removed was language preventing ARK from investing in more than 20% of a company’s total outstanding shares.

The amendments portended ARK piling further into concentrated, high-risk names that dominated their respective funds, we noted at the time. And now, the time to pay the piper may have finally arrived. As we wrote in April:

Obviously, if a pin is finally going to prick the NASDAQ gamma bubble that has blown up over the last 12 months, the higher Wood’s concentration in speculative names, the more spectacular a crash would be for ARK funds.

Will ARKegos be the next Archegos?