With expectations of today’s payroll print soaring, consensus expecting a whopping 1 million number and some forecasters calling as high as 2+ million, few were prepared for a miss (just 2 forecasters out of 79 were calling for a sub 800,000 print). And of course the market gods made sure to inflict the most possible pain on as many as possible, with the BLS reporting an April payroll of just 266K in April, a huge miss compared to the 1 million consensus estimate. 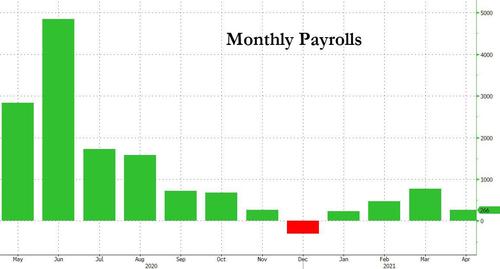 The miss was a 3.7 sigma miss to expectations….

… and the second biggest miss in history. 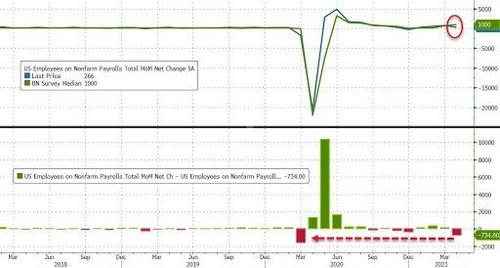 Commenting on the data, Bloomberg notes that the payroll data was “literally shocking” with the headline job growth of just 266k, an unemployment rate of 6.1%, and earnings growth of 0.7%” all speaking to a lack of low-skilled job additions.” The figure was particularly weak given the revisions of -78k over the past couple of months.

Meanwhile, employment for those without a college education was still 8.3% below pre-pandemic levels in April versus 9% in March. 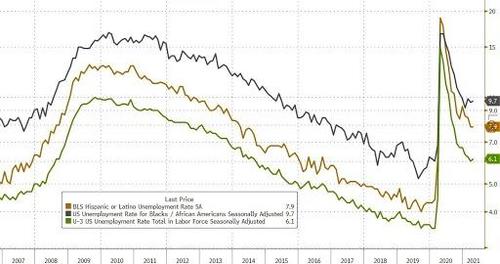 As Bloomberg notes, looking at the demographic cross-tabs by race and ethnicity and gender in the household survey, Hispanic or Latino men now claim the smallest employment shortfall, with total employment for that group 4.6% below pre-pandemic levels. Black or African American women still claim the largest shortfall, with employment 7.7% below pre-pandemic levels. But they were also the biggest gainers in April versus March levels. 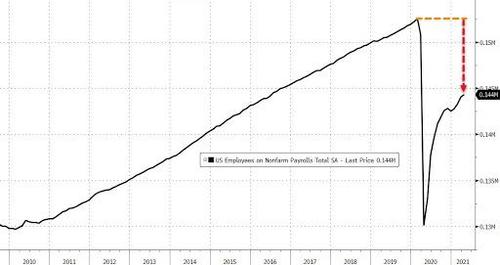 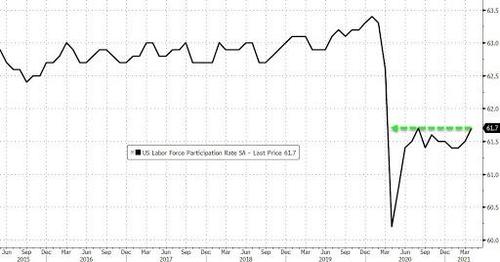 Another disappointment, if paradoxical, is that while the street was preparing for the first ever annual decline in hourly wages, the print was actually +0.3%, as fewer lower paying jobs were added. The average hourly earnings for all employees on private nonfarm payrolls increased by 21 cents to $30.17, following a decline of 4 cents in the prior month. In April, average hourly earnings for private-sector production and nonsupervisory employees rose by 20 cents to $25.45. 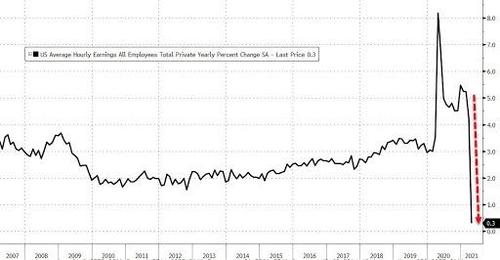 Not helping the hourly earnings print was an increase in the actual number of hours worked: the average workweek for all employees on private nonfarm payrolls increased by 0.1 hour to 35.0 hours in April. In manufacturing, the workweek and overtime were both unchanged over the month, at 40.5 hours and 3.2 hours, respectively. The average workweek for production and nonsupervisory employees on private nonfarm payrolls was unchanged at 34.4 hours.

Broken down by sector, in April, notable job gains in leisure and hospitality, other services, and local government education were partially offset by losses in temporary help services and in couriers and messengers.

To summarize: there was not nearly enough jobs as employers can’t find workers who opt for government stimulus instead; and the poor jobs number ensures that even more stimulus will be handed out, ad inf.

According to Minneapolis Fed president Neel Kashkari, there are people who are holding off re-entering the job market as they take unemployment benefits — thinking the market will be even stronger in a few months when those payments run out.

“We know that dynamic is there. We also know there are massive childcare shortages that are holding back families from re-entering the workforce. That’s disproportionately affecting women. And there are still a lot of people nervous about the virus.”

That said, Kashkari also said that most of those factors holding people back from re-entering the workforce “should work themselves out” over the next few months if vaccinations continue.

And of course, it wouldn’t be Kashkari if he didn’t explain that today’s dismal jobs report is just what the Fed wanted:

“For all those people who’ve been saying, ‘Oh my gosh, the Fed needs to normalize quantitative easing,’ today’s jobs report is just an example of, we have a long way to go, and let’s not prematurely declare victory.”

Curiously, the White House had already planned a high-level response to this report. Joe Biden is meeting with his economic team and Treasury Secretary Janet Yellen will be attending the White House press briefing later today. It will be interesting to see how Biden spins this huge disappointment, which if nothing else, will allow the Fed to avoid taper talk for at least a few more months.

As for markets, the initial reaction is that bad news is good news, with tech stocks soaring as the short squeeze we warned about yesterday is in full force.