April Payrolls Preview: It Will Be A Blowout Number But Will It Be “Too Blowout”

April Payrolls Preview: It Will Be A Blowout Number But Will It Be “Too Blowout”

What follows is our traditional payrolls preview post which looks at how Wall Street has established its latest consensus for the April print, but ahead of tomorrow’s jobs report – which could indeed be rather consequential if it is a significant outlier – the only question is what number would scare investors, one which we answered yesterday when we quoted Std Chartered’s Steven Englander who said that 2 million+ April job additions are needed for investors to see risk that the Fed changes its stance; Meanwhile, the widely expected whisper range of 1.0-1.5 million jobs “may not be enough for the Fed to shift, even if jobs exceed the 1mn consensus.”

Of course there is also the risk of a downside surprise: only 2 of 79 forecasts are below 800,000, so the consensus of 1 million could generate a modest bond rally and 650,000 or lower, quite a move down. Given the volatility of labor-market data, such a print might not extinguish optimism, but it would raise the possibility that the market is wrong in its hawkishness and the Fed is right in its dovish stance.

With that in mind, here is what Wall Street expects tomorrow, courtesy of Newsquawk:

Summary: Fed officials want to see a “string” of strong jobs reports before they begin the conversation on when to taper asset purchases. While the exact meaning of “string” is yet to be explicitly defined, one would assume that this entails a consecutive run of quite a few solid jobs reports since there are, after all, almost 8.5 mln Americans that remain out of work compared to the pre-pandemic period, as officials remind us frequently. Accordingly, analysts say that in the months ahead, insight on how the economy is eroding slack may be better evidenced in the participation rate, employment/population ratio, and underemployment rate metrics, rather than the headline unemployment rate. On price pressures, the Fed has warned us that inflation is expected to run above target in the near-term, due to pandemic base effects, crude prices, and some pent-up demand; however, this is not expected to be seen in the average hourly earnings metrics in April, which may in fact tilt negative; recall, this time last year, the wages measures actually rose as lower-paid employees fell out of the survey sample – this dynamic is expected to reverse as lower-paid Americans return. Labor market proxies have generally had a constructive tilt: initial jobless claims and continuing claims data fell in the survey window; business surveys were mixed, but noted tightening labor market conditions and challenges in attracting staff; ADP payrolls fell short of expectations, but still showed healthy gains, and has tended to underreport the NFP data in recent months; announced job cuts have declined significantly.

Payrolls: While consensus expects a 1 million print (with a handful of forecasts as high as 2 million or just above), Goldman believes that tomorrow’s number will be 1.3 million as mass vaccinations and the easing of business restrictions supported rapid job growth in virus-sensitive industries, including leisure and hospitality, retail, and education (public and private). Additionally, Big Data signals generally indicate job gains of 1mn or more in the month.

Unemployment Rate: The Fed has signaled that it will continue purchases of Treasuries and mortgage bonds at a rate of $120bln/month until “substantial further progress” has been made toward its maximum-employment and price stability goals. Officials have also been cautious in using the unemployment rate as a proxy for the level of slack in the economy, with many suggesting that the ‘real’ rate of joblessness is closer to the 10.0% mark, rather than the 6.0% headline unemployment rate. Accordingly, the focus will likely be on the U6 measure of “underemployment” (which stood at 10.7% in March), and the participation metrics; the latter is becoming increasingly important to judge the progress of slack erosion, and may offer better insight than the headline unemployment rate. In the March report, participation rose by one-tenth of a percent point to 61.5%, still off the 63.2% pre-pandemic level seen in February 2020. It is also worth paying attention to the little-reported Employment/Population ratio, which some Fed officials have recently referenced; that ratio stood at 57.8% in March, still 3.3ppts beneath the pre-pandemic level of 61.1%.

Average Hourly Earnings: Some warn that the Y/Y metrics may be dragged into negative territory in April. Recall, a year ago, as the pandemic began to bite and economies were shuttered, lower-wage workers were the first to be benched, and fell out of the data sample; this artificially buoyed the earnings metrics (pushing them higher), and the unwinding of this effect is expected to exert influence this month. The consensus therefore expects the Y/Y average hourly earnings measure to be negative for the first time on record. However, some desks are hopeful that not only will this return to positive territory quickly, but also that wages could begin rising as many surveys have alluded to: the Fed’s April Beige book noted that wages increased further over the reporting period, with employers in sectors that reported difficulties in attracting and retaining workers also highlighting tight wage competition, especially for hourly workers; the report also cited some employers lifting salaries in order to attract more workers (it points out that the ability to attract and hire employees varied considerably among contacts, depending on the industry).

ADP Payrolls: ADP payrolls disappointed expectations, printing 742k against an expected 800k; some made the point that this was better than was implied by the Homebase employment data, which tends to focus on smaller businesses, and suggests that big companies have been proactive in reopening e-forts. As always, caveat that ADP’s data has understated that of the official BLS numbers in recent months, so desks were not revising down their NFP forecasts in wake of the release.

Initial Jobless Claims: In the BLS survey period that coincides with the weekly unemployment claims data, initial jobless claims fell from 678.75k to 655.75k, while continuing claims declined from 3.71mln to 3.68mln, boding well for the April BLS data.

Business Surveys: The ISM surveys gave a mixed assessment of the labor market, with the Employment subindex falling 4.5 points in the manufacturing report, to 55.1, remaining in expansion for the fifth consecutive month; however, panelists continued to note significant difficulties in attracting and retaining labor at their companies’ and suppliers’ facilities. The employment sub-index in the services report saw a rise of 1.6 points to 58.8, the fourth straight month in expansion, and the highest level since September 2018. The services report also noted the competition for labor as more restaurants began easing restrictions and returning to normal levels of activity, and all levels of the business were increasing personnel.

Challenger Job Cuts: Challenger reported that job cut announcements fell from 30,603 in March to 22,913 in April, the lowest monthly figure since June 2000, and -96.6% Y/Y. Challenger said that, so far this year, employers have announced plans to cut 167,599 jobs from their payrolls, down 84% from the 1,017,812 jobs eliminated through the same period last year. The report said that employers were no longer undergoing massive cuts, and consumers were beginning to feel safe traveling and spending, and the number of job openings is edging higher. However, the report also noted a labor shortage despite the millions of Americans remaining out of work. Challenger added that the ongoing impact of increased vaccinations and the American Rescue Plan will be reflected in the April job numbers, with a likely decline in both the unemployment rate and weekly initial jobless claims and an increase in job openings.

Arguing for a better-than-expected report: 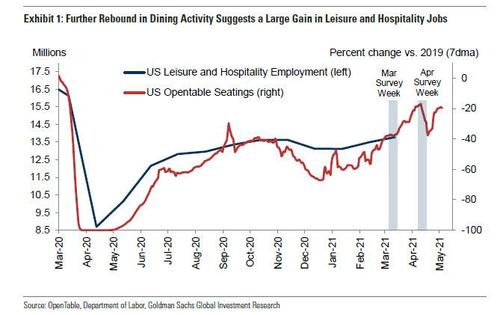 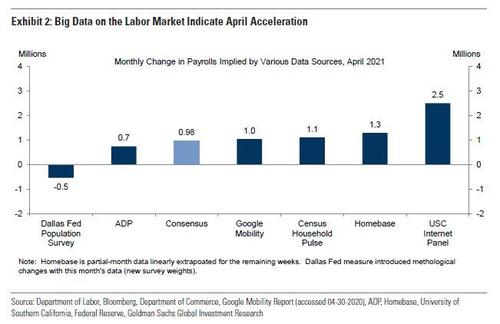 Market Reaction: Observing the handful of data releases seen in the month of May, Rabobank’s analysts note that yields rose in wake of a weak ADP report, which might indicate a shift in the market reaction function that we have been accustomed to in recent months; now, weak data is providing a negative impulse for bonds, which Rabo says is a function of the market interpreting that the bad data implies centrist Democrat lawmakers would be less likely to try and water down President Biden’s stimulus plans (while resistance is more likely to rise if the data tone improves, which would reduce the need for any bumper fiscal spending). Rabo also notes that Eurodollar futures’ reaction supported the ‘bad news is bad news’ playbook, with the rationale being that, as the market assigns a greater probability to fiscal stimulus, it must therefore give a greater chance that the Fed will scale back its support too.