After a deal over fishing rights became a major sticking point that almost scuttled a Brexit trade deal between the UK and EU, France and the UK are already feuding over fishing licenses that are supposed to be approved by the UK-dominated island of Jersey, which is facing threats of having its electricity cut off by France if it doesn’t stop stalling on issuing fishing licenses to French ships.

Brussels has already backed France and accused the UK of breaking the newly ratified deal in dispute over Jersey fishing licenses.

Alarmed by France’s threats and a mass of fishing ships arriving in its harbor setting off red flares in protest, the Royal Navy has sent two ships that have just arrived in the island’s waters. PM Boris Johnson, who was reportedly only made aware of the conflict this week, says he stands behind the island of Jersey, which is a protectorate of the British Crown. 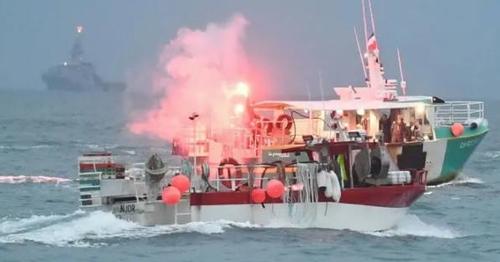 French fishermen and ministers have been complaining for two weeks about the difficulty of gaining access to British waters despite the agreement on fisheries reached at the end of last year. Apparently, the British applied new conditions to fisheries applications requiring fishermen to prove via GPS that they have been fishing in Jersey waters, the FT reports.

Small boat owners argue that they do not have GPS technology and the other electronic surveillance equipment required. Other special conditions attached to the licenses relate to the fishing gear itself. The EU-UK trade deal allows the UK to impose new requirements, but they must be based on “clear scientific rationale”. In this case, there doesn’t appear to be any rationale for its demands.

France’s warning followed claims from Paris that Jersey was stalling in issuing licenses to French fishing boats under the terms of the trade deal. The agreement provides for retaliatory measures to be taken. And Brussels has bolstered France’s claims, with the European Commission having “indicated to the UK” that the provisions of the trade deal “have not been met…have not been respected”. France supplies 95% of the island’s electricity via undersea cables.

Following the French threats to cut off the island’s electricity supply, two Royal Navy ships, the HMS Tamar and HMS Severn, have been sent to patrol the crowded waters off Jersey to ensure that French “protests” remain peaceful. France also deployed two vessels of its own along the maritime boundary between French and Jersey waters. According to reports from Bloomberg, French fishing boats have started to leave Jersey waters as the protest winds down.

A French boat has been spotted ramming a British vessel in Jersey waters.

While Brussels backs France, Lord Daniel Hannan, a former conservative MEP and member of the UK Board of Trade, accused French President Emmanuel Macron of behaving more like an autocrat than a diplomat with his aggressive threats to cut electricity to Jersey. All of this, Hannan complained, is part of a disturbing trend of “dictatorial behavior” exhibited by President Macron.

Here’s more from the Daily Mail:

These days, France is supposed to be a Nato ally. Yet here it is threatening the sort of sanctions that might be more aptly deployed against an enemy, such as North Korea.

Part of the explanation might lie in Emmanuel Macron’s increasingly dictatorial behaviour. It is extraordinary to think that the French president was once hailed as a liberal centrist.

During the recent row over vaccines, for example, he made the kinds of statements that get anti-vaxxers banned from social media, claiming that the Oxford-AstraZeneca vaccine was ineffective, but simultaneously demanding legal action to get more of it.

His grandiose gestures — yesterday, he laid a wreath at the tomb of Napoleon, who destroyed the French republic with a putsch then plunged Europe into a series of disastrous wars — suggest autocracy rather than moderation.

Perhaps he is worried about the rise of Marine Le Pen, who is catching up with him in the polls. Last week, the leader of the National Rally endorsed a letter written by 20 retired generals that hinted at a military intervention to prevent France sliding into chaos — a letter backed, according to the polls, by 58 per cent of French voters.

Perhaps Macron wants to burnish his nationalist credentials. Perhaps he calculates that bashing the Brits (in the eyes of most French voters, Jerseymen count as Brits) plays well with the home crowd. Or perhaps he sees himself as another Bonaparte, leading France to glory.

Whatever the explanation, he plainly likes to exaggerate his quarrels with the UK, not least over fisheries.

Under the terms of the trade deal, should the dispute persist, the EU side could request the formation of an arbitration panel to review the situation and make a ruling. If that ruling isn’t followed, it could petition for sanctions.