Central Banks Armada On Deck: A Look At The Coming Busy Week

Central Banks Armada On Deck: A Look At The Coming Busy Week

We start our week ahead preview with the main event of the week: the FOMC on Wednesday, and the ensuing press conference from Chair Powell, which according to DB’s Jim Reid will dictate where yields and risk trade for days, if not weeks ahead.

In their preview, DB’s US economists highlight that the Committee is likely to update their economic projections with a substantial upward revision to expected growth, a lower unemployment forecasts, and a modestly higher inflation trajectory following the passage of President Biden’s $1.9tn Covid19 relief package. Despite this, Chair Powell is likely to emphasize that significant uncertainties remain and that the recovery has a long way to go, particularly the labor market. Powell is also likely to reiterate that any discussion of tapering is “premature” and that it will likely be “some time” before the Committee can even assess if their goals have been achieved. On the topic of rising yields – US 10yr yields are up around 60bps since the last FOMC meeting in late January – he will likely once again emphasize that the Fed has the tools to deal with issues as they arise and that they would respond to disruptive or persistent tightening of financial conditions as necessary. It’s fair to say it’s a pivotal meeting though.

Meanwhile in the UK, the Bank of England will present their policy decision on Thursday, and much like with the Fed this week and the ECB last week much of the focus will be on how the BOE interprets the recent sharp rise in yields. They are likely to try and strike a similar balance between the market pricing in an improving outlook and not wanting financial conditions to tighten excessively. The market is not expecting a change to either the policy rate or asset purchases.

The final major central bank decision comes from the Bank of Japan on Friday, where economists believe it will adjust its present policy framework after the release of the results of its ongoing policy assessment. They see the meeting as more unpredictable following Governor Kuroda’s comments on 5 March, but they believe the bank will consider more effective equity ETF purchasing along with measures to alleviate the adverse side effects of its negative interest rate policy.

The week will also see monetary policy decisions from the central banks of Russia, Brazil, Norway and Turkey. Russia is set to keep rates steady, but could hint at tightening financial conditions. On the other hand, Brazil is expected to start a tightening cycle.

On the economic front, attention will fall on retail sales, industrial production, housing data, CPI inflation across the Euro area and Canada. In Emerging Markets, there. 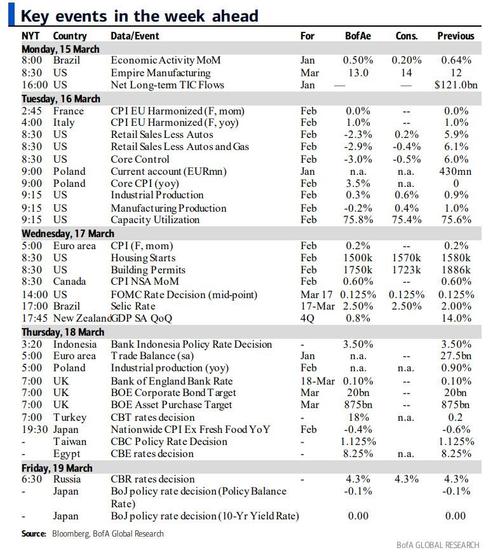 Courtesy of DB here is a day by day preview of the coming week:

Finally, as Goldman notes, the key economic data release this week is the retail sales report on Tuesday. The March FOMC meeting is this week, with the release of the statement at 2:00 PM ET on Wednesday, followed by Chair Powell’s press conference at 2:30 PM. There are no other major speaking engagements from Fed officials this week, reflecting the FOMC blackout period.