Small Business Guarantees Are A Bucket Of Moral Fraud

Small Business Guarantees Are A Bucket Of Moral Fraud

Authored by Mike Shedlock via MishTalk, 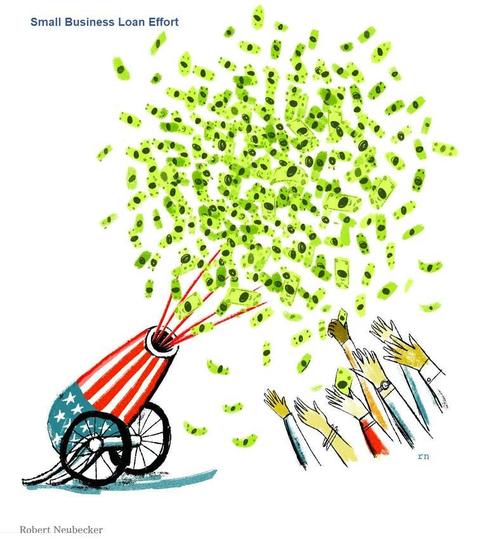 The Trump administration has approved roughly $100 billion of the $350 billion allocated for emergency loans to small businesses devastated by the coronavirus outbreak, Treasury Secretary Steven Mnuchin told lawmakers on Wednesday.

But the figure has done little to ease the rising fears of smaller businesses still struggling to access the funds — and growing ever-more concerned that the program is tilted in favor of larger enterprises with existing relationships with banks.

The concern from small businesses is simple: they fear the money will run out before they can access it.

“A lot of money [is] first-come, first-serve, and many unbanked people who are underbanked or unserved … don’t have banking relationships, sophisticated in a way that others do,” House Speaker Nancy Pelosi (D-Calif.) said Wednesday in an interview with NPR.

Let’s tap into that idea that money might run out with an investigation of the Small Business Loan Rules.

​The program offers loans of up to $10 million to cover eight weeks of payroll plus some additional expenses, like rent and utilities.

The loan can effectively turn into a grant. Most, and in some cases all, of the loan will be forgiven if a company uses the money to retain workers or hire back positions it had to cut. The S.B.A. has waived many of its usual requirements for these loans and will not require collateral for them.

Businesses can have their loans forgiven in full if they maintain their full-time equivalent head count (based on a 40-hour workweek) and wages for eight weeks after the loan is disbursed, the Treasury Department said. The agency said that “not more than 25 percent” of the forgiven amount may be used for nonpayroll costs, like rent.

Companies can borrow up to two months of their average monthly payroll costs for the past year, plus an additional 25 percent, up to $10 million. “Payroll costs” include salary, wages, tips, commissions, paid leave benefits, employer-paid health insurance premiums, and state and local payroll taxes.

The CARES Act text says that you can claim your “wage, commission, income, net earnings from self-employment or similar compensation,” up to $100,000 a year.

You’ll have two years to pay off the balance, at a 1 percent interest rate. No payments are due for the first six months after you get the loan.

Hooray I am Qualified!

Moreover, one does not even have to request an amount.

The S.B.A. will determine how much someone like me can borrow using a formula intended to approximate six months of my operating expenses.

This is despite the fact that I have not lost a penny in earnings.

Let that sink in.

I cannot find any requirement anywhere that prevents someone like me from making an outright bundle.

Nowhere does the application (that I am aware of) ask me if I have lost any income.

Even if it did, all I would have to do is stop paying myself salary, let the profits accumulate, and use the loan to cover my previous income.

Since the loan is used to pay salary, (my own), it would be forgiven. Heck, I could even hire my wife and kids except for the fact I have no kids.

On top of that, and despite the fact I have not lost a dime, I will receive an automatic check because the government is sending out blanket $1,000 checks to everyone.

You bet. I will not take advantage but under the rules I easily could.

From the Bank Perspective

Assume the banks are getting flooded with loan requests.

Who do they want to lend to?

Any reasonable credit scoring algorithm would direct these loans to the safest place, category number one.

Lesson of the Day

When government fires money out of cannons, it generally does not get into the hands that government intended.

The more cynical will believe it actually does get to the intended people, just not the alleged beneficiaries.