The benefits of having Tesla as part of the broader S&P 500: Now, all investors get to benefit from the random quirks of the world’s most unpredictable CEO (who just two years ago was accused by the SEC of securities fraud and got a wristslap for it).

Such may have been the case on Wednesday morning, when shortly after 10am, and with Bitcoin already under pressure after the morning cash open, Elon Musk decided to take to Twitter and inform the world that he had bought his toddler some Dogecoin.

Bought some Dogecoin for lil X, so he can be a toddler hodler

While unclear which tripped first, both Tesla shares and S&P 500 futures stumbled at the same time… 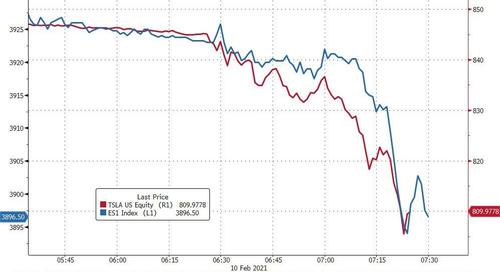 … with index futures erasing the gains for the day as someone dumped 120K Emini contracts amid a big 1000-name sell program. 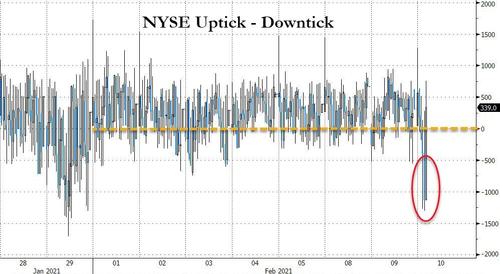 And while bitcoin was already weak on the day, Musk’s Tweet sent bitcoin down more than 10% pushing it to $44,000, lower by almost $4K on the session. Other cryptos all pulled back together. 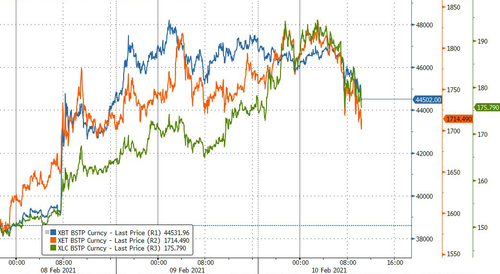 Of course, what actually sparked the selloff remains a mystery and could just as easily be Jerome Powell leaking a fake version of his 2pm speech with the text “June hike” casually added just to take some froth out of the market.

We feel for the RIA’s and financial advisors that have to explain today’s dip to clients they “conservatively” put into SPY index funds in order to diversify and place a safety net under their portfolio.

FNC’s Carlson: ‘The Troops Are in the Capital for Political Reasons — They’re There to Prop Up the Regime’

FNC’s Carlson: ‘The Troops Are in the Capital for Political Reasons — They’re There to Prop Up the Regime’