Manhattan’s high-end real estate market recorded an unseasonably strong performance last week (Feb. 1-7), with the largest amount of contracts for properties asking plus $4 million since November 2019, according to Mansion Global.

The latest market report from Olshan Realty shows 30 luxury home contracts were signed last week. Twenty-one of those were condo units, four were co-ops, and five were townhomes. 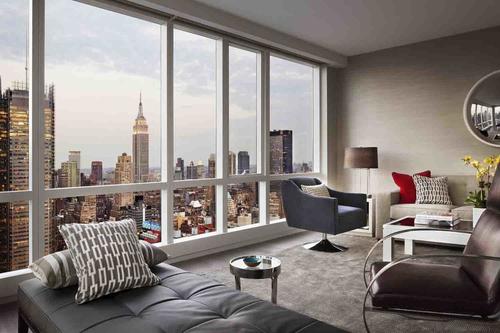 A surge in buying interest comes as developers and sellers have slashed luxury property prices following the virus pandemic. Even before the pandemic, around half of all new condo units built after 2015 were unsold. A lot of inventory still sits on the sidelines.

However, Donna Olshan, who tracks luxury sales, said last week’s report is “very optimistic because really what it’s showing is the consumer is out there and aggressively looking at New York as a place to buy and live.”

In the last two weeks, 57 contracts were signed, 48 of which were apartments. Of those, half were sold by developers. The totals in the previous two weeks “continued a trend that started after the November election—a cocktail stirred with ingredients ranging from the Covid-19 vaccine to low interest rates, a robust stock market and meaningful discounts,” Olshan continued. 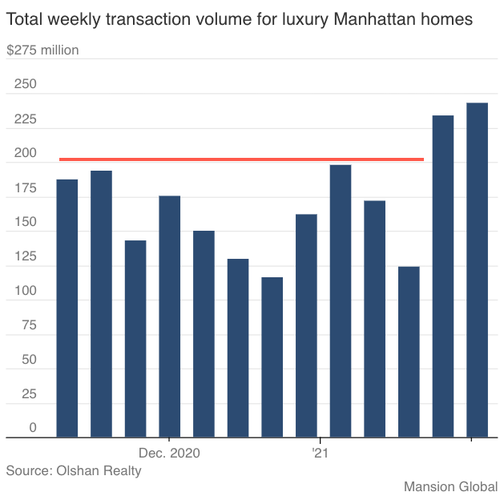 The priciest condo to find a buyer last week were the 10th and 11th floors at 1045 Madison Avenue on the Upper East Side, which sold for $27.95 million. The buyer plans to combine both floors into one unit with 8,386-square-foot duplex apartments.

The second priciest condo sold last week was at One57, a 75-story building located on Billionaires’ Row, for $19.9 million, reduced from $25.2 million.

Buyers remain in control of the market. Average asking prices for luxury properties fell 10% last week to the final price. Many of the homes took an astonishing 743 days to sell.

The surge in buying interest among luxury properties in Manhattan is only among the ultra-rich who can obtain cheap loans, unlike average folks who are still having trouble finding mortgages as bank lending standards remain tight.

PURE MARXISM: Prosecutor Argues Pro-Trump “Shaman” Jacob Chansley Should NOT Be Released Because He Might ‘Push False Claims of Election Fraud” Once Released

PURE MARXISM: Prosecutor Argues Pro-Trump “Shaman” Jacob Chansley Should NOT Be Released Because He Might ‘Push False Claims of Election Fraud” Once Released