On one hand China is desperate to tell the world that this time it is taking deleveraging of the world’s largest and most indebted financial system seriously. On the other hand, it is doing this: 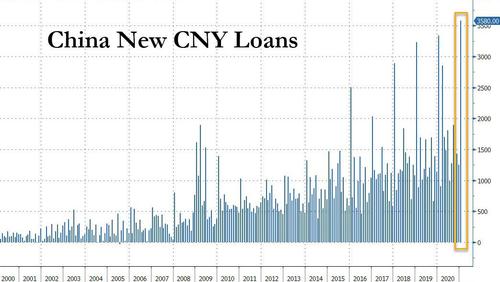 The chart shows that in January, China created a staggering, record 3.58 trillion in new yuan loans, a number which easily surpassed the previous record of 3.340 trillion set last January just as the Chinese economy shut down as a result of covid, when only gargantuan credit injections prevented a total economic collapse in the world’s 2nd largest economy. It’s almost as if only ever greater credit injections are keeping China alive. 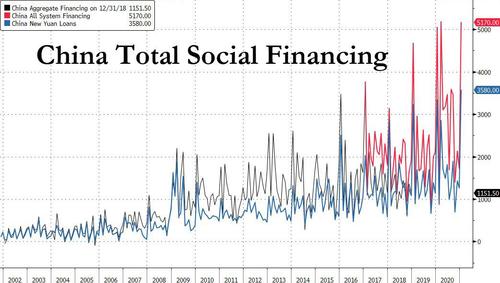 That’s right: in one month China injected roughly 6 months of QE into the economy. And to think of all the praise Stanley Druckenmiller heaped just a few days ago on China for its “fiscal sanity”.

Here are the details:

So yes, anyone who only looks at the M2 – like Druck – would be left with the impression that China is barely adding to the Chinese debt. That would be dead wrong as nothing could be further from the truth. 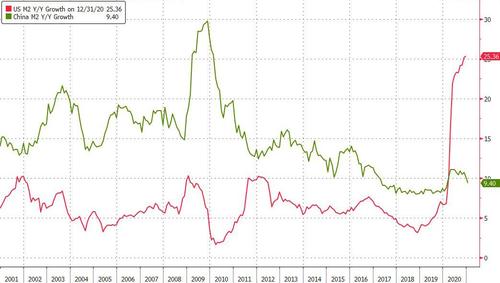 As Goldman summarizes, the sequential growth of total social financing soared in January from a significant slowdown in December, mainly on decent loans growth, less drag from shadow lending (especially a rebound in banks’ undiscounted acceptance bills), and recovery in corporate bond issuance. How to read this conflicting signal amid China’s overall posture of urgent deleveraging? Well, if one listens to how Goldman justified it, this is just a Golidlocks scenario – the garguantuan amount of debt could have been even more Gargantuan:

Overall, as suggested by the Q4 monetary policy report and December’s Central Economic Working Conference, the PBOC will avoid sharp tightening to jeopardize growth recovery, but will also likely avoid too dovish a policy to prevent risks (e.g., financial leverage).

There is another reason why China injected such a massive amount of debt in the economy: the real reason. Recall that interbank interest rates in late January soared leading to concerns that PBOC may tighten monetary policy. Well, it was up to Beijing to ease nerves and to demonstrate that while rates won’t be cut, China can easily inject trillions into its economy, if needed. 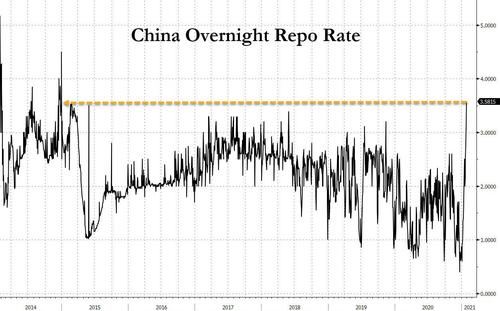 It was needed, because the PBOC scrambled to inject enough liquidity to unfreeze the repo market (even as it still pretended that it was tightening conditions as part of its deleveraging) and as Goldman elaborates “in a monetary policy framework with policy rates increasingly emphasized as an anchor for market rates (DR007 in particular), this is more like a normalization of market rates to the average levels (fluctuating around OMO rates) prior to the shock from bond defaults in November, and accordingly narrow the deviation of market rates from the policy rate (OMO rate).”

And while a decent liquidity injection from PBOC and significant decline in interbank interest rates in December and early January helped corporate bond issuance recovery, it had also led to significant rise in leveraging in bond market. So to make sure the credit markets were well greased, China had no option but to flood even more new loans.

Goldman’s conclusion is that “as suggested by the Q4 monetary policy report and December’s Central Economic Working Conference, the PBOC will avoid sharp tightening to jeopardize growth recovery, but will also likely avoid too dovish a policy to prevent risks (e.g., financial leverage).”

Yawn. What the credit data really means is that Beijing continues to engage in a giant magic trick with the rest of the world, one where it pretends to shrink its debt even as it injects record amount of debt at the same time.

And yes, massive credit injections are all that really matter because on Wednesday, Chinese bank stocks outperformed in Hong Kong “after financial institutions offered a record amount of new loans last month” Bloomberg reported adding that half of the 12 biggest gainers Wednesday morning in Hang Seng Index are lenders, led by Bank of Communications rising as much as 4.3% while major banks also rally in mainland trading.

In other words, such an amount of debt was not expected, and should not have been expected if indeed China was doing as well as Beijing has been claiming.

In short: Beijing continues to lie about everything.