Japanification On The Rocks: JGBs Slide In Longest Losing Streak Since 2003

Japanification On The Rocks: JGBs Slide In Longest Losing Streak Since 2003

Is Japan’s “Japanification” experiment about to suffer a major hiccup?

In a country where even the smallest rise in yield sparks alarms across Tokyo and the BOJ, things are suddenly looking dicey. On Tuesday, Japan’s benchmark 10-year government bond futures fell for a tenth consecutive session on Tuesday, their longest losing streak in 18 years, as local investors were spooked that some of the surging US inflation (according to 10Y breakevens, which are now at 7 year highs) is going to cross the Pacific.

Adding insult to injury, demand for government debt was also weak Reuters reports, as some market players are nervous that the Bank of Japan could reduce its bond-buying when it reviews its policy in March, a market participant said. 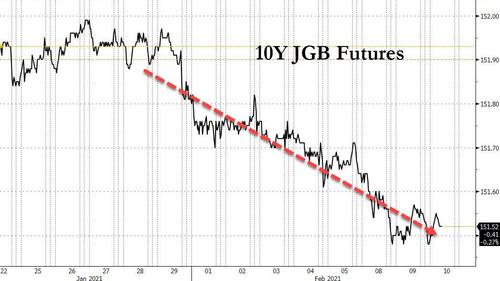 So far Kuroda has kept quiet, but it is only a matter of time before the BOJ – which has become the only marginal price setter in Japan’s massive bond market – flexes its YCCing muscle and shows those pesky sellers who’s boss.

‘Build Me An Ark’: The Tsunami Of Risk Of Tesla-Bitcoin-Cathie Wood Is Coming

‘Build Me An Ark’: The Tsunami Of Risk Of Tesla-Bitcoin-Cathie Wood Is Coming