For a few hours this morning it seemed that all was lost for r/WallStreetBets and their crusade to teach Wall Street billionaires a lesson, when one exchange after another banned buying in the most-shorted stocks, an unprecedented unilateral decision made by brokerages (one of which, Robinhood, is effectively joined at the hip with hedge fund Citadel, which in turn is a part owner of Melvin Capital which was destroyed by the short squeeze that Robinhood banned, so a clear conflict of interest), and one which sent GME stock as low as $112 after trading at $500 just hours earlier. 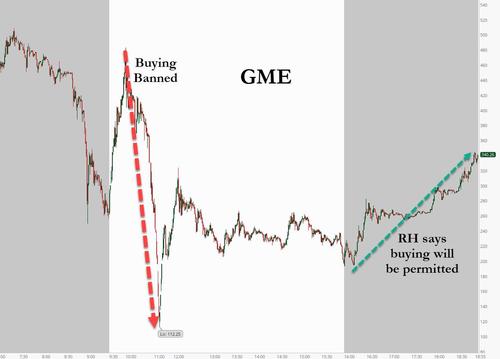 However the hedge funds short Gamestop, who may have declared victory prematurely, had to put the champagne back on ice because just after the close, amid tremendous pushback from clients, Congress, and the public – not to mention what appears to be a liquidity crisis as millions of accounts bailed – Robinhood announced it would allow buying to resume on Friday, sending the stock up almost double after hours.

And since any victory for the WallStreetBets crowd means the short squeeze is back, it also means that a defeat for hedge funds, as can be seen in the chart below which shows that the Goldman most shorted basket is a mirror image of the Goldman hedge fund VIP basket.

In other words, any expectation that the WSB crowd would be finally crushed today and the hedge fund world would return to normalcy was crushed.

But what happens next, and how does it all end?

Last night we speculated that if indeed there are more shorts – both synthetically or otherwise – than available shares, then the only place bearish hedge funds will be get shares to cover their shorts is from the company itself. Which means that Gamestop can theoretically ask for any price (somewhat reasonable) and hedge funds will have to agree. After all, it’s not GME’s fault that hedge funds were so greedy they overshorted the company, which really is what all this boils down to.

The only wait out of this for the shorts may be to beg for the company to sell them stock. And GME can name any price https://t.co/4785L2P3VB

Of course, that is a bit of an idealistic take, one where hedge funds finally are forced to pay for their stupidity. Alas, in a country as corrupt as this one, that’s unlikely to ever happen. Still, that doesn’t change the fact that the answer suddenly matters extremely.

In fact, as JPM’s Andrew Tyler writes in his EOD market intelligence note, “Are we there yet” -i.e., is the squeeze over –  is “the biggest question and hardest to answer definitively.”

Here is his take.

In short, expect much more pain. No surprise there. What we find shocking however is that just yesterday another JPMorganite, Marko Kolanovic published a note urging clients to do just the opposite, BTFD, claiming that the WSB fiasco would be over soon and won’t have any material impacts. In retrospect, we now know which report was meant for the “good” clients, and which was one the mindless fodder meant for general consumption.