Update 745pm ET: And just like that, 1 hour after reddit locked down its notorious r/WallStreetBets forum, it has returned, and not only that but the chaos over recent events just assured that tomorrow it will have a record day in new members. 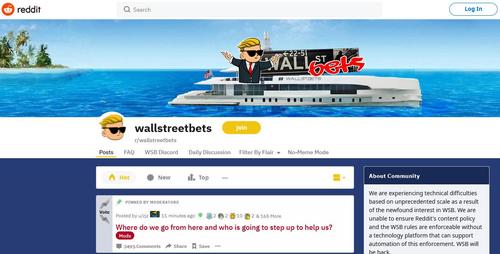 The forum’s return came shortly after another notorious daytrader, Dave Portnoy vowed revenge for the downing of the portal, and in addition to revealing that he owns $1MM of AMC and NOK and may buy more, said that tomorrow would be the biggest day yet.

(Im not a financial adviser. Don’t listen to me) pic.twitter.com/oYrsPOz8Vx

More importantly, however, after tumbling earlier following the news of WSB’s lockdown, the most shorted stocks have again exploded higher with GME surging from a low of $220 back to $300… 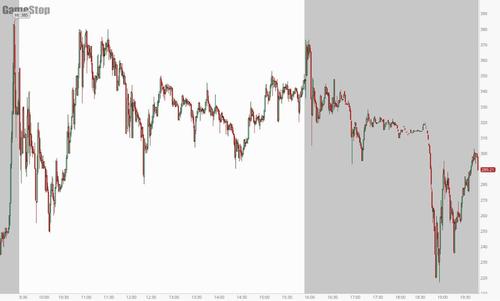 … and AMC last trading at almost $15 after dropping as low as $11 earlier. 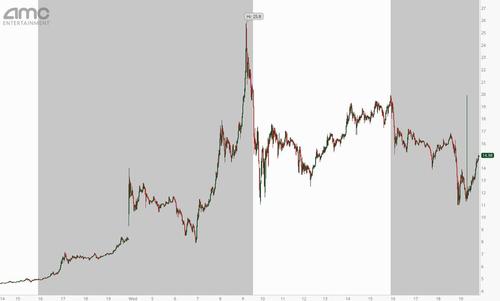 Update 645pm ET: The infamous r/WallStreetBets subreddit which destroyed at least one hedge funds. and even cost legendary trader Steve Cohen 10-15% in losses in January…

… has “gone private”, which means that only people who are invited can join. 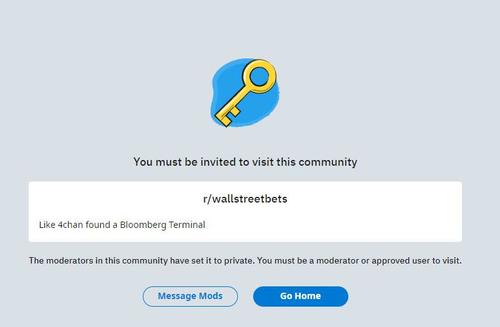 The move comes just moments after we showed that today was an absolute record day for WSB, which had a whopping 800,000 people join it in one day, the equivalent of $1.1 billion in stimmy checks..

And since it will be that much more difficult to bring new entrants to the forum, it is hardly a surprise that the most shorted stocks which exploded in recent days, are suddenly tumbling with GME down almost $100 after hours on the news… 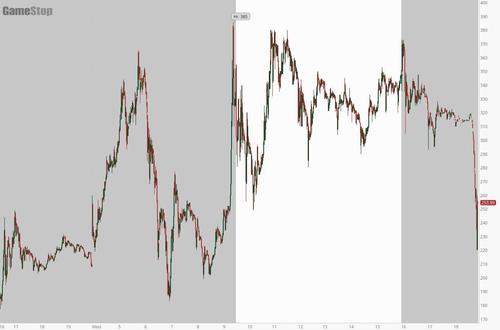 … and AMC is tumbling too. 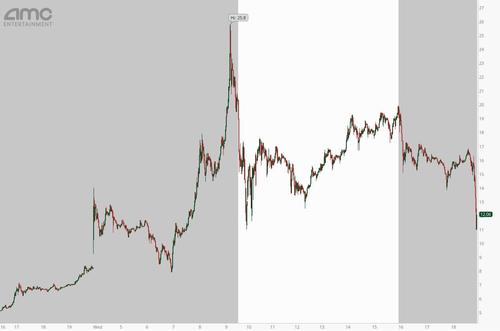 So it is over? We doubt it: while the original subreddit may well have enough critical mass to continue its bull raids for the time being, it’s only a matter of time before the members regroup and find a venue that welcomes them.

To be sure, the “autists” are not happy, and have a simple message: “FUCK WALL STREET, FUCK THE SHORTS.”

Update 625pm ET: Until now, the only sure way to be shut down by a silicon valley tech titan was to be a conservative website or twitter account. Not anymore: as of this evening, the wrath of the tech giants has converged with that of the largest US hedge funds, and according to The Verge, Discord has banned the server of the r/WallStreetBets subreddit.

Discord told the Verge it did not ban the server for financial fraud (because there was none)  but rather because it continued to allow “hateful and discriminatory content after repeated warnings” which of course is not only laughable, but has become the generic excuse of Wall Street titans to shut down anyone they don’t want “polluting” the internet airwaves which it now appears a handful of billionaires decide who can and who can’t be on.

One wonders which hedge fund – Citadel or Point72 – made a quick call to the Discord board to make sure the massive short ramps cease.

The server has been on our Trust & Safety team’s radar for some time due to occasional content that violates our Community Guidelines, including hate speech, glorifying violence, and spreading misinformation. Over the past few months, we have issued multiple warnings to the server admin.

Today, we decided to remove the server and its owner from Discord for continuing to allow hateful and discriminatory content after repeated warnings.

To be clear, we did not ban this server due to financial fraud related to GameStop or other stocks. Discord welcomes a broad variety of personal finance discussions, from investment clubs and day traders to college students and professional financial advisors. We are monitoring this situation and in the event there are allegations of illegal activities, we will cooperate with authorities as appropriate.

The question now is whether reddit will do the same to r/Wallstreetbets as it did to r/Donaldtrump and bans it and, if so, does it mean that any young enterprising trader is just as bad as the MAGArs in the eyes of the tech establishment.

Update 5:55pm ET: In a day when regulators, brokerages, and even the administration launched a full-court press to halt the marketwide short squeezes launched by Robinhood daytraders armed with stimmy checks and inspired by Reddit’s forums – because a few hedge funds complained or were put out of business – Reddit’s infamous WallStreetBets, the alleged origin of many of these bull raids, has published a response to the SEC. We present it without commentary.

“To the SEC retards in this sub: go fuck yourself. Why don’t you start investigating why companies can shut down trading so their hedge fund buddies don’t lose money. But when people lose money it’s completely okay. Eat a dick,” r/WallStreetBets said, which has already garnered 122k upvotes.

Reddit users of r/WallStreetBets were apparently trashed all day by CNBC hosts and guests, with some calling average retail investors “unsophisticated.” Well, if they were so “unsophisticated,” then the question begs, how did a bunch of millennials on the Reddit forum unleash one of the biggest “mother of all short squeezes,” and during the process, blow up multiple hedge funds who were overleveraged in Gamestop short positions.

One Reddit user said, “SEC I have proof of malfeasance. A group of hedge funds shorted the ever-living fuck out of GME putting themselves in this position. What repercussions should they face? Or is it because they’re somehow better than retail investors they shouldn’t face any penalties? We. Like. The. Stock.”

“Hedge funds simply got cocky and made the incredibly idiotic move of reaching 140% shorts in a stock. If we hadn’t seen that, someone else would and the result would be the same. Because that’s obviously going to bite you in the ass. There’s nothing coordinated or sophisticated about it. It’s legit dumber than anything I’ve ever seen in this sub and I’ve been here a while,” another Reddit user said.

But, “what it?” Well, the following post by the so-called WSB chairman (with 190K followed), and which was liked by Elon Musk, reveals the thinking of what happens next… 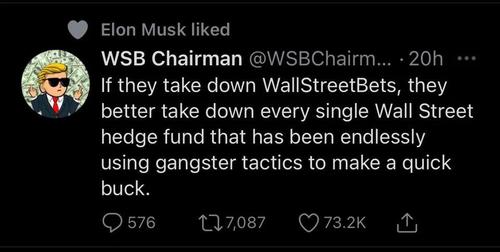 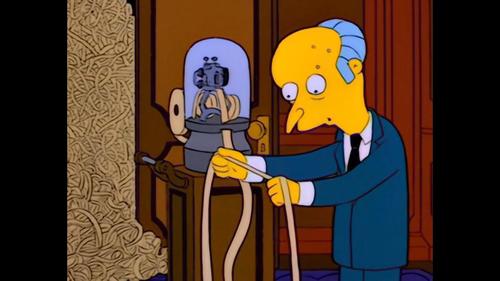 … The SEC released a statement Wednesday after-hours echoing Uncle Jone, that it too was closely following the insanity in the market.

“We are aware of and actively monitoring the on-going market volatility in the options and equities markets and, consistent with our mission to protect investors and maintain fair, orderly, and efficient markets, we are working with our fellow regulators to assess the situation and review the activities of regulated entities, financial intermediaries, and other market participants,” Acting Chair Allison Herren Lee Pete Driscoll, Director, Division of Examinations Christian Sabella, Acting Director, Division of Trading and Markets wrote in a statement. 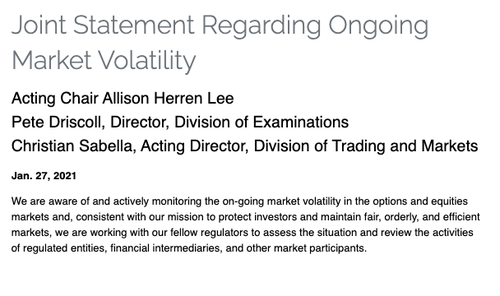 While the SEC’s did not mention individual company names, it was clear that the the was referring to the monster moves in the various most shorted names, including the extensively discussed explosions in Gamestop, AMC, BlackBerry Limited and countless other shorts which r/Wallstreetbets went after in hopes of forcing short squeezes.

GameStop’s parabolic rise – which has become a poster child of all that is wrong with this bubble market – is a clear reminder of the Dot Com bubble insanity. Even fund manager Michael Burry who was long Gamestop, called the move “unnatural, insane, and dangerous.”

Sure enough, in a hint of what may be coming, overnight William Galvin, Massachusetts’ top securities regulator, said today that Gamestop trading could suggest something is “systemically wrong” with the market. Around midday, TD Ameritrade told clients that it would impose restrictions on certain trades involding GME, AMC and other stocks… 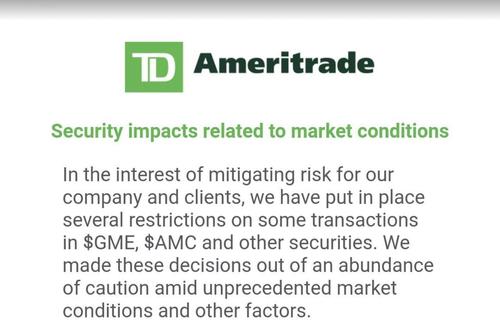 … ahead of what may be a marketwide halt in trading in these names as hedge funds come crying to mommy.

Already some industry watchers are speculating that it is only a matter of time before Reddit will be subpoenaed to explain how a bunch of teenagers destroyed a hedge fund.

The subpoenas will be for the purpose of doxing r/WSB posters, not for anything Reddit has done. https://t.co/Imj5GF9pCz

Also earlier, the CEO of Nasdaq, Adena Friedman, suggest a halt to trading to allow big investors to “recalibrate their positions’ to combat reddit users

Then again, the ramp may continue for a while because after being asked explicitly on at least two occasions, uberprinter Jerome Powell refused to answer questions related to Gamestop’s parabolic rise, suggesting that the bubble is only going to get bigger.

WATCH: Democrat Uses ‘Fine People Hoax’ in Hearing, Gets Fact-checked on the Spot